In My Own Backyard – Talented People

Last time I shared with you the beauty of spring and favorite places in my neighborhood.  Now I’d like to introduce you to a very talented artist right In My Own Backyard. 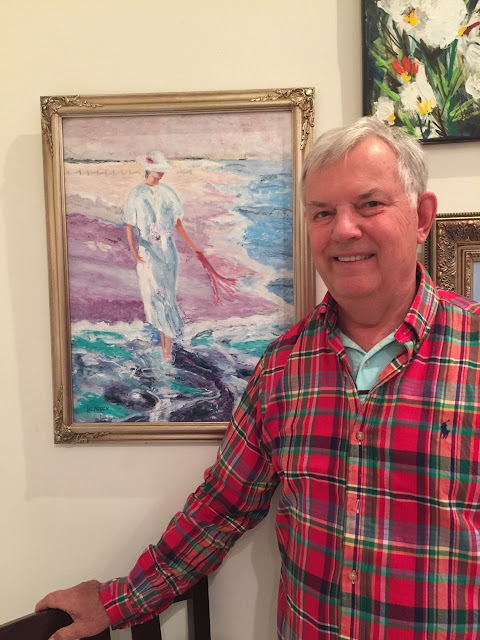 After retiring from a successful career in business, Rich (known to friends and family as “Bink”) decided it was time to do something he had always wanted to do – paint.  After all, his mother had done some painting and his son is a gifted artist, so…how hard could it be??

Well, as it turned out…..not very hard at all.


Bink’s desire to paint grew out of his love of photography.  He started shooting with a Nikon camera 50 years ago.  As he puts it, “Looking at things in a certain way began with my camera and has helped my painting.  My mother was an antique Dealer.  We would go and buy out house contents.  She would say, ‘Look at this piece of furniture!’  She helped me see the beauty in so many things.  I was a businessman for my career, but messing around with Art is really who I am.”


From the moment Bink picked up a paint brush seven years ago, he has been covered in paint and accolades.  He still goes for weekly art instruction to the Academy of Fine Arts in Philadelphia.  Even the most successful opera singers continue to work with voice teachers and coaches throughout their careers.   His works have won numerous, prestigious awards and 20 of his best are currently on exhibit at The Lion’s Mane at 11th and Pine in Philadelphia.  Naturally, I couldn’t wait to check it out.

So, on a bright, sunny day, my friend, Earline, and I took the train from Haddonfield, New Jersey, to a Philadelphia neighborhood that holds many fond memories for me.  More about that later. 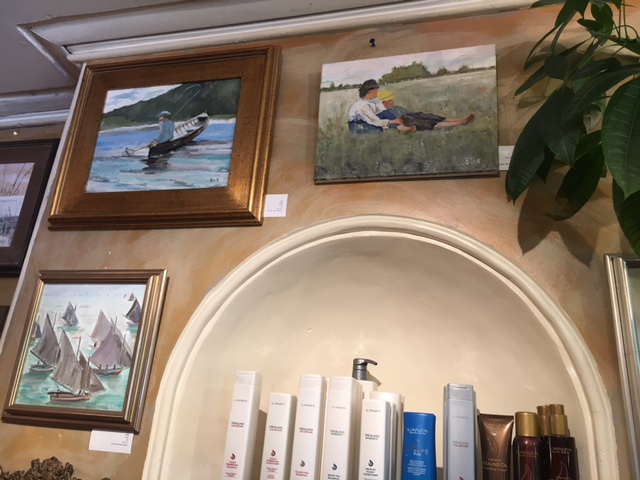 The Lion’s Mane is a charming little hair Salon whose equally charming owner, Marcus, has been promoting local artists for more than 15 years, and every inch of available wall space is taken up with Bink’s paintings, about a third of which have “sold” signs on them.  Way to go, Bink!!

The Salon is located in the heart of what is affectionately known as Philly’s Gayborhood, with its distinctive rainbow markers on street signs and fluttering banners.  The Gayborhood gave birth to the Philadelphia restaurant renaissance, which began in 1970 when a 23-year-old Frenchman, Georges Perrier, a recent immigrant to the US who barely spoke English, opened the original Le Bec-Fin restaurant at 13th and Spruce.  He would later move to larger, more opulent quarters in center city, but the magic all started in that tiny restaurant at 1312 Spruce Street.


When I was a little girl growing up in a suburb of Philadelphia, the Gayborhood was referred to as Antique Row.  Antique Dealers large and small jostled for every inch of real estate space.  If you have followed my Blog, you know that I grew up surrounded by actors, singers, musicians and artists.  Even my father, an Engineer by day, was a talented violinist and had a beautiful tenor voice.  Everyone else either made their living or had made their living in the theater.  I learned early on that there is no such thing as a “former” actor.  I learned later on to my surprise that there were, in fact, other options in life.  Who knew?

Two of my actress Grandmother’s most frequent visitors were Nicholas and Jerome.  I think she had worked with Jerome’s mother.  I adored Uncle Nicholas (no one ever called him “Nick”) and Uncle Jerome.  They were antique Dealers on Antique Row.  They would often invite me for weekends in their gorgeous Victorian home, which was stuffed to the rafters with the most amazing treasures and, even more amazingly, I was given free rein to explore.  I had my own little Queen Anne chair in the front Parlor.  Uncle Jerome told me no one was allowed to sit in that chair except royalty and, thus, it was reserved for their little Princess (moi).  Of course, it didn’t occur to me that the chair was so tiny no one else could possibly have sat in it except me and their white Persian cat, Arabella, who apparently occupied it when I wasn’t there.

Nicholas was tall, dark, thin and quite serious with a posh British accent like my Grandmother’s.  Jerome was small and round with an unruly head of sandy hair and mischief in his eyes.  He always looked as if he were “up to something” even when he was sitting still.

There were always new acquisitions to show off on my visits.  They would look them over very carefully and Jerome would say, “We can fix this,” whereupon Nicholas would shake his head slowly and say, “If you fix it, you will ruin it!”

Bink’s Exhibit at The Lion’s Mane (1133 Pine Street) runs through August 14th.  For more information call Marcus at 215-925-0366. I also urge you to take the time to stroll through this wonderful neighborhood while you are there.

For information on Bink’s artwork, check out Richard Heacock’s website on Tumblr.

In My Own Backyard

In My Own Backyard -- Maison Marcellé

Posted by Marie-Thérèse at 5:05 PM