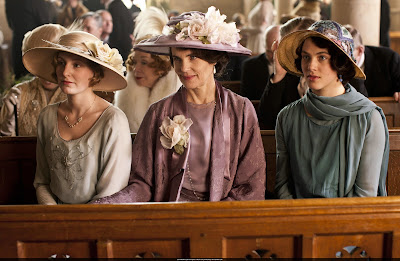 Sunday nights have just not been the same since Matthew’s fatal car accident in the Season 3 finale of “Downton Abbey.”   Honestly, I never saw it coming and, apparently, neither did he.


Of course, I still make my usual special Sunday dinner, but ooooh how we looked forward to 9:00 pm, by which time we were ready to savor our aged stilton, ruby port and the next delicious episode of the lives and loves of the Crawley Clan.


I found the first episode somewhat interesting and waited to be drawn into the lives of the Selfridges and their employees.  After watching last night’s episode, I can only say that I am still waiting.


While some of the ancillary characters caught my attention and there were some tantalizing glimpses into the revolutionary marketing strategies he employed (such as moving perfume counters to the front of the store, which had never been done before), too much time was spent on Mr. Selfridge’s tawdry affair with a music hall singer of dubious character and even more dubious vocal talent.


It’s obvious that a great deal of money was spent on the making of “Mr. Selfridge,” but so far, at least, it all feels a bit cheap and superficial to me.  The wardrobes of the upper-class ladies look more like costumes than clothes they might actually have worn and lack the richness of fabric and exquisite detail of the ladies of Downton Abbey.


And then there are the hats…..  The ladies’ hats in “Mr. Selfridge” are huge, over-the-top and look as if they could only be worn by Las Vegas showgirls.


Not so in “Downton Abbey.”  Here are a few of my favorites: 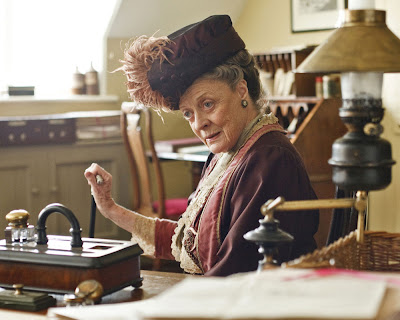 The hats worn by the ladies of Downton Abbey are not only magnificent works of art, they look eminently wearable.
And what I wouldn’t give to wear one of them…..if only for a few hours!!!
It would be a dream come true!
Actually, I did have a little Downton Abbey moment last spring.
﻿ 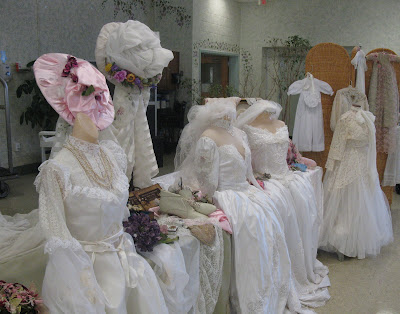 Every year, St. Mary’s Catholic Home, where my Mother lives, has a Mother’s Day party.  Last year, there was an exhibit of Victorian wedding gowns provided by a woman named Johanna.
Not only does Johanna design wedding gowns for the modern woman and costumes for Broadway, but she has an extensive collection of vintage clothes, which she exhibits around the country.
We sat, fascinated, as Johanna explained the history of each piece.
She chose a few young ladies to model some of the wedding gowns, then picked up this gorgeous blue hat, turned to me and said, “I think we need a bridesmaid.  You have a vintage face, would you like to be our bridesmaid?”
I did wince a bit at the words “vintage face,” since it’s not something a woman of my age likes to hear, but one look at that hat and I knew that this was my Downton Abbey moment.
﻿ 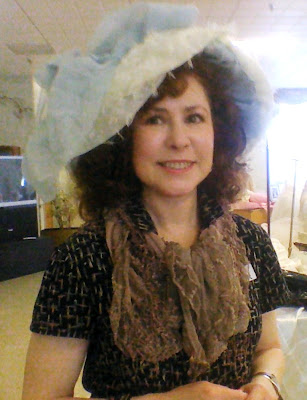 Some lucky bridesmaid wore this gorgeous confection in the late 1800s.  Although it looks light as a feather, it is actually quite heavy and would have required numerous hat pins to stay solidly in place.
I like to think that she had a sweet, young face and was dreaming of her own wedding as she stood next to the bride.
Whoever she was, I am grateful to her for my Downton Abbey moment.
For more information on Johanna, contact her at:  JoBoutShowtime@aol.com
﻿
Posted by Marie-Thérèse at 5:09 PM