I’ll Have (Monsieur) Champagne With My 15 Minutes of Fame

In 1968, Andy Warhol said, "In the future, everyone will be world-famous for 15 minutes." Give or take a few minutes, weeks or months, I think Warhol was on to something.

About 15 years ago, Lisa, the wife of a young man who worked with my husband, was living a quiet life in suburban New Jersey when her 15 minutes of fame came calling in the form of an appearance on the Oprah Winfrey Show. Her friends had nominated her and the staff at Oprah’s show had selected her for a makeover to be done by the then wildly popular British Do-Over Duo, Trinny and Susannah.

They flew Lisa to Chicago where she remained incommunicado for a week of intensive hair, make-up and clothing therapy behind closed doors. Husband, family and friends would not see Lisa again until the big reveal on Oprah’s show. Until then, she was kept well under wraps.

On the afternoon of the show, we were all watching as the curtain opened and a drop-dead-gorgeous Lisa in leather jacket, skinny jeans and stilettos strutted confidently to center stage. Having just seen the “Before” footage of a pretty, but frumpy, young woman in over-sized clothes, the audience whooped and hollered their approval. Even Oprah seemed momentarily lost for words. It was a stunning transformation.

While the clothes and makeup were fabulous, for me, it was all about the hair. The cut and the color set off her delicate features to perfection.

Lisa’s celebrity lasted for months after her return, and she patiently answered all our questions. 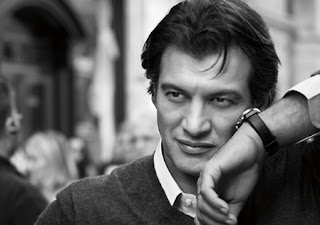 The first thing I asked her was, “Who did your hair?”

“Some French guy with a really strong accent,” she replied. “I think his name was Frederick....something.”

“Do you mean Frédéric Fekkai?” I asked.

“Yeah, that’s it,” she responded. “He never spoke to me directly. He’d look at my hair and shout orders at his staff. He must have changed the color four or five times. He was still tweaking it up to the last minute.

“Right before I went on, I reached up to touch my face and he screamed at me, ‘DON’T TOUCH THE HAIR!!’.” 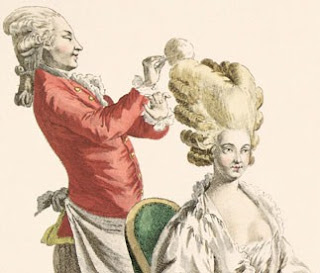 Until the early 1600s, the hair of a wealthy Monsieur was in the hands of his valet de chambre, while Milady’s locks were entrusted to her personal maid.

That is, until a young man arrived in Paris and single-handedly redefined the métier of dressing hair for women.

In the talented hands of Monsieur Champagne, as he called himself, hair dressing rose to the level of high art, and the word coiffeur was invented to describe this new artiste.

We know nothing about the life and background of the first celebrity hairdresser, not even his real name. But we do know a great deal about his work and the influence he had on his devoted clients.


﻿
﻿ In true celebrity hairdresser fashion, M. Champagne rewarded them for their love and devotion with everything from exquisite disdain to scorn and verbal abuse.

Apparently, they couldn’t get enough. They showered him with expensive gifts and much more intimate favors, desperate to keep themselves on his A List of clients.

When Princess Marie de Gonzague married Wladyslaw IV, King of Poland, by proxy, in Paris, it was M. Champagne who placed the Crown on her head so as not to disturb the Princess’s coiffure. 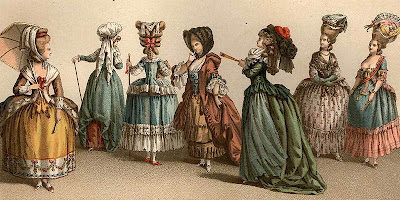 ﻿Suddenly, scores of high-profile women all over Paris feared showing their profiles in public unless M. Champagne had first worked his capillary genius. It was even rumored that one besotted Lady had M. Champagne kidnapped the night before a wedding at the Court of Versailles so that she would have the exclusive benefit of his……magic hands.

Imagine that --- women were worrying about Bad Hair Days 400 years ago !!  Plus ça change, plus c’est la même chose.

For better or worse, the legacy of the first Celebrity Hairdresser is alive and well in the 21st Century. I just hope I make M. Champagne's A List when the time comes for my 15 minutes of fame.