It’s Wednesday morning, May 16th, and you are waiting on the RER platform in Paris for the C train still feeling a wee bit gris after a late night with friends. You glance at your watch and tap your foot impatiently. Running late as usual, but this morning you are meeting with a German businessman, and the Germans are always annoyingly punctual.

Finally, the train arrives and you push and shove your way into the car.

The French have found yet another brilliant way to celebrate and showcase their beloved patrimoine.


﻿
﻿﻿﻿The SNCF, France’s National Railroad service, in partnership with the City of Versailles and the Château de Versailles have elegantly redecorated six cars of the RER C line that serve the City of Paris and four départements of the Ile-de-France region.


﻿ Quietly and without fanfare, on the morning of Wednesday, March 16th, the six Château-décor cars were sent out for their maiden run to the astonishment of commuters lucky enough to find themselves stepping inside and back in time.


﻿
﻿By the end of the year, it is expected that the full fleet of Château-décor trains will be in daily service, serving all 36 stations of the RER C line.


﻿﻿
﻿ The trompe-l’œil effect is obtained by the use of polished plastic film panels made from photographs of Versailles. These photos are then adapted to the specific dimensions of the car and glued to the walls and ceilings. There are seven different decors that range from the grandiose to the more intimate corners of royal life.


﻿﻿
﻿ According to Bénédicte Tilloy, the Director General of the SNCF, although vandalism is a growing problem on the RER, the hope is that vandals will be dissuaded from doing their worst by the sheer majesty and beauty of their surroundings. But, just to be on the safe side, the materials used in the panels are graffiti and tag resistant, and Madame Tilloy assures us that ripped panels will be replaced as quickly as possible.

A bit of a risk? Perhaps. But, as the French say, “Qui ne risque rien, n’a rien” -- nothing ventured, nothing gained. And if we can gain a little beauty in our lives, it’s worth the risk.
Posted by Marie-Thérèse at 3:37 PM 4 comments:

Are You Going to Make Me Wear a Scarf? 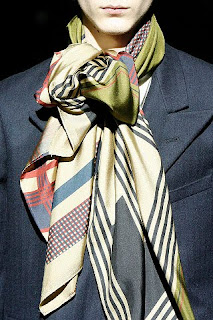 I recently had the great pleasure of writing a Guest Blog post "Are You Going to Make Me Wear a Scarf?" for my favorite Blog "A Femme d'Un Certain Age.

This fabulous Blog is written by, hands and laptops down, the best little Blogger in the Business, Tish Jett.

If you are not already familiar with Tish's Blog, I invite you to stop by to check out my article and get to know Tish and her marvelous circle of friends.

You will be sooooo glad you did. 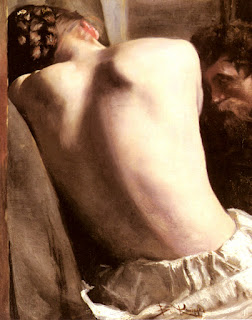 From the fleshy folds of a Rubens to the elongated lines of a Modigliani, the female face and form have inspired centuries of artists to create the timeless masterpieces that fill the walls of museums and private collections. 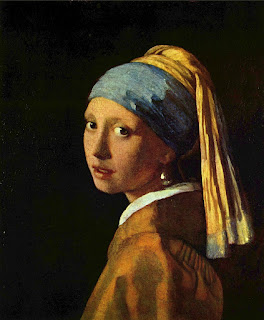 By and large, we know little or nothing about the women who posed for these artists or why they did so.

Some did it for money, some for love; still others commissioned their portraits from the popular artists of the day.

While we admire and analyze the deftness of the master’s brushstroke, do we ever wonder about the woman who inspired it?

What was she like? What sort of life did she lead?

And what did she think about as she sat there for hours on end under the scrutiny of the artist’s eye? 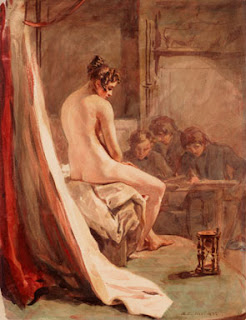 I was in my mid-thirties when I met an artist through a mutual friend.

“Have you ever been painted?” he asked.

“Well, you should be” he said. “With those skin tones and your face on the verge of becoming interesting, I’d love to paint you.”

Flattered (skin tones) and curious (an almost interesting face?), I decided to take him up on his offer.

And so I became the artist’s model. 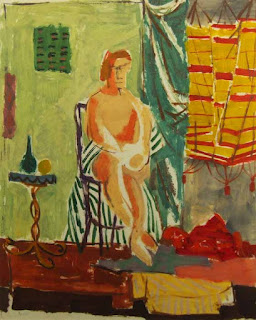 I had no idea what to expect that first day.

What should I bring? “Music that moves you.”

I arrived in t-shirt and jeans with Richard Strauss’s “Four Last Songs,” the final trio from “Der Rosenkavalier” and Wagner’s “Wesendonck Lieder.”

Almost immediately he began to sketch as I moved around the room, picked up objects arranged on a table and then sat down to examine them more closely. We were learning how to connect with one another and, to my surprise, it all felt very natural.

For the next two years we worked in his studio in the afternoons when the light was at its best. I found that my ballet training enabled me to hold a pose for long stretches of time, and my dancer’s “muscle memory” could recall the position perfectly from day to day without any prompting.

Unlike the fashion model who poses for a photographer, there is no camera lens between the artist and his model. His eye is the lens and his hand creates the image that he alone sees. 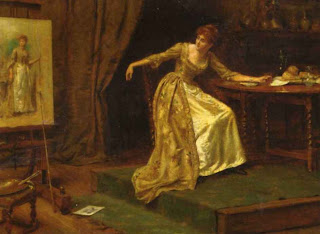 That first week, my face would start to form on the canvas when I left at the end of each session only to be completely painted over the following day when I returned, because something was just not right – the shape of the mouth or the color of the eyes…

I quickly learned to disassociate myself from the image of the girl on the canvas. She was me; and she wasn’t.

On sunny days we might work outside, although he was always careful not to expose my skin directly to the sun.

He made no demands, asking only that I not cut my hair, which was very long, and not allow the sun to color my skin.

I complied with both requests. 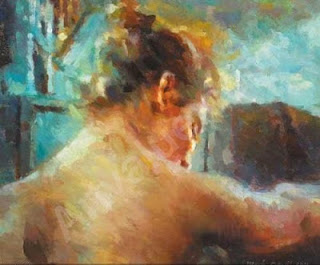 I was surprised how quickly I became accustomed to the artist’s scrutiny. It soon began to feel warm and comfortable, like the tender look of an old friend.

We rarely spoke while he worked. Often I forgot he was there.

With my body locked in position, my mind was free to move about unfettered. Sometimes I surrounded myself with music letting my mind wander where the notes took me; sometimes I sat wrapped only in the silence of my own thoughts.

The odor of paint, turpentine and gesso had a calming effect on me, and the artist’s studio became a refuge during a tumultuous period in my life. 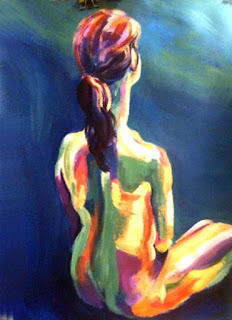 For the two years that it lasted, ours was a relationship of intense intimacy at a distance. I don’t remember that he ever touched me with anything but his eyes.

I once asked him something I had long been wondering about.

He thought for a moment and then replied…..

“I know when a painting is finished when one more brushstroke will diminish it.”