At any given moment a man knows exactly how many pairs of shoes are in his closet, usually between five and eight. Just ask him. Now, ask a woman that question and she will start to hum, roll her eyes upward as if seeking divine inspiration, want to know if that includes boots and shoes she’s never worn or maybe only once, and then throw up her hands and say, “Gee, I don’t know – I guess, somewhere between 50 and 100? Maybe more?” 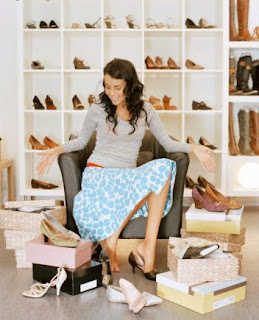 Why do we have so many shoes that we can’t keep track of them? Because we can’t stop buying them, because we love them.

We love wearing them; we love trying them on; and we really love buying them.

Buying a new pair of shoes is instant gratification. You don’t have to go into a dressing room and take off your clothes in front of an unforgiving, full-length mirror. You simply slip off your shoes, slip into the new pair, walk up and down a few times in front of a little mirror that only shows your legs from your knees down, and you know instantly whether or not you are perfect for each other. 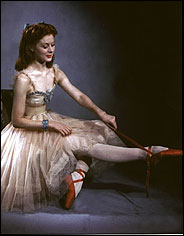 The first pair of shoes I fell in love with was Moira Shearer’s enchanted ballet slippers in the film “The Red Shoes,” in which a ballerina literally dances herself to death in the most gorgeous pair of red satin ballet slippers I had ever seen.

I was convinced of the magical powers of those ballet slippers. If only I could trade in my pink toe shoes for those red satin ones, I would surely become one of the world’s greatest ballerinas! 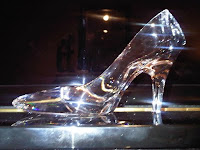 And then I saw Walt Disney’s film “Cinderella,” and I fell head over heels in love – not with Prince Charming, but with those shoes. I knew from that moment on that I would spend the rest of my life looking for that perfect pair of shoes, those magical glass slippers that would transform me into a princess.

Who needs Prince Charming when you can have those shoes? 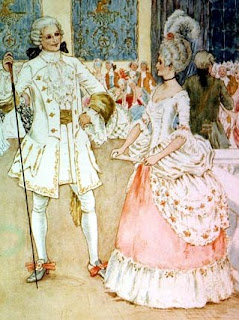 While most men do not understand the shoe-obsessed women in their lives, in fact, the original, shoe-obsessed sex was not the feminine sex at all.

Throughout most of the history of western civilization, shoes were far more important to a gentleman’s attire than to a lady’s. From the Middle Ages’ doublet and hose through the Colonial period’s knee breeches and stockings, a gentleman’s legs and feet were very much on display, while a lady’s feet were barely visible under her voluminous skirts.

The well dressed gentleman chose his shoes very carefully to show both his foot and his shapely leg to advantage. 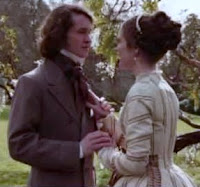 Even into the 19th Century men were still extremely particular about their footwear. In Charles Dickens’ beloved novel “David Copperfield” the title character dons a pair of new boots several sizes too small to impress his lady love with the fashionably small size of his feet. 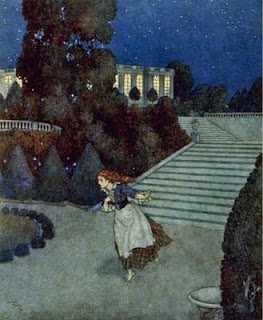 Walt Disney’s screen version of Cinderella was adapted from a tale written in 1697 by a Frenchman named Charles Perrault, who adapted his version from the original story written by the Countess of Aulnoy, who clearly knew a thing or two about the shoe-obsessed men of her era.

In the Countess’s version, Cinderella does not go to the ball in a pair of glass slippers, but in a tiny pair of red velvet, pearl-encrusted, high-heeled mules. Try running to catch the last pumpkin out of town without losing one of those babies on the way!!

She and Prince Charming never even meet at the ball, much less share a dance.

The Prince finds that perfect little shoe the next day and falls hopelessly in love – not with the owner of the shoe, but with the shoe itself, becoming so obsessed with it that he stops eating, sleeps with it under his pillow and refuses to leave his room.

Realizing that this peculiar relationship is not likely to produce any heirs to the throne, the desperate King and Queen decide to act. In the hope that their son will transfer his affections from the object itself to the owner of the object, it is they who launch the kingdom-wide search for the mysterious lady who lost the shoe. 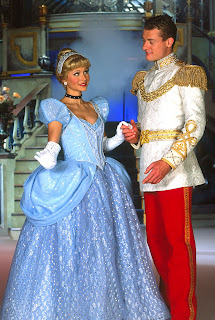 In the end, the Countess tells us that Cinderella and her Prince do meet, fall in love and marry, thanks to a tiny pair of red velvet, pearl-encrusted, high-heeled mules.

I like to think that instead of honeymooning in Barbados, Cinderella and her Prince Charming went shoe shopping in Paris.

And the moral of the story is -- if a girl wants to live happily ever after, she needs only one Prince Charming in her life, but she can never have too many shoes.
Posted by Marie-Thérèse at 11:49 AM