Water and Wine and a Touch of Divine

While I was lucky enough to go to University on a full scholarship, I still needed to keep body and soul together, as did many of my schoolmates, so I worked nights and weekends in a large department store. My friend, Fran, had a much more interesting way to keep body and soul together. Fran was a cocktail waitress at night and a Religious Studies major by day hoping to learn the secret of how to turn water into wine as Jesus had done at the Marriage Feast of Cana.

The miracle at the marriage feast of Cana was Jesus’ first miracle in public; I like to think of it as his coming out miracle. He would go on to heal lepers, cure the sick, feed the multitudes and raise the dead, but this miracle is my personal favorite. 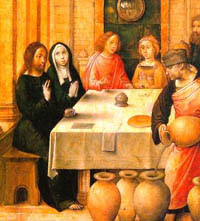 If you don’t know or have forgotten the story, this is how it goes.

Jesus and his Mother, Mary, are guests at a wedding feast in Cana. During dinner the wine runs out. Did the caterer miscount? Did guests show up who hadn’t R.S.V.P’d? (Don’t you just hate it when people do that??!) Did single guests arrive unexpectedly with dates? The Bible never tells us.

All we know is that Mary tells Jesus the wine has run out and he responds by saying “What do you want me to do, Mom? It’s not yet time for me to show the world who I am and what I can do.”

Jesus turns and walks away, appearing to ignore his Mother’s unspoken request; but Mary has faith in him. After all, who knows a man better than his own mother? She takes a waiter aside and says, “Do you see that handsome young man over there? He’s my Son. Do whatever He tells you to do. Trust me.”

Sure enough, Jesus walks into the kitchen and tells the staff to fill six large jugs with water and take a glass of the water to the wine steward. A few minutes later, the surprised wine steward comes running into the kitchen demanding to know why this delicious wine was not served until the end of the feast. I wonder if the caterer got blamed for that one.

As far as I know, no one since Jesus has managed to turn water into wine, not even my friend Fran. Let’s face it, that’s a pretty tough act to follow; but that hasn’t stopped priests and monks over the centuries from experimenting. The most prolific and successful of these ecclesiastical experimenters have been the Benedictine monks, who clearly do not spend all their time in prayer and contemplation. They have found time to create such delicious liqueurs as B&B (Benedictine and Brandy) and Chartreuse. 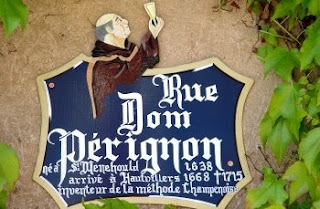 In the 17th Century, a fat little Benedictine monk, the cellar master at the Abbey of Hautvillers may have done the next best thing to turning water into wine.

While experimenting with a new technique, an act of divine intervention in the form of an exploding bottle sent him running through the monastery. Breaking his vow of silence, he began yelling at the top of his lungs, “Come quickly, Brothers, I am drinking stars!”

And so it was that Father Pierre Pérignon, known as Dom Pérignon, created a drink that lets ordinary mortals commune with the Divine with one sip. And from that day to this, no celebration or marriage feast from Cana to Canberra is complete without it.

In 1945, when the local parish priest, Father Félix Kir, took office as the Mayor of Dijon, he found that the Germans had confiscated the best wines from Burgundy during the war leaving his region with little more than inferior whites. And to make matters worse, a delegation of important dignitaries were due at any moment. What would he serve them? The honor and reputation of Dijon were hanging in the balance. What to do? Father Kir prayed fervently for divine inspiration.

Suddenly, it came to him. 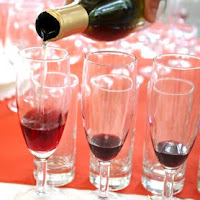 Father Kir poured a small amount of crème de cassis de Dijon (blackcurrant liqueur) into a wine glass and topped it with a large amount of Bourgogne Aligoté (a lesser white wine). The aperitif was an instant hit and quickly became known as a Kir in honor of its creator. It remains to this day the most popular aperitif in France and my personal favorite. 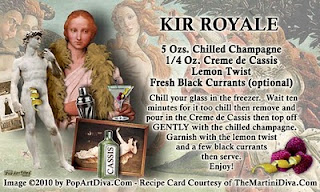 Although the most popular variation of the classic Kir is the Kir Royale, made with champagne, there are endless variations with which you can experiment.

You can add any liqueur you choose: peach, raspberry, blackberry or pink grapefruit.

You can vary the amount of liqueur to please the eye and the palate. Add more and your Kir is sweeter and deeper in color. Add less and it is dryer and lighter in color.

However you make it, I think you will agree that the Kir is quite simply divine.
Posted by Marie-Thérèse at 10:31 AM 7 comments:

The other night I curled up on the couch with a glass of wine and watched one of my favorite guilty pleasure movies for the umpteenth time. When “The Turning Point” was released in 1977 many critics were less than kind, the ballet world was dismissive and it won no academy awards, but that didn’t stop millions of young women from falling in love with it. 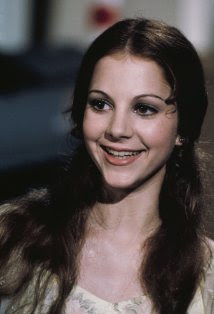 Leslie Browne was 19 years old when she danced her way into our hearts as Emilia, the small town girl who joins a New York ballet company, falls in love, has her heart broken and becomes a principal dancer all in the space of one memorable summer.

While the plot may be a bit thin, the dance sequences featuring some of the greatest ballet dancers of the era are nothing short of dazzling.


For many moviegoers, this would be their first glimpse backstage at the pain, frustration, pulled muscles and bleeding toes that are the world of ballet ----- and their first glimpse of the incomparable Russian dancer, Mikhail Baryshnikov as Yuri, captured forever in his magnificent prime. 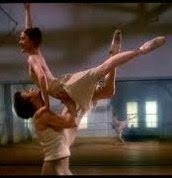 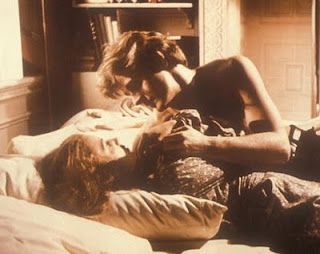 But for me, the most beautiful dance sequence in the entire film remains the one that takes Emilia and Yuri from partners in dance on the dance floor to partners in love in the bedroom, all to the music of Prokofiev’s “Romeo and Juliet.” In one of the most beautiful and sensual love scenes ever filmed, Emilia’s arms reach out and gracefully spiral down as she surrenders utterly and completely.

A decade later in another of my favorite films, “Dirty Dancing,” lovemaking for Baby and Johnny also begins on the dance floor this time to a slow, pulsating rock ‘n roll beat and ends in an explosion of passion in Johnny’s bed -- surely one of the sexiest love scenes ever filmed. 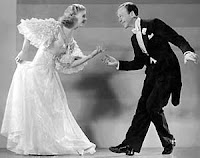 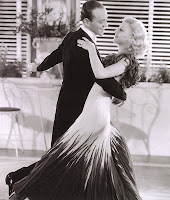 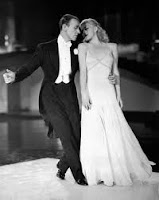 And yet, for me, the most sensual dancing duo of all time never even share an on-screen kiss, much less a night of passionate lovemaking. They don’t need to. It’s all right there in the dance, from flirtation to fulfillment. The moment Fred Astaire puts his hand on the small of Ginger’s back he is making love to her and the audience can feel it.

Katharine Hepburn said that Ginger gave Fred sex and Fred gave Ginger class. Whether or not that was the source of the Astaire/Rogers chemistry, I have no idea. But I do know that Fred had a way of touching and holding a woman that takes my breath away. 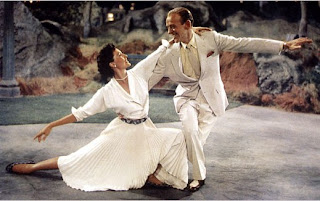 I once saw an interview with the gorgeous and talented Cyd Charisse who danced with both Gene Kelly and Fred Astaire in the 1950s.

Having hung up my toe shoes many years ago, I've spent the last 35 years with a man who cannot dance. And yet, and yet, when he puts his hand on the small of my back, it takes my breath away.