How to Become Parisian in One Hour 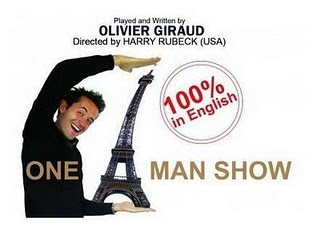 Did you know that the hottest One Man Show in Paris is in English? Every night French stand-up comic Olivier Giraud teaches an English speaking audience “How to Become Parisian in One Hour.” In his hilariously insightful show, which could easily be re-titled, “How to Become Insufferably Arrogant in 10 Easy Lessons,” Parisians may be the main target, but Americans and fellow Europeans become great comic fodder for collateral damage. And Parisians, who normally take themselves rather seriously, have been flocking to the show to see what all the fuss is about and to laugh at themselves.

Giraud’s imitation of the Parisienne walking into a nightclub with the proper look of disdain, pursed lips and a toss of the hair is worth the price of admission alone.

Naturally the arrogant waiter gets the Giraud treatment, and I don’t know anyone who has visited or lives in France who does not have an arrogant waiter story, or two. I have many of my own, and this is one of my favorites.

One evening in Paris, my husband and I sat down at the terrasse of a café for a bite. We were tired and it was late, even by Parisian standards. The café was full inside and out and the busy waiter threw two menus at us as he whizzed past. We had barely opened the menus when he reappeared stamping his foot in annoyance that we had not yet made a selection. The minute my husband spoke to me in English, the waiter rolled his eyes and stalked off.

As I looked into the café, I saw our waiter sitting at the bar knocking back shots of Armagnac. “Well,” I said to my husband, “this is a new one. I’ve never seen this before.” We may have been tired, but I was not about to give up without a fight. Besides, now I was intrigued.

By the time the waiter returned, I had decided on my plan of action – a two-pronged charm offensive à la française-américaine. I would couple my French language skills with that quintessential American quality which can be found in abundance only in America – Niceness. The French can disarm you with their charm, which they can turn on and off at will, but Americans are by far the nicest, most helpful, most sympathetic people in the world, and over the years I have seen more than one haughty Frenchman crumble in the face of it.

As he stood there in front of us tapping his foot, I looked at him, smiled sweetly and said in French, “Monsieur, you are clearly having a bad day. I’m so sorry.” The next thing I knew we were having an Oprah moment. His girlfriend had moved out the night before and a colleague had not shown up for work that day. Not only did he serve us beautifully after that, but it was Armagnacs all around on the house after dinner.

If you are going to Paris for the first time and plan on eating in a restaurant, here are a few things to keep in mind concerning the Paris waiter:

1) He is not an out-of-work actor/model/singer/musician as is usually the case in the USA. He is a professional who knows his business, which is food and wine and how to serve them;

2) As a tourist/customer, you are seen as an annoyance, ranging from minor to major depending on your behavior and his mood that day. Try not to take it personally; and

3) He will always reserve his best service for his regular customers, which, from his point of view, is good business. You will probably not return but they will.

Olivier Giraud’s One Man Show “How to Become Parisian in One Hour” can be seen at the Théâtre de la Main d’Or in the 11th arrondissement in Paris.
Posted by Marie-Thérèse at 4:10 PM