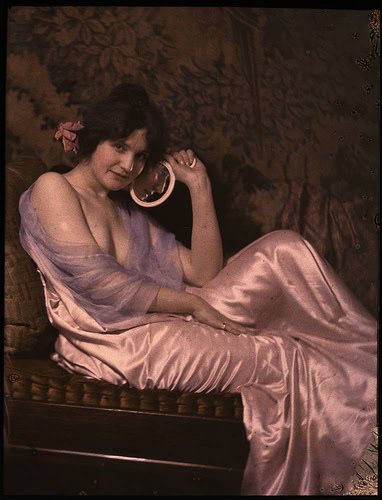 Unless you are a vampire, you probably make use of this little item several, dare I say many??, times a day, sliding it discreetly from your handbag for a quick check of hair and make-up. We Ladies take our little hand mirrors for granted. But, there was a time when most people lived and died without ever knowing what they looked like. I know, I know, there are mornings when that would be a blessing…..

Some form of the mirror existed since ancient times, usually polished metal. Then in the 17th Century, King Louis XIV of France (known as “the Sun King”) decided he needed something magnificent and monumental to reflect his dazzling presence. So he gathered together his ministers and said something to this effect, “Messieurs, I am having a little place built on the outskirts of Paris – just a modest little place – I’m going to call it Versailles. I want an entire room covered in mirrors, each one to be 6 to 8 feet high -- I’ll call it the Hall of Mirrors (La Galerie des Glaces).”

By this time, the Venetians had developed a way of making mirrors by blowing them like glass. But, again, they were incredibly fragile, and the size was limited by the lung power of the glassblower. Anything over about 6 inches was considered an incredible feat of glassblowing, much less 6 feet!

But the Sun King had spoken, and so the best Venetian glassblowers were spirited out of Italy (literally kidnapped) and they set to work with the best French glassblowers of the time and together they developed the method by which all mirrors have since been made – the method of pouring liquid glass onto metal tables, which meant that it was sturdier and could be rolled out to any size you desired.

And so, Ladies, the next time you sneak a peak in a mirror to check the reflection of your dazzling presence, think of the Sun King who made it all possible.
Posted by Marie-Thérèse at 8:27 PM No comments: