I’m not quite sure how it happened and where it all went, but being single is just a distant memory.  What did it feel like?  I forget.  40 years ago last weekend, on a sunny afternoon in Philadelphia, a young woman with high hopes and big dreams married her future to that of a young man with a wonderful laugh. 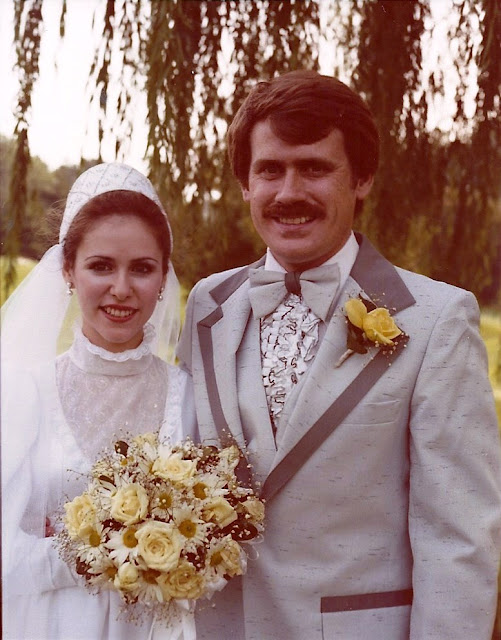 The following day, we left for Paris.  I couldn’t wait to introduce my new American husband to family, friends and the country I hoped he would come to love as much as I did.


I knew I was taking a chance.  September is a notorious month for les grèves (strikes).   It’s a way for Parisians to extend their August vacations and ease themselves into la rentrée. 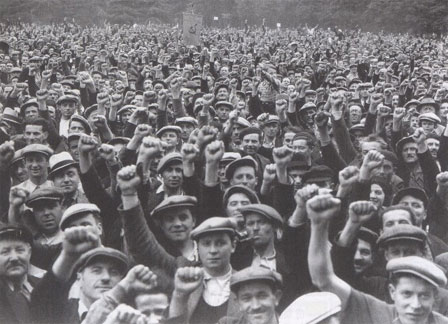 Still, I was willing to run the risk.

We splurged on a tiny hotel room in the 8th arrondissement with crooked floors, oppressive wall paper and a bathroom so small you had to sit sideways to use the WC; but we found it charmante.  It has since been renovated.

The surly gentleman at Reception was the first person to address me as “Madame.”  No longer a mere “mademoiselle,” I had now acquired the rights and privileges of my new social status as a married woman in French society.

For instance, according to an old French custom, I was now allowed to rest my elbows lightly on the dinner table and cross my hands to show off my rings.  This was an indication of the social position of one’s husband in 19th century France. 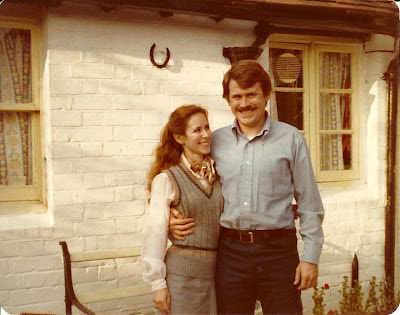 Most of the next week was spent at someone’s dining table or in their séjour sipping apéritifs.
It was one enormous, movable feast as we went from place to place visiting family and old friends, many of whom I had known since childhood.

Along the way we even managed to squeeze in a bit of sightseeing.  Dan was captivated by it all, clearly falling in love with everyone and everything Parisian. 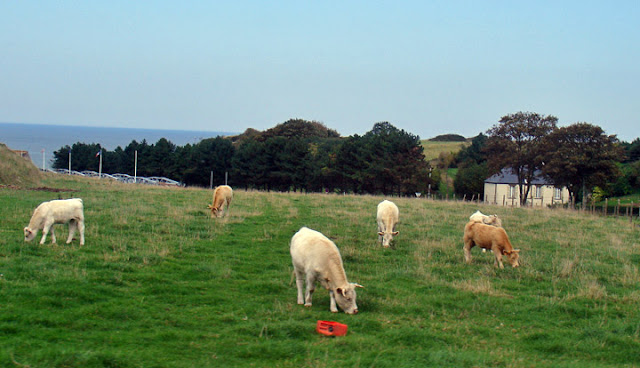 And then it was time for a weekend in Normandy with tante Jeanette and ton ton Marcel. 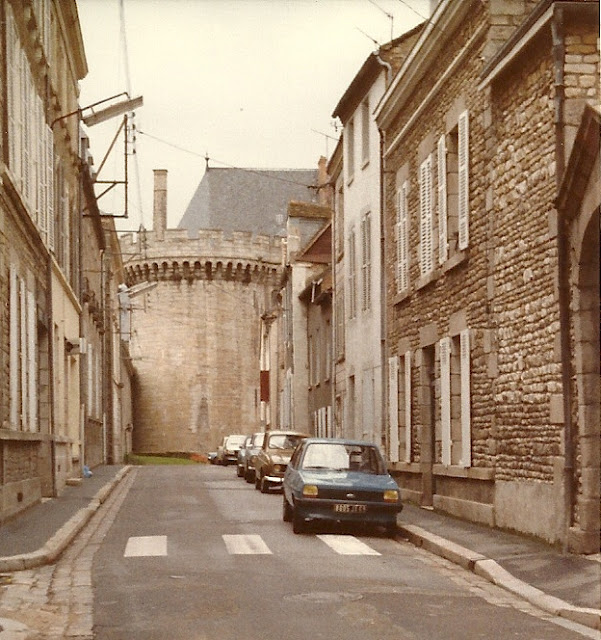 As we turned onto the rue du château, he let out a “WOW!!”

“Is this where they live?” he asked.

“Yes, this is their street,” I replied.

“What the heck is that at the end of the street?  It looks like a castle!”

“Yep, it’s the château of the Duc d’Alençon.  That’s why they call the street rue du château.  Pretty clever, these Frenchies, n’est-ce pas?” 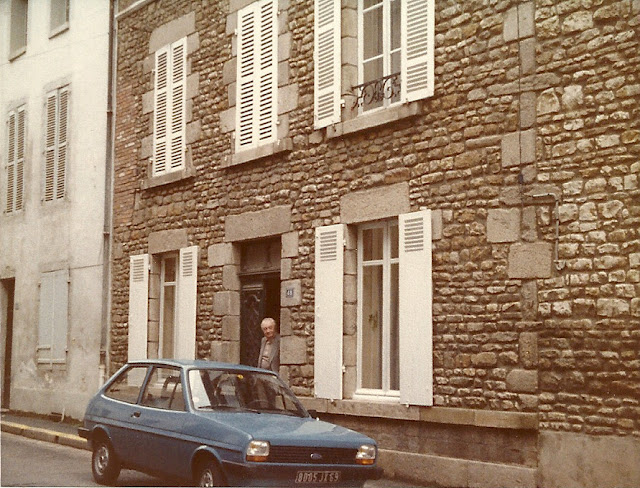 …..Hugs, kisses and tears of joy all around.

Tomorrow my two cousins would arrive with their families, but for now, there was more eating and drinking to be done.

Bags safely stowed in our bedroom, we went to the salle à manger (so many delicious memories around that table!) to join tante Jeanette, ton ton Marcel and a few old friends for apéritifs.

And there, in the dining room, I came face to face with a serious rival for my husband’s affections.

This little terrier temptress took one look at Dan, fell madly in love, and, by all appearances, it was mutual.

For the rest of our stay, Thaïs never left Dan’s side, either sitting next to him or under the table with her head on his foot as he ate.  At night, she slept outside our bedroom door.

Everyone was amazed by her devotion to my husband.  My Aunt was convinced it was his irresistible, all-American charm.  She’d seen the same thing happen during the war when American GIs set more than a few French girls’ hearts aflutter.  They all seemed to have such beautiful teeth, she remembered. 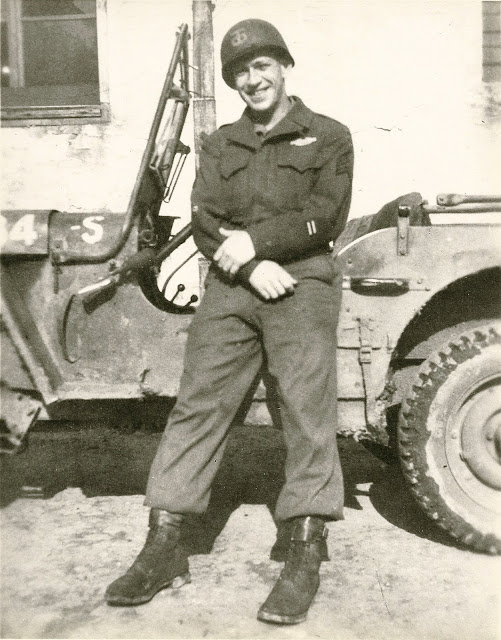 One of those American GIs was my husband’s father, Dan Sr., who once admitted that during the war he had spent more than a few nights in the company of some charmantes mesdemoiselles. 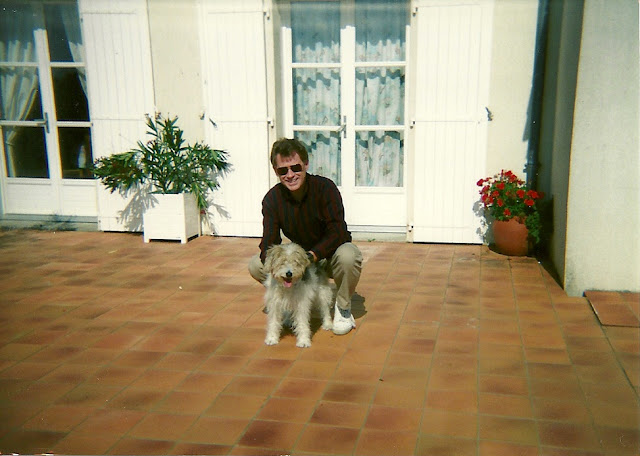 Thaïs would show the same love and devotion to my husband every time we visited.  This picture was taken about a dozen years after their initial coup de foudre.  By then, Thaïs’s hunting days were behind her, but their love affair endured the test of time.

The rest of that weekend was spent in a heady haze of laughter, good jokes, bad puns (is there any other kind?), exquisite food, champagne, hearty cidre, calvados, the best bottles of Bordeaux from my Uncle’s cave, and my husband’s initiation (instigated by my cousins) into the age-old trou normand ritual (don’t ask!).

When we returned to Paris, the forecast was for bright, sunny skies with no strikes on the horizon.   Naturally, our luck didn’t hold.   Two days before our departure, the airlines went on strike and the following day the trains went out in a show of solidarity. 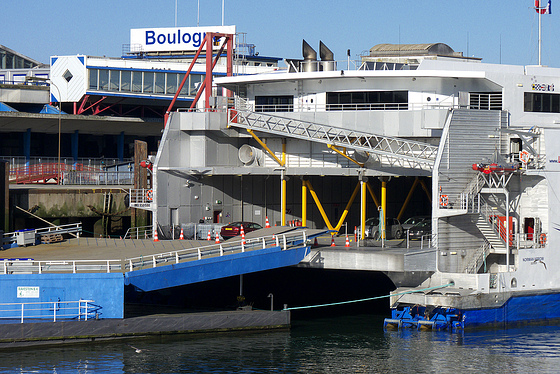 We had to rent a car, drive to Boulogne-sur-mer to take the ferry to Dover, then a bus to London and a train to Heathrow Airport, where we caught a flight back to Philadelphia.

I was exhausted, but Dan spent most of the flight back to Philadelphia planning our trip back to Paris.  There was so much he still wanted to see and do and experience that he couldn’t wait to go back.

“So, I guess, the last two days of scrambling to figure out how to get back home because a bunch of overpaid, underworked Frenchmen would rather go on strike than do their jobs didn’t bother you?”

In response, my husband gave me a picture-perfect haussement des épaules (shoulder shrug).  No French bureaucrat could have done it better.

“Where did you learn to do that?” I asked in surprise.

“I don’t know, I guess I must have picked it up somewhere.”

How do you like that?  I took an all-American boy to France and came back with a Frenchman.

Ton ton Marcel has passed away.  Tante Jeanette is now living in a retirement home near her sons in the Vendée region.  The big stone house with the château at the end of the street belongs to someone else now, but the memories made around that dining room table belong to me.

Posted by Marie-Thérèse at 3:49 PM