A Birthday, Derby Day and Something That Didn’t Work Out but Did

Got my husband off on his golf trip yesterday morning (phew!).  We weren’t sure if he would make it (will fill you in on that later), but he did.  What a relief!

Of course, it’s a good thing he checked his golf bag before he left or he would have discovered a furry white stowaway when he arrived, which could have been “cat”astrophic given the careless way airline companies have been handling pets these days; but I digress.

Anyway, I finally have time to sit down and catch you all up on a few things – a birthday, Derby Day and something that didn’t work out but did.  Does that make sense? 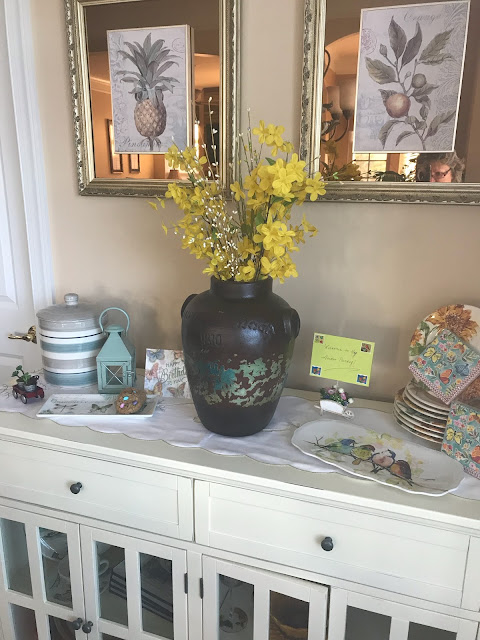 Our Birthday Group celebrated another birthday in April.  This time it was Linda’s.  The weather had been so nasty that we were really looking forward to spring.  And since Linda has a beautiful garden, it seemed only natural that the theme of the birthday party should be “A Garden Party.”  If you look closely you will see my handwritten green note (in my quirky handwriting) saying “Welcome to my Garden Party.”  Pier 1 Imports had the most delightful selection of spring/summer garden decorations, and I give them full credit for the seasonal inspiration. 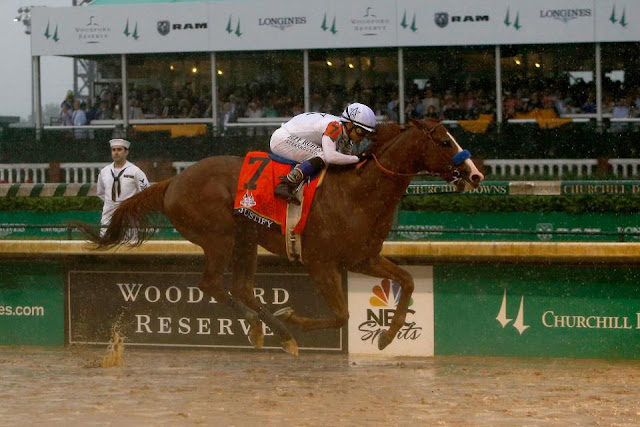 The 144th Run for the Roses at Churchill Downs in Louisville, Kentucky, saw winning horse Justify crossing the finishing line on a wet and sloppy track.  While we did not make it to Kentucky for the event, we had a fabulous time at Tavistock Country Club’s annual Derby Day Fête, complete with Mint Juleps, Derby Coolers, a Dixie Land Band and ladies in extravagant hats. 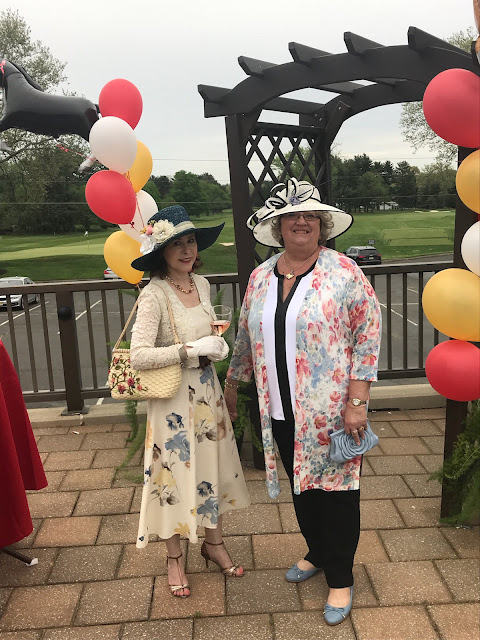 Here I am (on the left) with Birthday Girl Linda.  You will notice I am holding a glass of rosé, as I am not a fan of Bourbon, the main ingredient in Mint Juleps and the Derby Cooler.  My entire outfit was put together with some of my favorite pieces that I have been mixing and matching for years.  You may recognize the dress from our trip to Bayreuth last year. 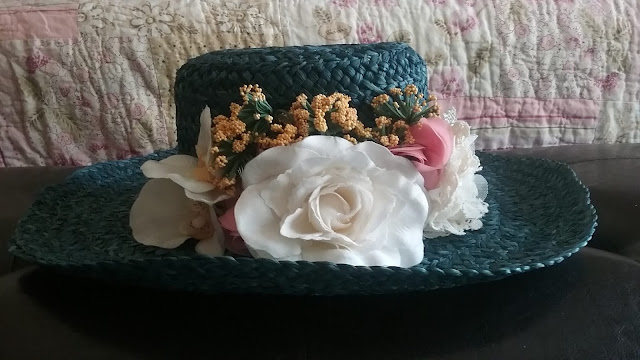 This blue straw hat that I’ve had for more than 25 years started out perfectly plain until I ransacked the house grabbing things from my dresser drawers and snipping bits of dried flower arrangements. 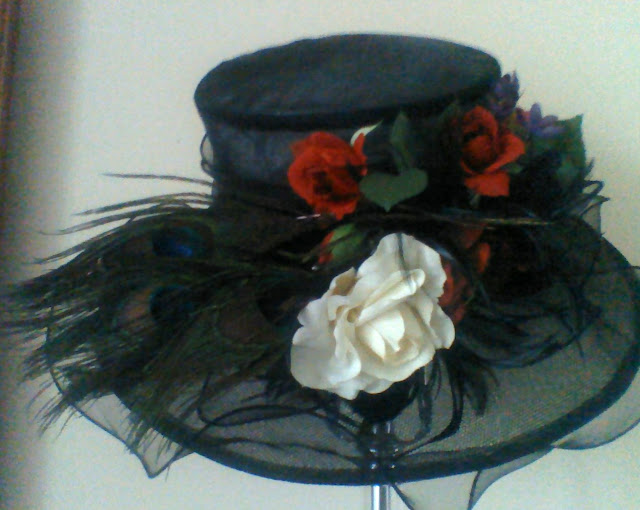 I did not win the hat contest this year, as I had five years ago with this dramatic black hat I had decorated with feathers, flowers and pins, but I was very pleased with the results and got lots of compliments on my ensemble. 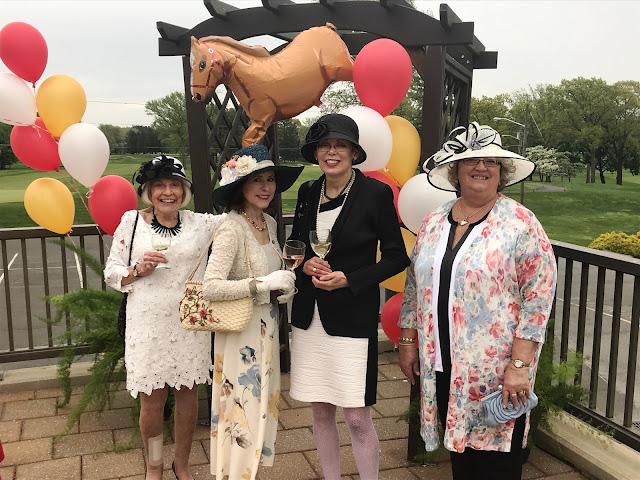 To my left is Anna, my elegant Hungarian friend.  Anna is part of a group of friends I call the Culture Vultures.  We go anywhere and everywhere for operas, musical events, lectures, art exhibits, etc.  To my right is Anna’s friend Sally, whom I’ve been dying to meet for some time. 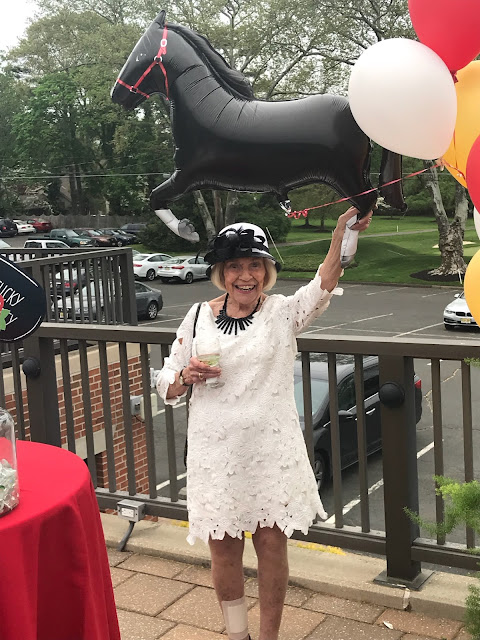 Sally is one amazing lady!  While still in college, she was bitten by the travel bug, which in Sally’s case resulted in an incurable disease. She spent ten years as an overseas Flight Attendant (called Stewardesses in those days) for Pan Am based out of Miami and New York.  When her husband was transferred to Philadelphia, she opened her own Travel Agency, Travel Anywhere, at 111 South Independence Mall East in Philadelphia.

At an age when most people are slowing down and thinking about moving to retirement communities, Sally is NOT slowing down and is moving all over the world as she arranges tours for her clients and takes groups on guided tours giving them the benefit of her 50 plus years of travel expertise as she introduces them to some of her favorite spots.  Along the way, Sally found time to have five children who have given her 15 grandchildren all of whom find it difficult to keep up with this diminutive dynamo.

As Sally puts it, “HERE I AM…50 years later…living travel, loving travel and enjoying a lovely, lively life.”  And so she does!!!  And, boy, does she have some fabulous stories!!

The following weekend we were to be in New York.  Dan’s birthday was actually in late April, but he wanted to celebrate in New York, so I made dinner reservations in The Bar Room at the Modern, the restaurant attached to the Metropolitan Museum of Art.

The next day we were scheduled to see Roméo et Juliette (by Gounod) at the Metropolitan Opera.  It would be our last opera of the Season and we were looking forward to going out on a high note.  It didn’t quite work out as planned.

On Thursday morning, the day before we were to leave, Dan woke up with a violent attack of Vertigo.  This was not the first time he’s been through this, but it was by far the worst episode to date.  I won’t go into the unpleasant details, but by that night he was still unable to raise his head without getting dizzy and having to bolt to the bathroom.

By 10:30 that night I knew that New York was not in the cards for us, so I called my friend Earline.  Earline is one busy lady with an active immediate family and a huge extended family.  There are, to say the least, lots of comings and goings in her life on a daily basis.  In addition, her husband, Bill, is a Pediatric Cardiologist who, when he’s not seeing patients, is either on call or involved in consultations.  Clearly it was a last minute long shot, but the thought of those tickets going to waste would have made a bad situation even worse.

Could they use the tickets?  “Oh, and one more thing,” I said, “if you can make it to New York tomorrow, Friday, you can use our room at The Manhattan Club.  It’s already reserved and paid for and if we don’t use it, it will go to waste.”  (I hate it when things do that!)  I knew this was REALLY a long shot, even longer than the horse I bet on in the Derby that came in dead last.  I think he’s still running!

There was silence for a moment or two and then Earline said, “I’ll call Bill at the office and get back to you.”  A few minutes later she called.  Yes, they could use the tickets and the room.

So, after scrambling to get things done ahead of time, Bill and Earline left the next day for an unexpected weekend in New York, the City where they had met, fallen in love, married and had their first child.  And in a beautiful twist of fate, it was also their anniversary weekend.

I guess you could say that it was something that didn’t work out for us but did for them.  Life’s funny and wonderful that way.

Posted by Marie-Thérèse at 7:07 PM