You may remember my recent visit to my highly talkative, slightly eccentric eye doctor during which we discussed his checkered dating history and current plan to “recycle” old girlfriends (See “Love Recycled -- Can You Move Forward by Going Back?”).  We did, of course, eventually get around to talking about my eyes.  The good news is that my cataracts are no worse; the bad news is that my eyesight is.  No longer will I be able to get away with drugstore cheaters.  I need honest-to-goodness prescription glasses now, just like I did when I was a child.

Of course, I only need to wear them if I want to read, which means I don’t have to wear them all the time.......for now.  At least that’s what I keep telling myself.  And, of course, my distance vision is no longer what it was.  What is?  Oh well….

As I put on my sunglasses to leave, I mention how I always hate the look of those black, dilated eyes when I leave his office.  He laughs and says, “During the Renaissance, women put drops in their eyes to get that look.  It was considered beautiful.  Haven’t you ever heard of ‘Belladonna’?”

Immediately, the little light bulb over my head went off, although I had to avoid looking directly at it with my dilated eyes, and I remembered a passage in a book on Queen Elizabeth I of England that discussed the beauty standards and rituals of the time. 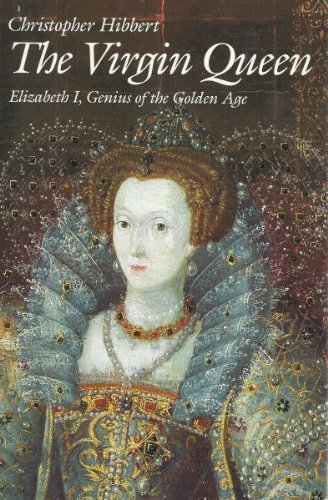 The Virgin Queen is one of my favorite biographies of one of my favorite women, and one that I reread every so often with relish.  Elizabeth II currently holds the title of the longest reigning monarch, a title previously held by Queen Victoria until her great-great-granddaughter broke her record.  Elizabeth I comes in at Number eight, but in terms of historical significance, I would definitely put her at or near the top.

﻿
﻿By today’s standards, 25 is considered young, but Princess Elizabeth had already led a tumultuous, uncertain and dangerous life from the moment her mother Queen Anne (the notorious Anne Boleyn) was beheaded when Elizabeth was just three years old.  During her half-sister Mary’s reign Elizabeth had been imprisoned in the Tower of London and never knew from one day to the next whether she would follow her mother to the scaffold.  She was, in fact, still under house arrest when news reached her of Mary’s death.  She was now the Queen of England at the age of 25.

Young as she was, by the time she became Queen, Elizabeth was already a seasoned survivor.  Not only did she have her father’s (Henry VIII) handsome Tudor looks, but she also inherited his brains, his guts and his grit, all of which she used to great effect.  Note the full title of Christopher Hibbert’s book The Virgin Queen – Elizabeth I, Genius of the Golden Age.  She was and remains not only one of History’s most fascinating women, but one of its greatest monarchs.

She never married and never lacked for suitors.

“It was said that even the Pope, Sixtus V, … had his eye on her …  ‘Just see how well she governs!’ he was said to have exclaimed, ‘She is only a woman, only a mistress of half an island, and yet she makes herself feared by Spain, by France, by the Empire, by all… Our children would have ruled the whole world.’” (Quote from The Virgin Queen, p. 80)

Now, back to the subject at hand -- Belladonna.

The ideal Renaissance beauty had white skin and fair hair with barely-there eyebrows and lashes, which they plucked out to enhance the effect.  In addition, they often lined their eyes with kohl and enlarged their pupils by adding drops of Belladonna, which effect was considered to be very striking and beautiful.

Belladonna (“beautiful lady”) comes from a plant called Deadly Nightshade because it can be poisonous.  You will find it today in creams designed to kill pain.  Your hemorrhoid medicine probably contains it, and when your eye doctor dilates your pupils, he is using a form of Belladonna called Atropine.  It works by blocking certain functions of your nervous system, such as the contraction of the pupils of your eyes.

Some of the other beauty treatments resorted to by Renaissance ladies were even more deadly, such as the various mixtures used to bleach and whiten the skin -- lead and white vinegar, mercury and turpentine, and borax and sulfur (with its accompanying odor of rotten eggs).  The damage done to their skin over time must have been horrific.

And don’t think the craze for teeth so white they glow in the dark is purely a modern obsession.  In those pre-Crest White Strips days, Renaissance ladies vigorously rubbed their teeth with various mixtures including powdered pumice-stone and bricks.

So the next time you pick up a new face cream to try, you can be pretty sure that the worst that will happen to you is a break out or mild irritation.  Count your lucky stars that beauty products have come a long way since the days of mercury and Deadly Night Shade.