A Brief History of the Humble Chemise

Lately, it seems as though I’m living in the heart of the Rain Forest.  Daily, heavy thunderstorms only add to the sauna-like humidity, while temperatures reach energy-sapping heights.

When I was a kid and the thermometer on the back porch shot past 90˚F, my British grandmother would say, “It’s hot enough to make a girl want to sit around in her shimmy.”  Sitting around in one’s shimmy was not something a well-brought-up young lady did in my grandmother’s day, no matter how hot it got.


Even in the sweltering heat of India, no concessions were made for climate, and the Victorian British Lady was expected to remain buttoned and corseted at all times – and so she did.  No lounging about in a shimmy for her.  How she stood it, I’ll never know.

Just thinking about, much less mentioning, a lady’s shimmy (undergarment) was considered a bit naughty; but, singing about it was even naughtier.  In the 1920’s, it became the subject of a wildly popular jazz tune called “I Wish I Could Shimmy Like My Sister Kate.”

The tune, in turn, gave rise to a dance craze called the Shimmy.  There are quite a few legends about the origins of “Sister Kate,” but my favorite is that it referred to the notorious madam of one of New Orleans most exclusive brothels.   Stabbed to death by her lover, Kate Townsend was given a high-class funeral as befitting her status in the community.  In any case, whoever “Sister Kate” was, she inspired a generation of cocktail-loving Flappers to shimmy into the wee hours of the morning.

By the 1950’s, the shimmy was simply referred to as a slip, a sleek body-hugging petticoat that you slipped on before slipping into your dress. 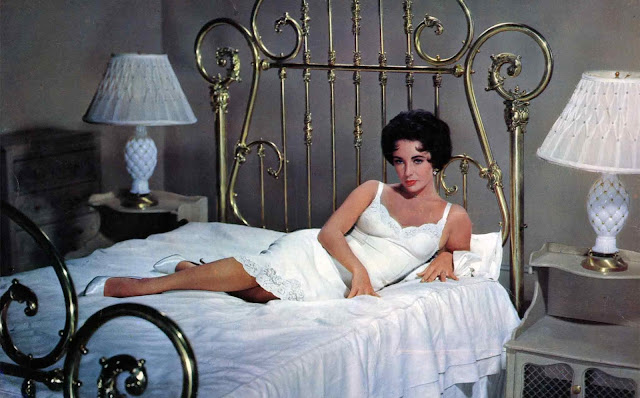 In 1958, Elizabeth Taylor (1932-2011) shocked and delighted audiences in the film adaptation of Tennessee Williams’ play, said to be his personal favorite, Cat on a Hot Tin Roof.   Taylor’s character, the sultry Maggie the Cat, spends a great deal of the film lounging around in her slip/shimmy.  In the oppressive heat of the Mississippi Delta, where the play is set, can you blame her, particularly if you look like THAT in a slip? 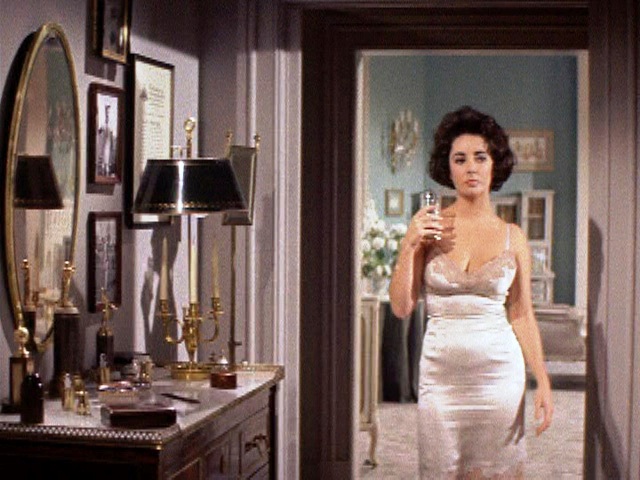 So, the slip came from the shimmy, but where did the shimmy come from?

The shimmy came from the French word chemise, which now refers to an outer garment, the shirt, but once referred to an under garment worn by both men and women.

In this portrait of François I (1494-1547), King of France, what looks like white trim on the neck of his garment is actually a full-length chemise worn underneath.  The chemise, made of washable material, such as muslin, protected the elaborate outer garments, which could not be washed, by absorbing body oils and odors.  In looking at old paintings, you often see the chemise peaking out of necklines and sleeves.  In fact, it became something of a favorite fashion embellishment.

In 1781, Madame du Barry (1743-1793), the last official mistress (Maîtresse-en-titre) of King Louis XV of France, who had died seven years earlier, posed for this portrait wearing only her muslin chemise.  It provoked a bit of a scandale, like almost everything du Barry did, but it soon became quite the fashion rage among the ladies of the Court.

The young Queen Marie Antoinette (1755-1793) may have taken a dim view of du Barry’s morals, but she clearly approved of her fashion sense.  Two years after la du Barry had herself painted in her chemise, Marie Antoinette had herself painted, by the same artist, in hers.  Overnight, court seamstresses were busy filling orders for la Chemise de la Reine (the Queen’s Chemise), a slightly more elaborate version of the one Madame du Barry had worn.

Ten years later, the two women would share more than a fashion statement.  Tragically, they would share the same fate, only two months apart, delivered by another famous Madame – Madame La Guillotine.  Madame du Barry was 49; Queen Marie Antoinette was only 38.

The Napoleonic era, with its empire waist and loose, flowing lines, finally saw women free of constricted clothing, and the chemise was an essential part of a woman’s wardrobe.  This portrait of Joséphine (1763-1814) en chemise was painted just two years before her death and three years after Napoleon divorced her for a younger woman, who could and did provide him with an heir.

Following their divorce, Joséphine went to live in her beloved Château de Malmaison in Rueil.  Malmaison is truly a magnificent place that, despite its opulence, feels like the much-loved home it was.  Mementos of her life with Napoleon are everywhere, along with an amazing collection of Joséphine’s clothes from the simple chemise to the former Empress’s most ornate court gowns.

Joséphine is buried in the nearby church of Saint Pierre-Saint Paul.  Napoleon was in exile in Elba when news reached him of her death, whereupon he shut himself up in his room for two days, refusing to see or talk to anyone.   Seven years later, on his death bed, the last word Napoleon uttered was “Joséphine.”