What’s In a Name – Maybe Much Ado About Nothing

The month of May at The Mews was rainy, alternating between a steady drizzle and torrential downpours.

But, it was hard to dampen my spirits when I looked around and saw how eagerly the flowers drank it all in.
﻿﻿

The Mews is always beautiful in the spring, but this spring has been particularly splendid.

Of course, not all of God’s creatures enjoy being out in the rain.  My neighbor, Dorothy, called to say that a little white cat had been seen wandering around the grounds for several weeks in all that torrential rain, and could I please send out an e-mail to see if anyone owned her?  (M-T Note:  I write, edit and publish a quarterly Newsletter for our little community, so I’m the contact person in such matters.)

I sent out the e-mail, but no one seemed to know who she was or who owned her and no one was willing to take her in, soooooo, you guessed it…… 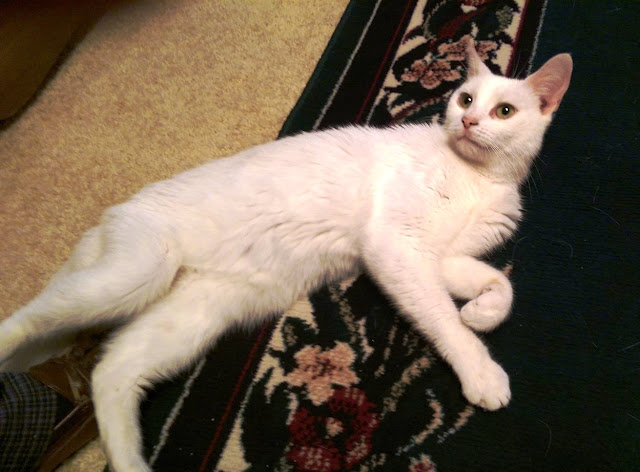 The first thing I did was schedule a trip to the Vet to make sure our new arrival was healthy.  Except for a nasty ear infection, which we’re still working on, she was.  The appointment was booked in the name of “Baby Norris.”  Obviously, we had to come up with a name a.s.a.p, but I’ve always felt that naming a new cat is a sacred obligation -- not to be taken lightly.  You have to get it just right.

The problem is that you usually give a new cat a name before you fully get to know him/her, because you can’t just keep calling him/her “Cat” until you feel you know them well enough to christen them properly, which takes time, sometimes forever.  So, there is the risk of getting it totally wrong.

Cats don’t care whether or not they have a suitable name, since no matter what it is they won’t respond to it anyway, but it does help with the bonding process for the owner.  Humans like naming things.  It’s one of our more endearing little quirks. 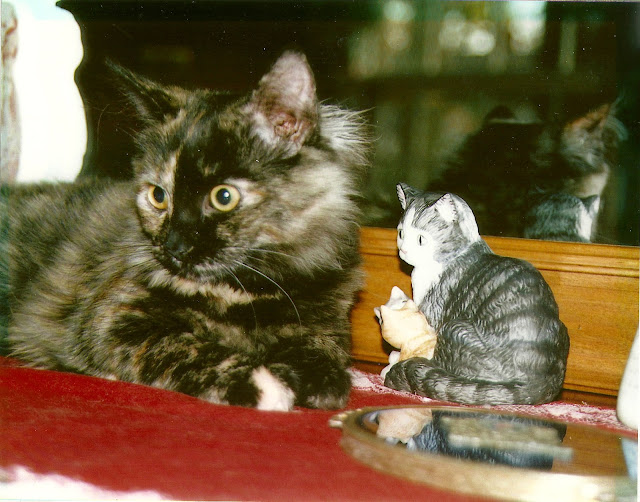 My husband named our oldest cat Cecilia (pronounced CHAY-CHEE-LIA, in the Italian manner) after one of our favorite Italian opera singers, mezzo-soprano Cecilia Bartoli.  He has a weakness for mezzos.  A friend rescued her from under a truck (the cat, not the soprano), but couldn’t keep her.  We already had four cats at the time, so I planned to give her to someone else, but the minute this tiny kitten marched, and I do mean “marched,” into our house, it was obvious that she had marched straight into our hearts and wasn’t going anywhere anytime soon.

Next month, it will be 22 years since we welcomed this little “diva” into our home, and she still calls the shots chez nous.  She is deaf now, but still in good health and can still jump onto my desk from the floor without a problem.  She, also, still lets us know in no uncertain terms what she wants – pets, food, attention -- and when she wants it --- NOW!! 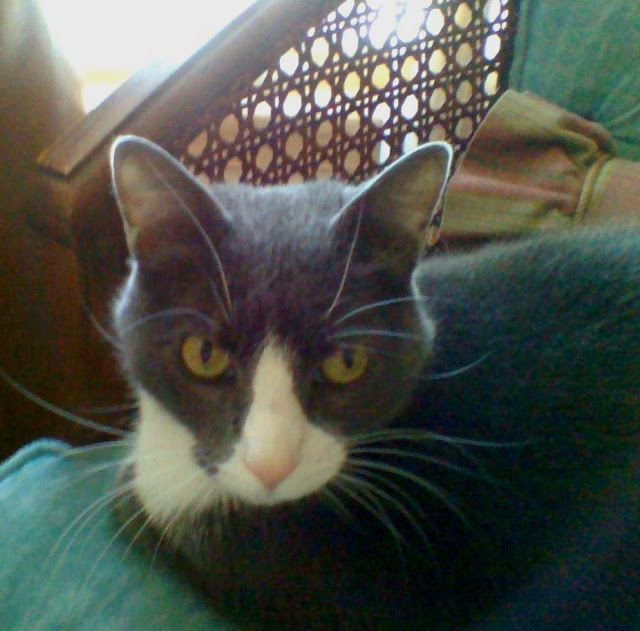 We lost our Victor several months ago to cancer at the age of 15.  He was a handsome, gray-and-white cat whom I named after the French novelist and poet, Victor Hugo, author of Les Misérables.  Our Victor definitely lived up to his French name.   He had a very sophisticated palate.   When he was just a kitten, he jumped up on the table and stole a baguette that was twice his size.

If it came out of a can, he wasn’t interested.  He did deign to eat regular cat food during the day, but he preferred his food fresh and homemade.  In the evening, he sat with us at the dinner table and ate what we ate.  His favorite dish was my chicken with orange tarragon sauce.  I always made extra sauce just for Victor. 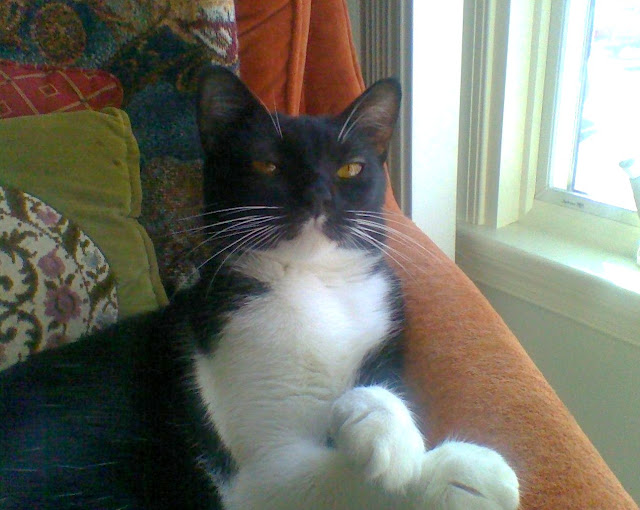 Six years ago, I named our little black-and-white kitten Allegra after Allegra Kent, an American ballet dancer whom I idolized as a young ballerina.  As it turned out, Miss Allie had more in common with the Hippos in tutus from Disney’s Fantasia (1940) than with her namesake.

At two years of age the Vet pronounced her obese, and she’s been on a strict diet ever since (See Dealing with Weighty Matters).  Even with her weight under control, Miss Allegra would never be called lithe and graceful, but a great set of white whiskers, beautiful copper-colored, Lauren Bacall eyes and an affectionate nature make her my favorite clumsy cat.

And so, the debate between my husband and me over naming Baby Norris began.  Because she is pure white, I wanted to call her Blanche, which is beautiful in French, but, as my husband pointed out, not so beautiful in English.

Then I thought about the Italian version, Bianca.  Bianca was the shrewish Katherina’s sweet younger sister in Shakespeare’s “Taming of the Shrew.”

The men were all in love with beautiful Bianca, but, alas, she could not marry until her older sister married first, and with Katherina’s disposition, that seemed highly unlikely, at least until the handsome Petruchio came along and decided to tame the headstrong Katherina.

I thought Bianca was the perfect name, but my husband said that everyone would just call her Bee for short, which reminded him of Aunt Bee in the 1960’s comedy series “The Andy Griffith Show” about a widowed sheriff in a small southern town who lives with his son, Opie, and his Aunt Bee, who takes care of them both.  I had no idea my husband had issues with Aunt Bee.  I don’t think I even want to go there….

After a few more suggestions that didn’t pass muster for one reason or another, we decided to go back to the world of opera for inspiration.  I suggested Arabella, from the opera of the same name by Richard Strauss, one of my favorite opera composers.  Strauss is known for creating some of the most unforgettable female characters in the opera world and giving them some of the most glorious music to sing.  And then, the little light bulb went off, or should I say two light bulbs went off simultaneously over our two heads. 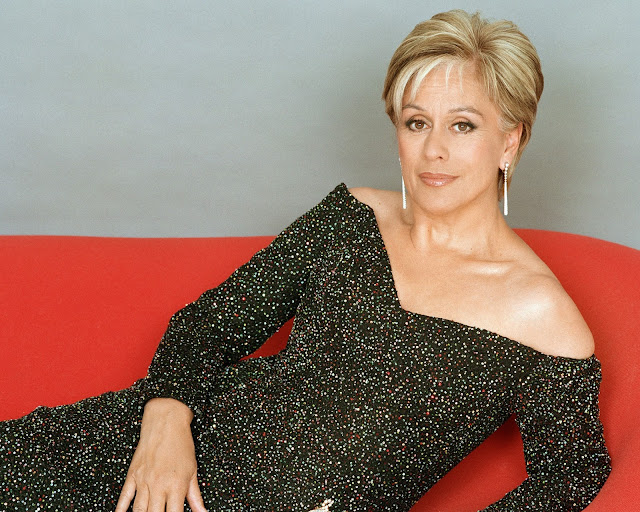 Why not name Baby Norris after one of the greatest Straussian sopranos of our generation, the beautiful New Zealand soprano Kiri Te Kanawa? 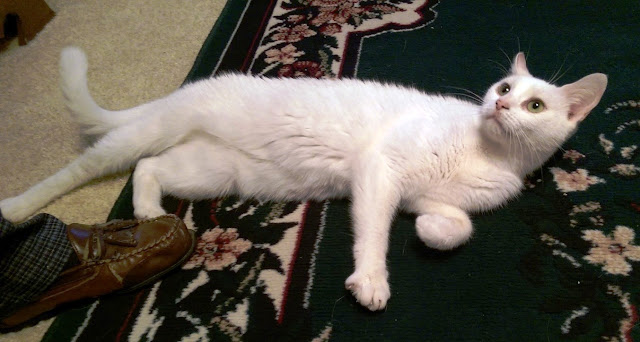 And so, Baby Norris, is now Miss Kiri Kat.  Given her namesake, she has a lot to live up to, but so far, she doesn’t seem the least bit impressed by the fact that she even has a name.  She just seems happy to be loved, well fed and looking at the rain from the inside of a warm and cozy house.