The Story of Eileen’s Wedding Dress

Most little girls dream about their wedding day and the beautiful, princess gown they will wear, and as they pack it away after the big day, they dream about the day their daughter will walk down the aisle in that dress.  For Eileen Brell both dreams came true. 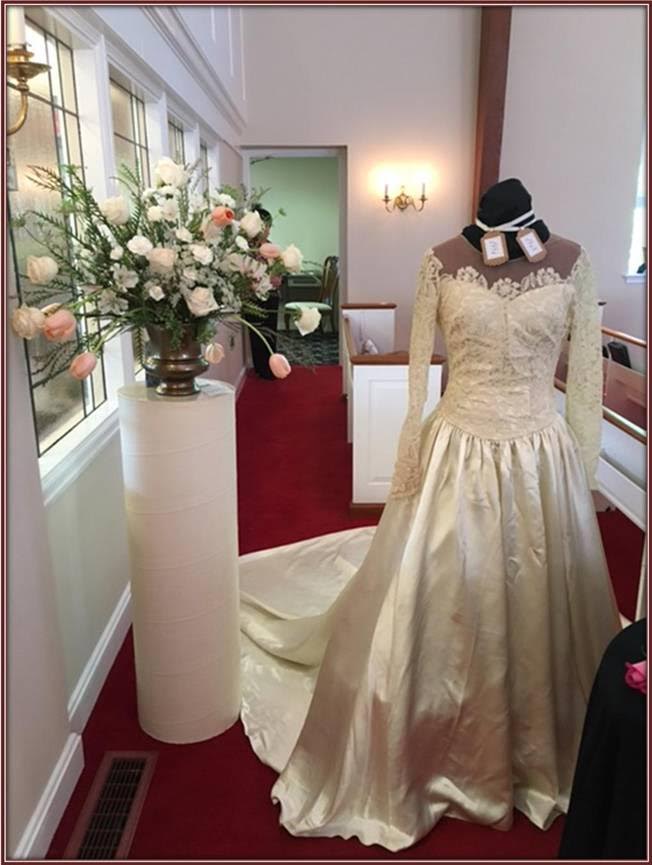 This is Eileen’s vintage wedding gown on display at a May 20th fundraiser exhibit for District XI Pennsylvania Garden Clubs.  Now, let’s go back six decades to the beginning of the story of Eileen’s wedding dress. 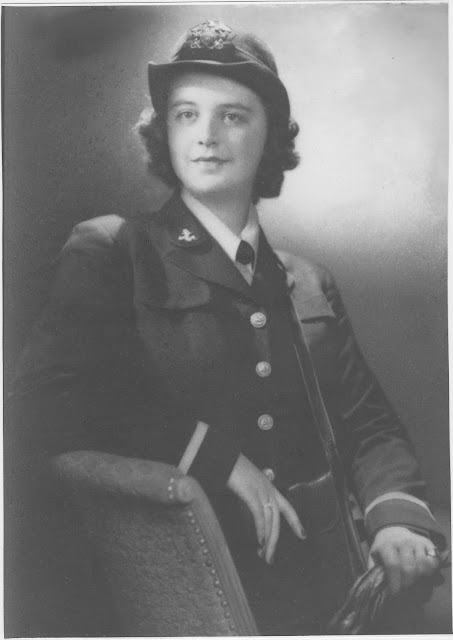 When Eileen graduated from Rosemont College in 1941, World War II was raging.  So, she felt the call, as they said in those days, “to do her bit” for the war effort.  The U.S. Navy had just formed a new branch for women, appropriately called the Waves.  Eileen was one of the first to sign up and entered the Waves as an Officer leaving with the rank of Full Lieutenant.  In addition to her duties as a Communications Expert at the Navy Depot in Mechanicsburg, Pennsylvania, she was assigned to redecorate all the officers clubs throughout the State.  She would later use that knowledge to launch her own career in interior design.  For the rest of her life, she would be very proud of her military service during a difficult but exhilarating time in her country’s history.

In 1947, Lieutenant Brell met her Romeo (literally), and soon Eileen and Romeo were planning their wedding. 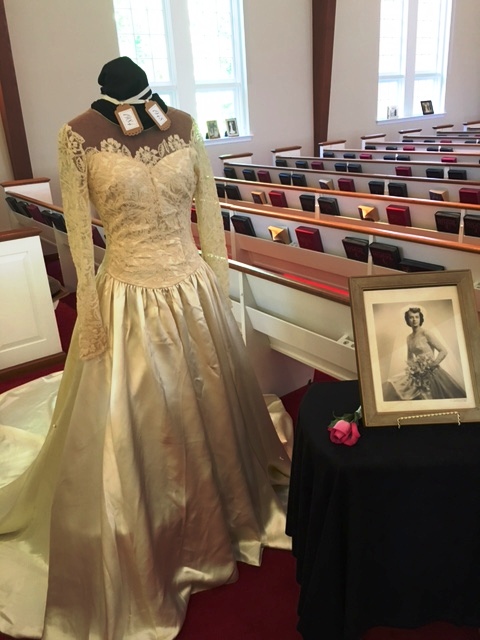 In 1948, three years after the war’s end, there were still shortages in the US, and material for wedding gowns was in very short supply, but Eileen found her dream gown in New York City -- satin and venetian lace with an illusion neckline and large, circular train.  The color was called “candlelight,” perfect for her peaches-and-cream complexion.  The satin skirt with whalebone half-skirt underneath was so heavy that finger loops sewn into the skirt were required so she could lift it.  It may have been a bit unwieldy, but daughter Ellin remembers her saying that “she felt like a southern belle” in that dress. 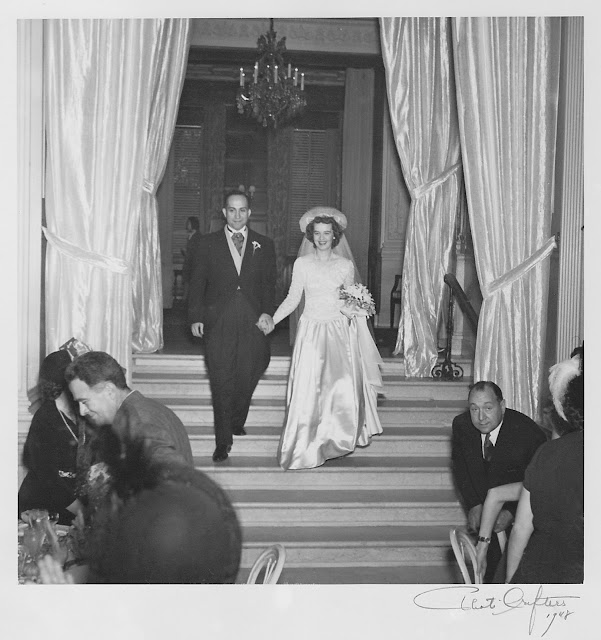 On Nov. 13, 1948, 29-year-old Eileen married her Romeo.  Here they are entering their reception at the elegant Barclay Hotel (now condominiums) on Rittenhouse Square in Philadelphia. 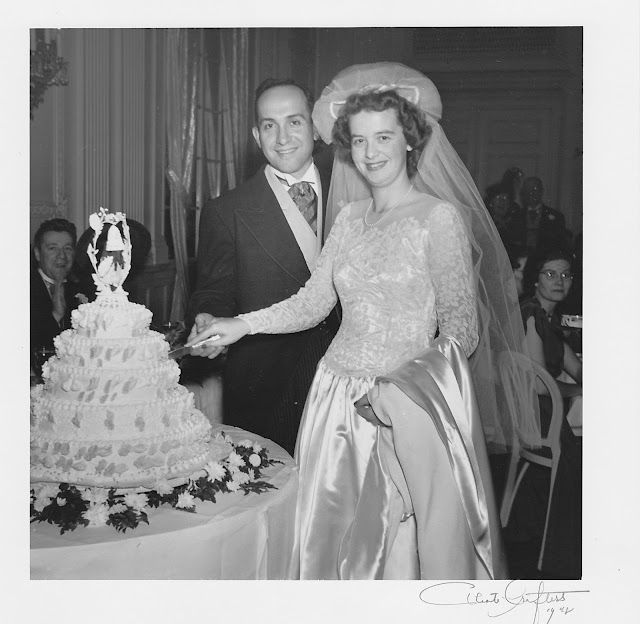 When the photographer arrived totally inebriated, Eileen and Romeo feared the worst.  But they needn’t have worried.  The pictures were all beautifully “in focus” even if the photographer was not, which only goes to show that if you are really good at what you do, you can practically do it in your sleep, or, as my British Grandmum would have said in the case of this tipsy photog, “in your cups.”

Eileen’s daughter, Ellin, followed in her footsteps and attended Rosemont College, which is where Ellin and I met in 1970.  We graduated together in 1974 and have remained friends ever since. 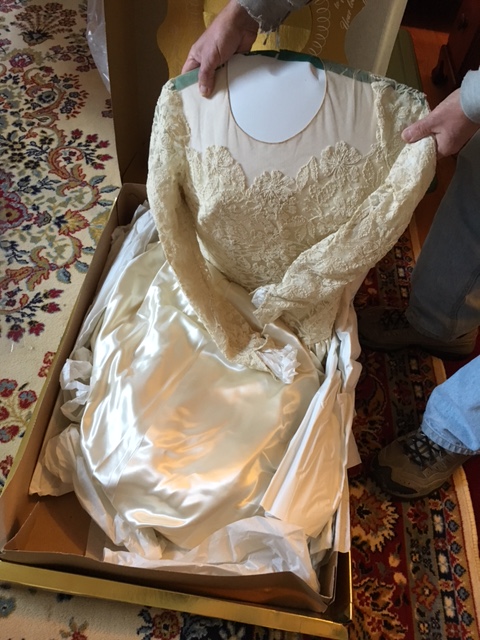 When Ellin and Jim began planning their wedding in 1984, it seemed the most natural thing in the world for Ellin to wear her mother’s wedding dress.  Needless to say, Eileen was thrilled.  And so, 36 years after Eileen had so carefully packed away her wedding ensemble, her daughter took it out of the box.  The headpiece and veil had disintegrated, but the dress was in perfect condition.  It was, however, a little too long and a bit too snug for Ellin, so it was shortened and Ellin spent the next three months “jogging her brains out to lose 10 lbs,” which she did successfully.

A new headpiece and veil had to be made, and, with Eileen’s years of experience in the interior design business, she knew just where to go for the materials.

Marmelstein’s on 4th Street in Philadelphia, known then as “Fabric Row,” was an institution for three generations until it closed its doors in 2015.  In 1919, a Polish immigrant, Abraham Marmelstein, started a needle-and-thread business from his knapsack selling door to door.  In 1937, he bought the three-story rowhouse and filled it with his family and everything a seamstress, decorator or blushing bride could possibly want to make her dreams come true.  If you couldn’t find it at Marmelstein’s, it probably didn’t exist. 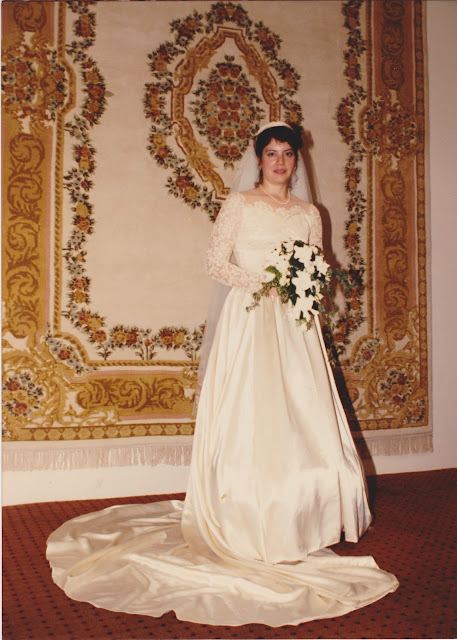 And so, on a hot and sticky June day in 1984, Ellin walked down the aisle in her mother’s beautiful, princess gown. 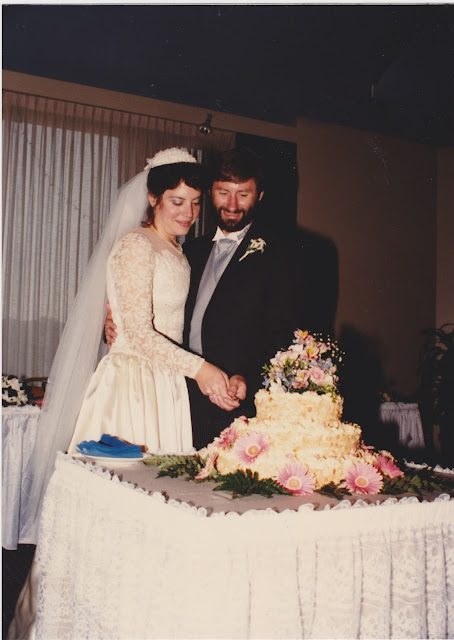 Looking back on that day, Ellin still remembers that she perspired so heavily in that satin dress, that “the dress stuck to me and I had to be pried out of it by three of my attendants.” 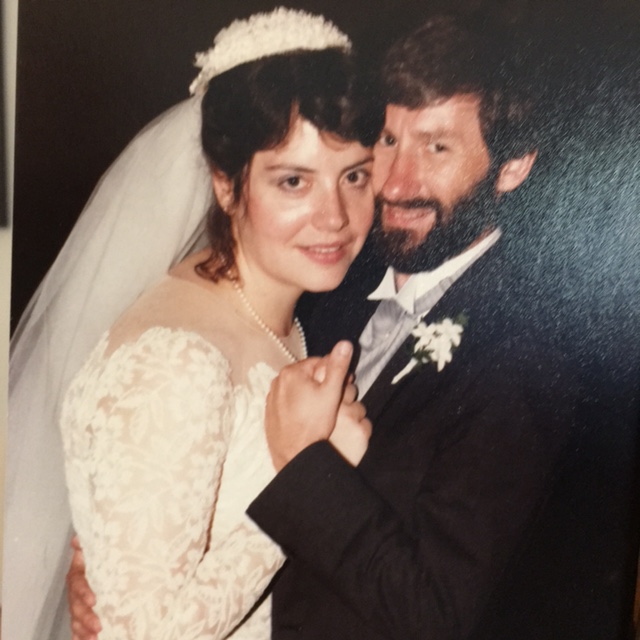 But, we all know that ladies don’t really perspire, they just glow, particularly brides on their wedding day.  And I’ve no doubt there was a special glow on Eileen’s face that day as she watched her daughter walk down the aisle in the wedding dress she had worn 36 years before.

In 2009, Eileen passed away at the age of 90.  Ellin lost her beloved mother, and we lost another cherished member of the Greatest Generation.  We will not see their like again.

After 32 years of marriage, Ellin and Jim now feel the need to downsize and simplify their lives, something I understand well.  My husband and I did just that when we moved from our large, colonial-style home to our current townhome.  A lot of decisions need to be made at such a time – what to keep, what to discard and what to give away.  It’s a difficult process, but one that forces you to focus on what is truly important in your life.

For Ellin and Jim, focusing on what is truly important in their lives has very special meaning.  For the last five years, they have been helping their 28-year-old daughter successfully battle Hodgkin’s Lymphoma. 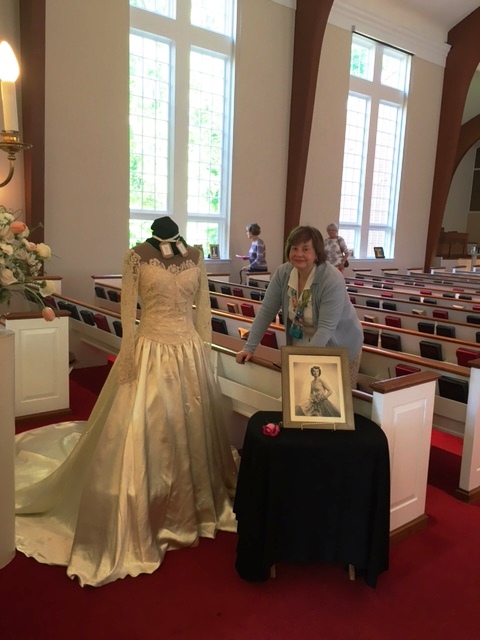 Ellin has made the difficult decision to sell her mother’s vintage wedding gown.  While the thought of parting with it is, indeed, a sad one, the thought that Eileen’s wedding dress might take another trip down the aisle is a happy one.


If you are interested in purchasing this beautiful gown (American size 8/10), in absolutely pristine condition, please contact me.

Posted by Marie-Thérèse at 2:44 PM