What Is Je ne Sais Quoi?

In my previous post, I linked to an interview I did for my hometown newspaper entitled Finding Your Je ne Sais Quoi.  The interviewer, Anne Neborak, an award-winning photojournalist, is also a former high school classmate of mine, so we had fun working together and catching up on the intervening years.

In Finding Your Je ne Sais Quoi, I talked about what I see as the difference between fashion and style and how I learned from Mme Mère the importance of the little detail that adds a certain je ne sais quoi to a classic outfit. 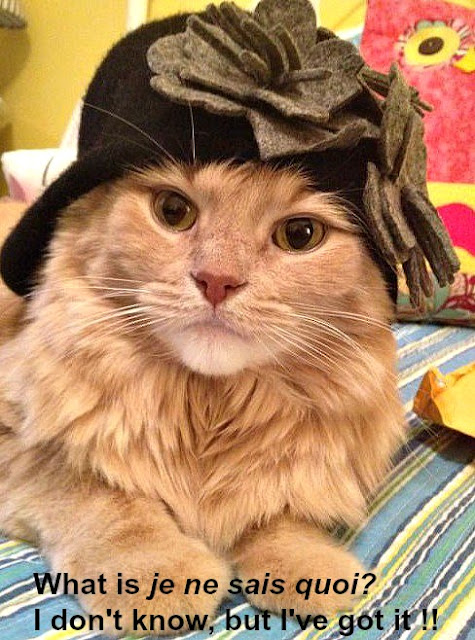 I’m happy to say that the interview generated a lot of positive feedback and some interesting questions from my readers.  Here are three of my favorites:

How do you define je ne sais quoi?

Do you have to be French to have je ne sais quoi?

Do you have to be born with je ne sais quoi or can you acquire it?

O.K., let’s start with my own, by-no-means definitive, definition of the term je ne sais quoi.

How do you define je ne sais quoi?

First of all, the words je ne sais quoi literally mean “I don’t know what,” which means “I don’t know  what it is, but it’s something special.”  In other words, it’s a quality you can’t quite put your finger on, but you know it when you see it.

The woman with je ne sais quoi simply stands out from the rest, not just because of how she dresses, but because she exudes intelligence, confidence, style and sophistication.  She need not be beautiful, or even especially pretty, but, let’s be honest, it doesn’t hurt.

I’ve known many stylish young women in my life, but the few women I have known who had that je ne sais quoi were all d’un certain âge with some patina to them.  Something to look forward to, Ladies.

In the end, je ne sais quoi may be an elusive quality not easily defined, but, like a great painting, you know it when you see it, even if you know nothing about art.   The French socialite, Juliette Récamier, whose Paris salon was renowned for its literary and political dévotés, was also renowned for her beauty, intellect and charm.  Even in a simple, white chemise, sans jewels and adornments, it’s plain to see that this ravishing young woman had je ne sais quoi to spare.

Do you have to be French to have je ne sais quoi?

In a word – non!  The French may have invented the term, but they do not have a monopoly on those to whom it applies.

To read my very personal story about Princesse Grace and how she is to thank for my one and only brush with fame, click on My Life in Hats.

Do you have to be born with je ne sais quoi or can you acquire it?

“No” and “Yes.”  But, even for those lucky enough to be born with it, it must be nurtured by the right circumstances and influences.

And when it comes to nurturing your nascent je ne sais quoi or acquiring it, here is where the French woman has an advantage over her American cousin.

The French woman is surrounded by examples and icons to influence her,

all of whom, despite differences of style, approach and appearance, share one characteristic in common – femininity.  Femininity is an essential element of je ne sais quoi.

In the glory days of Hollywood, the studios regularly turned ordinary women into ultrafeminine, glittering movie stars with oodles of je ne sais quoi.  Most did not have staying power, but those who did became role models to generations of young women hoping to develop their own je ne sais quoi.

Sadly, the silver screen no longer produces such icons.  Sadder still, the whole concept of femininity has dropped off the radar screen of the modern American woman.  Just take a look at the bar in your local restaurant and you will see well-dressed young women swilling beer from the bottle.  I confess it makes my heart sink every time I see it.


The American woman with je ne sais quoi is fast becoming an endangered species.  How long will it be before she becomes extinct?