A Very Crawley Christmas with the du Ponts – Part 3

At the end of Part 2, we left poor Lady Edith at the altar.  Sadly, we were not the first to do so.  Now, it’s time to take a look at Lady Mary’s most beautiful clothes (I've saved the best for last!) and relive one of her most beautiful moments, as we conclude our tour of the Costumes of Downton Abbey at the magnificent Winterthur Museum.


Can we ever forget Lady Mary’s fabulous spider web dress? 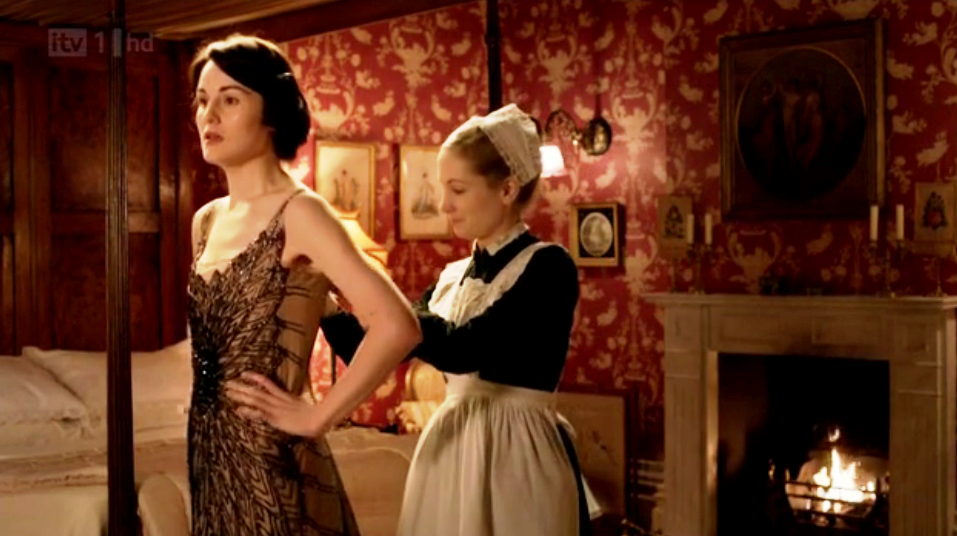 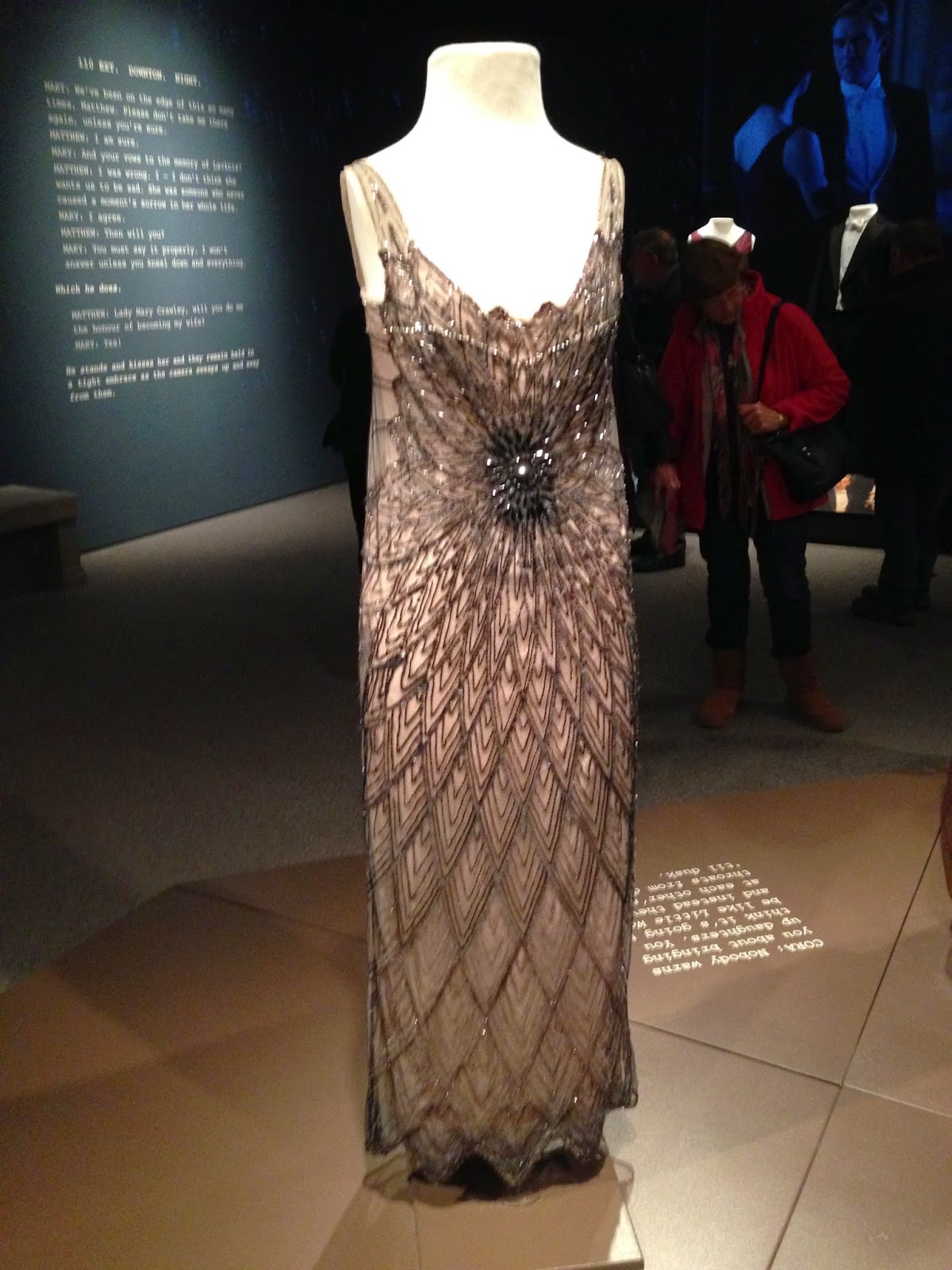 Well, here’s what it looks like up close.  Frankly, it’s even more spectacular in real life than on the screen.  Just look at the intricate beading, which sparkles like a thousand diamonds in the glow of the crystal chandelier hanging above it -- a truly brilliant way to showcase this stunner of an evening gown.  I’d be willing to bet that many a Hollywood actress of that glamorous era would gladly have gone horizontal for the thrill of wearing this gown while vertical on the silver screen.  Of all of Lady Mary’s fabulous frocks, this may just be my all-time favorite.


I do, however, have a sentimental favorite. 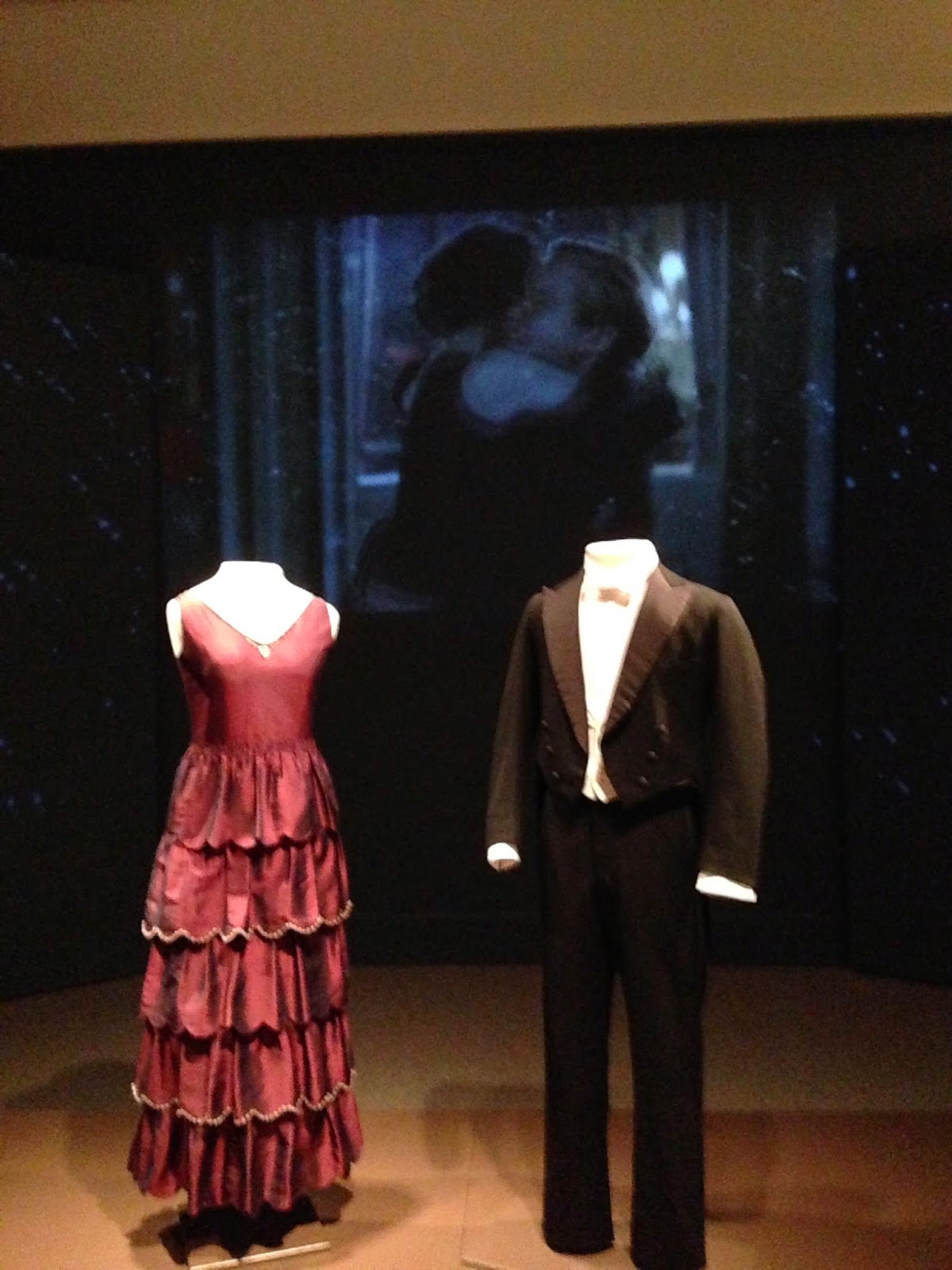 Do you remember this moment?  Matthew and Lady Mary are taking a stroll outside Downton Abbey on a lovely, starlit evening.  A light snow has just begun to fall, when Matthew drops down on one knee and pops the question we had all been waiting for, for what seemed like, forever.

The dress Lady Mary was wearing for that scene was very carefully chosen.  The color of the silk is a deep russet that appears to change from deep rose to warm brown as the light hits it.  Embellishment was kept to a minimum – along the neckline and at the edge of each tier of the skirt – so as not to steal the spotlight from that magical moment.   Of course, we knew it all along, but what a joyous relief it was to hear them finally acknowledge their love for one another.

And what a fitting place for romance.  One of the Winterthur docents told us that, since the opening of the Exhibit, she has personally witnessed five or six proposals at this very site, one of which had been elaborately prepared.  The young lady in question came for a tour with several girlfriends, and when she got to this spot, her boyfriend suddenly appeared in full evening dress à la Matthew Crawley, followed by family and friends all dressed in period clothes.  Dropping down on one knee, he proposed.  The startled young lady managed to squeak out a “yes,” before she was totally overcome by emotion.  And who says there’s no romance left in the world? 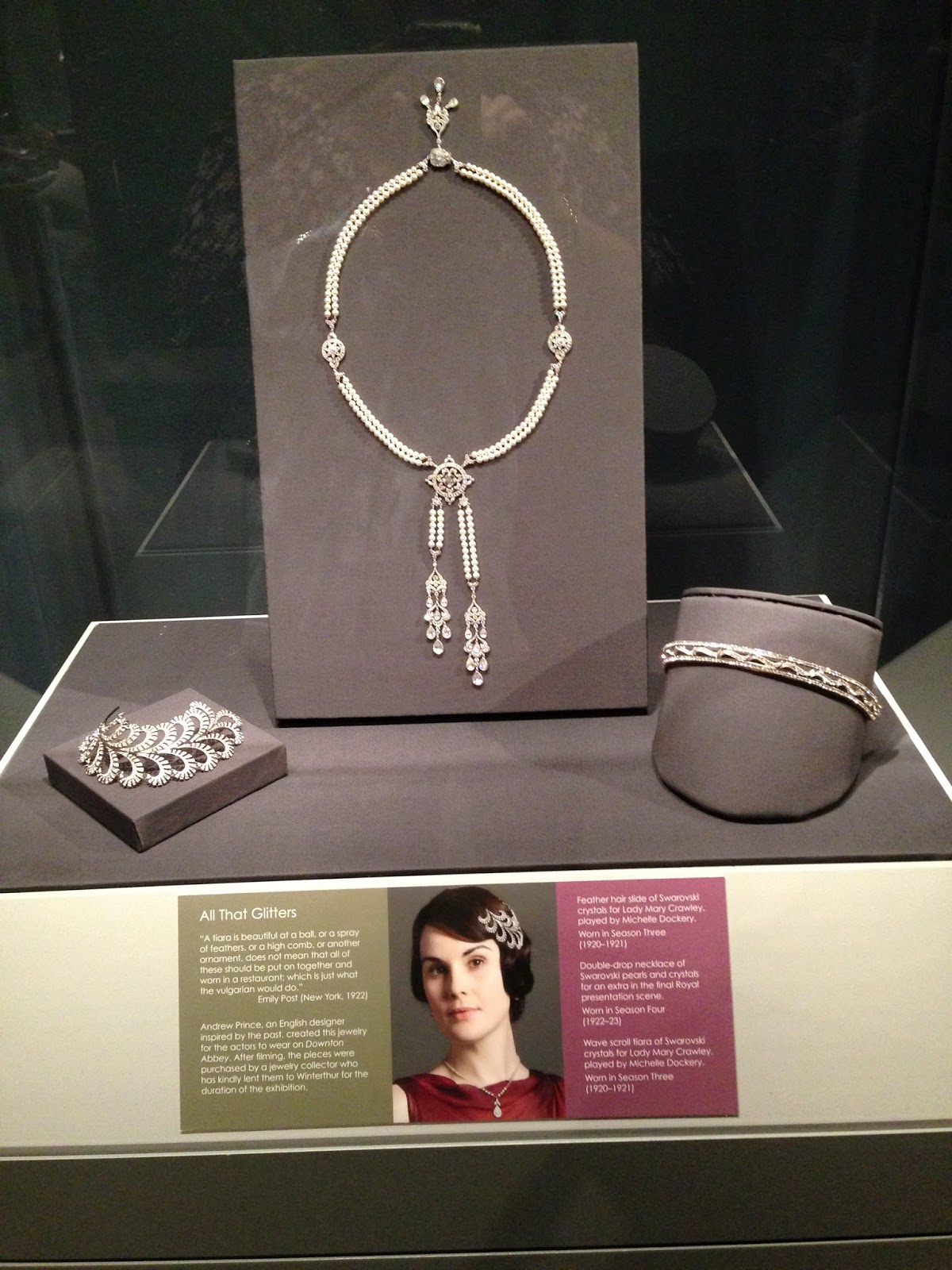 Of course, when not being proposed to, Lady Mary does adorn herself with the most marvelous jewelry.

Our tour of the fabulous Costumes of Downton Abbey at an end, we headed straight for the gift shop, where we couldn’t resist trying on some of the period hats on display. 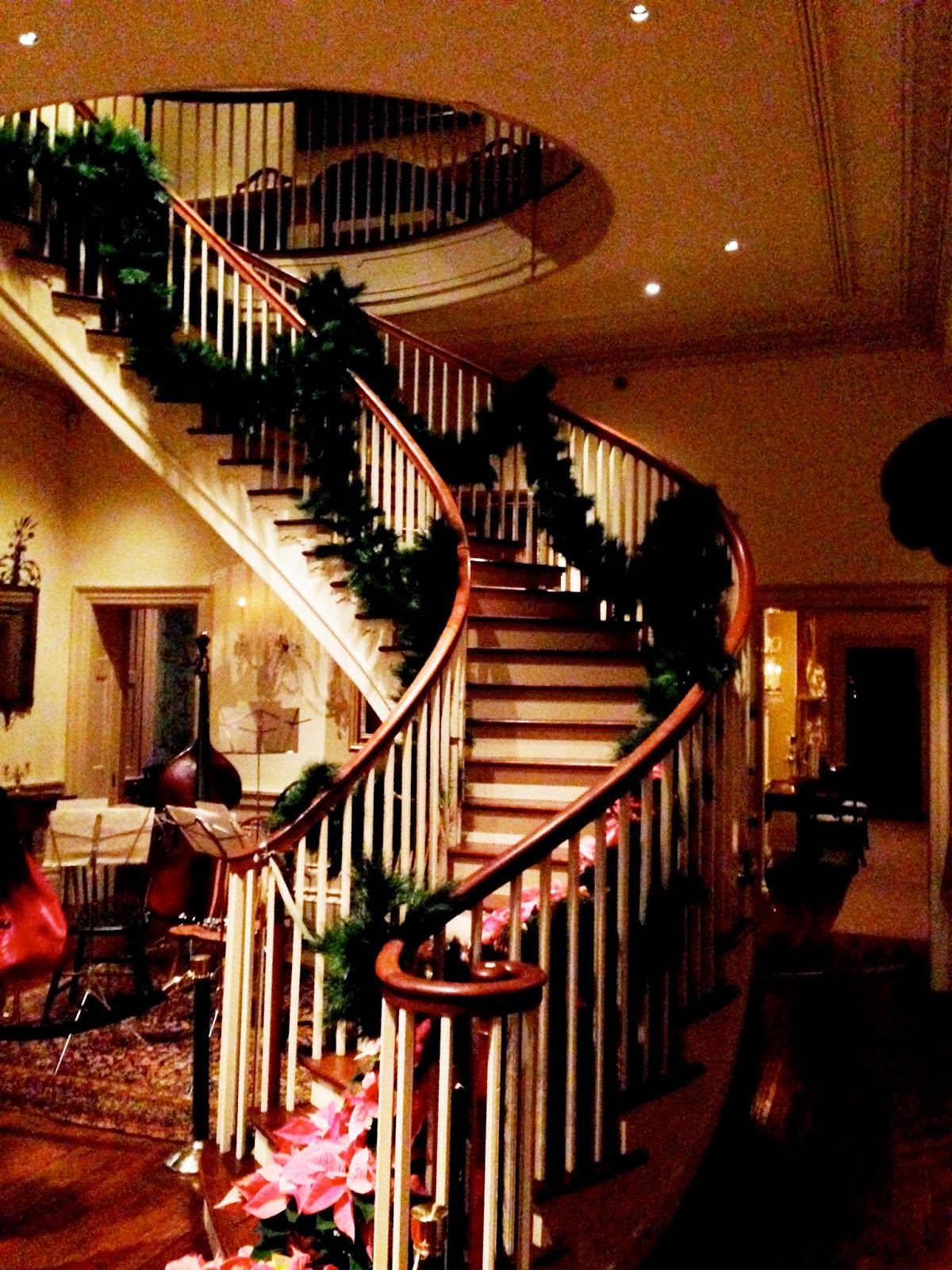 ...and return to Winterthur for the Yuletide tour. 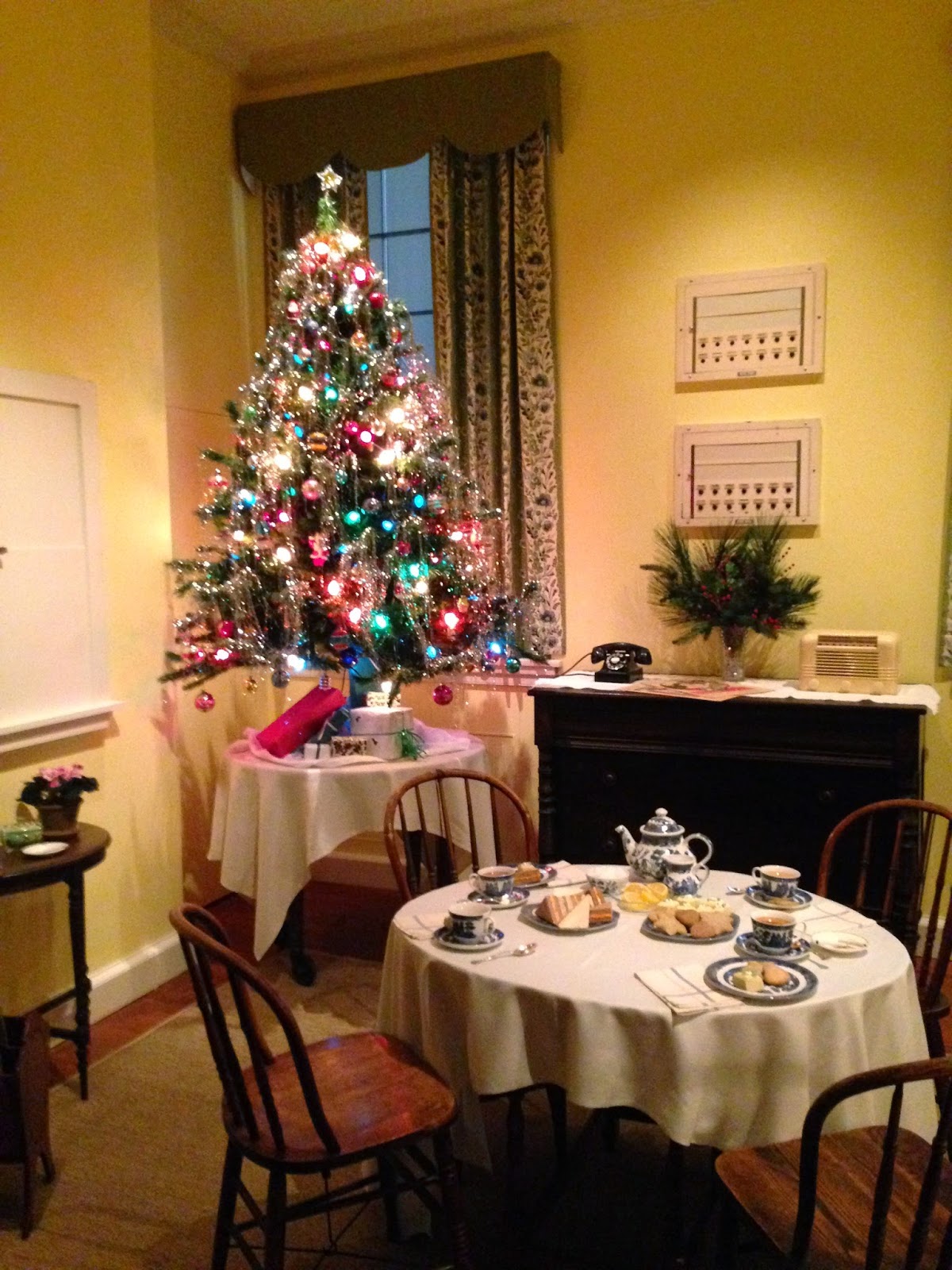 Here is where the du Ponts’ servants gathered to celebrate their Christmas.  As we go along in the tour, keep in mind that every room (and sometimes even a corner in the hall) has its own Christmas tree, each decorated in a different style.  The du Ponts, who loved entertaining and did so in lavish style, went all out at Christmas time. 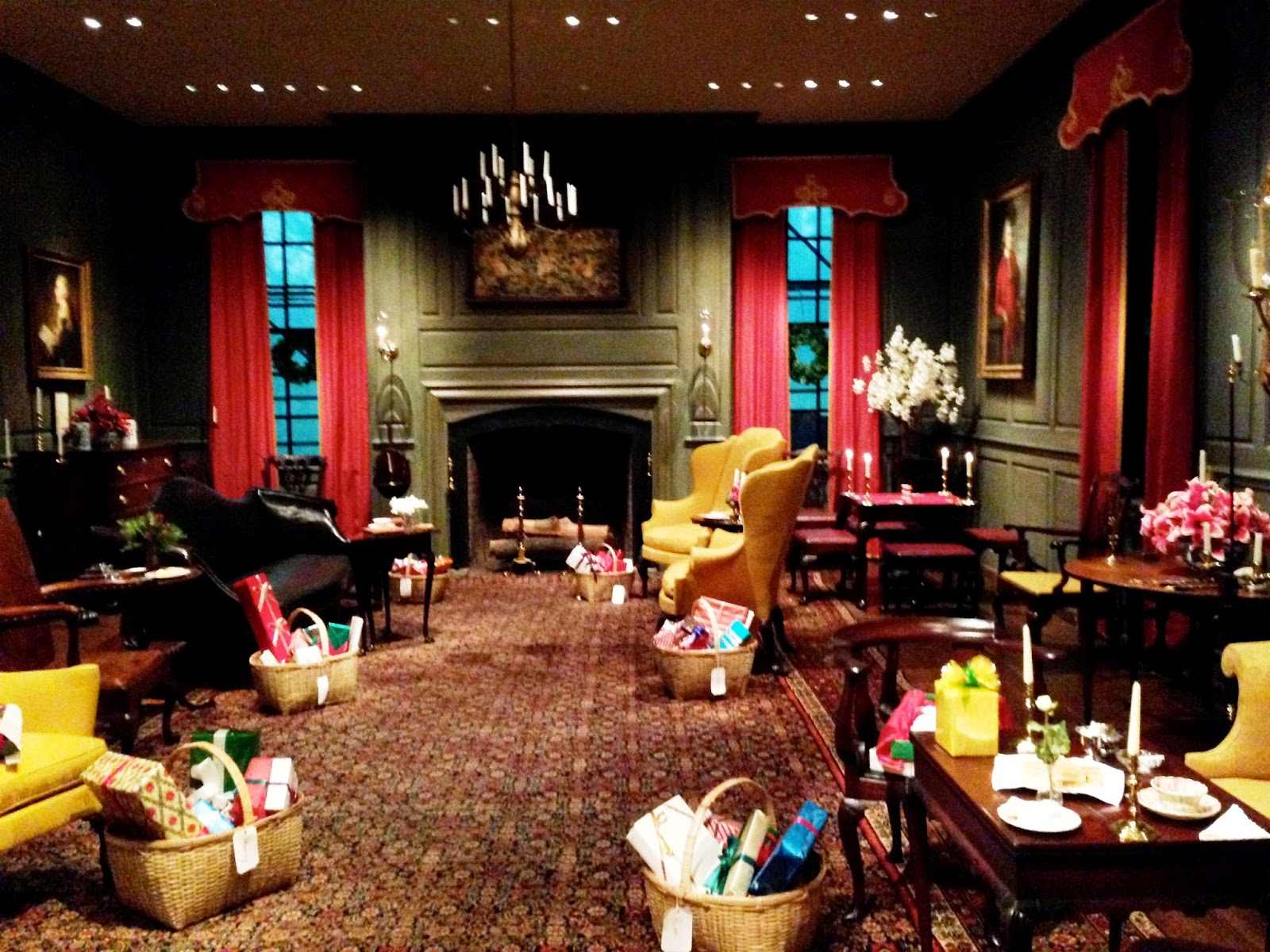 On Christmas Eve, the family would gather in this room.  Gifts were placed in wicker baskets, one for each member of the family, and labeled.  So, what would one fabulously wealthy du Pont give to another?  Believe it or not the gifts were the simple things we not-so-fabulously-wealthy mortals give to each other at Christmas time – socks, ties, mufflers and holiday sweaters. 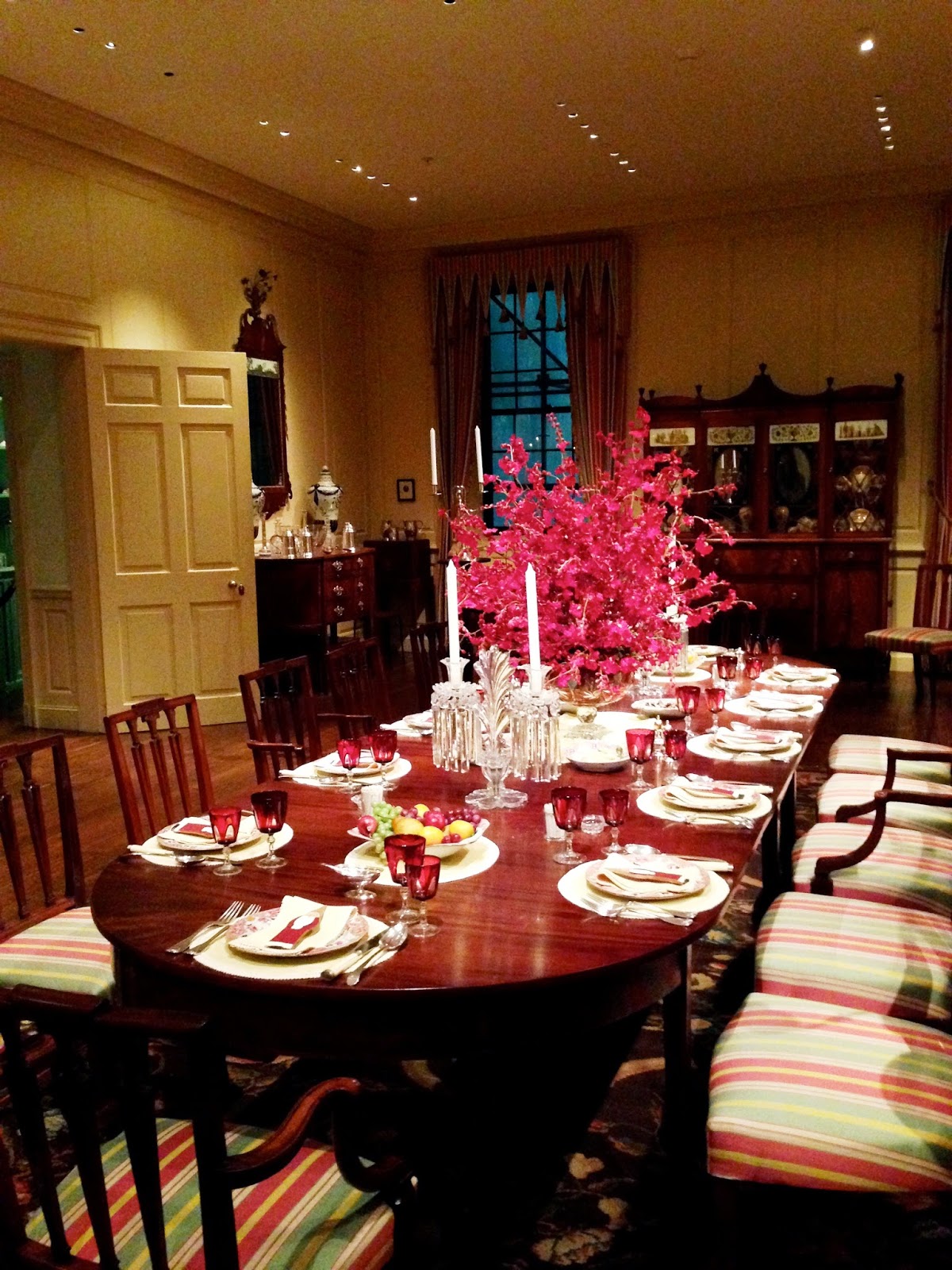 Christmas dinner in the family dining room was always a grand occasion.  It was Mr. du Pont who oversaw the table settings and chose the color scheme and centerpiece.  Mrs. du Pont saw to the comfort and needs of their guests.  It was a very equitable arrangement for this high-profile couple, each one contributing his and her own strengths and talents to create Winterthur’s unrivaled reputation for hospitality. 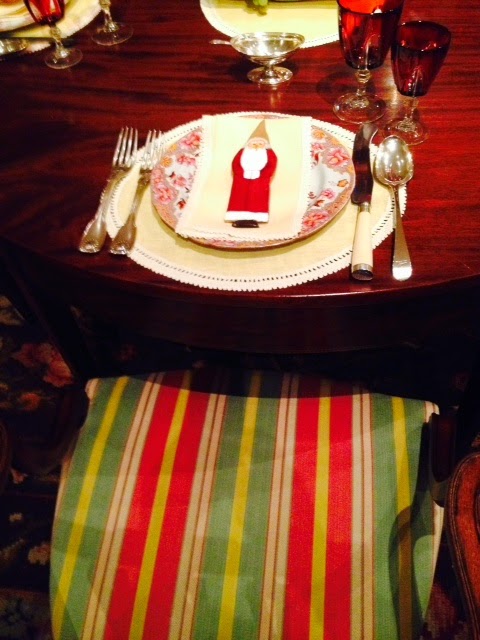 A close up of one of the place settlings shows a simple wooden Santa sitting on a folded napkin.  How perfect! 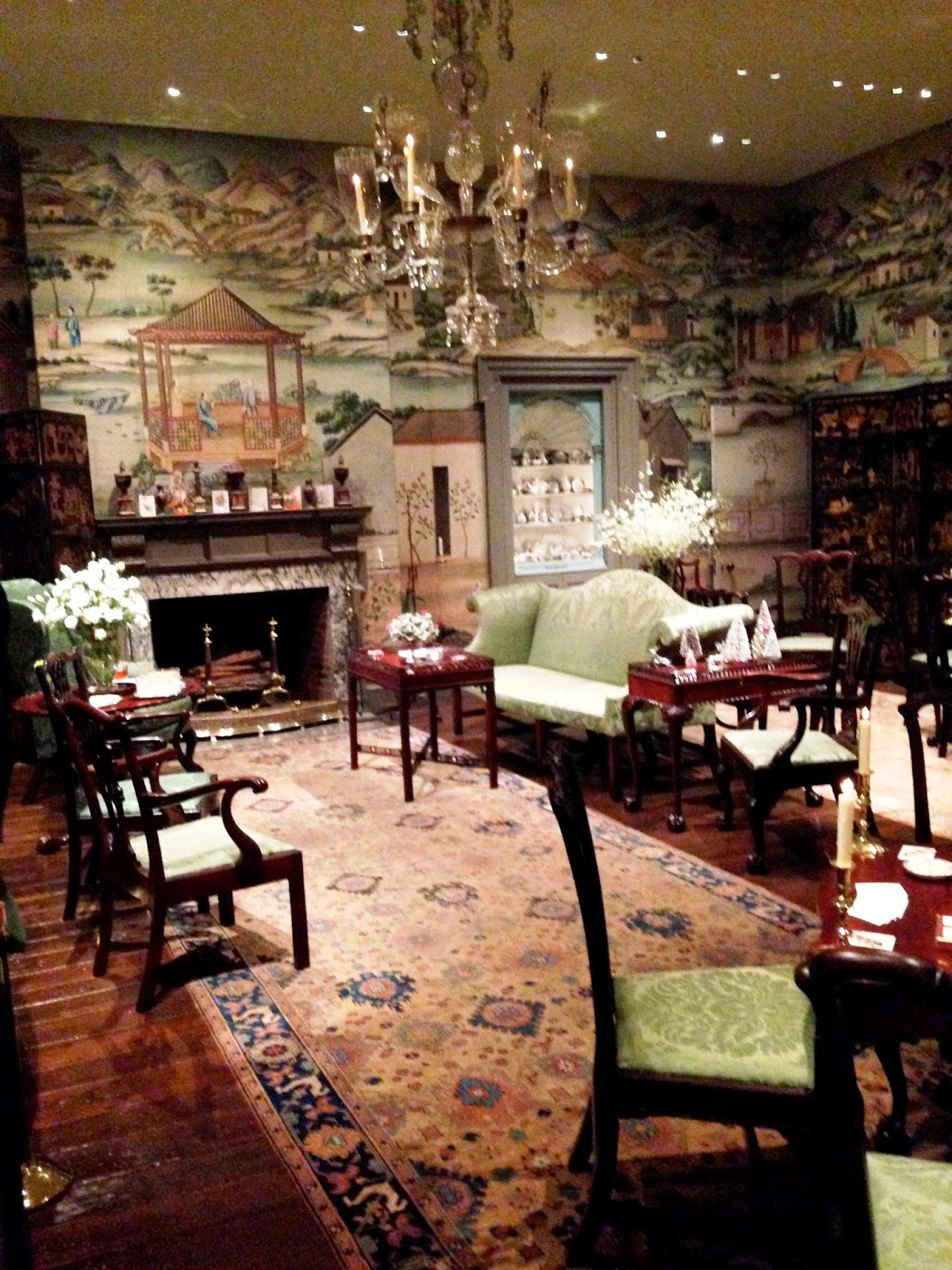 After dinner, guests would join their hosts in the Chinese room to play bridge.  The du Ponts, particularly Mrs. du Pont, were avid bridge players, and whether or not a guest was invited back to Winterthur was largely based on their card-playing ability.  Non-bridge players were rarely extended a return invitation. 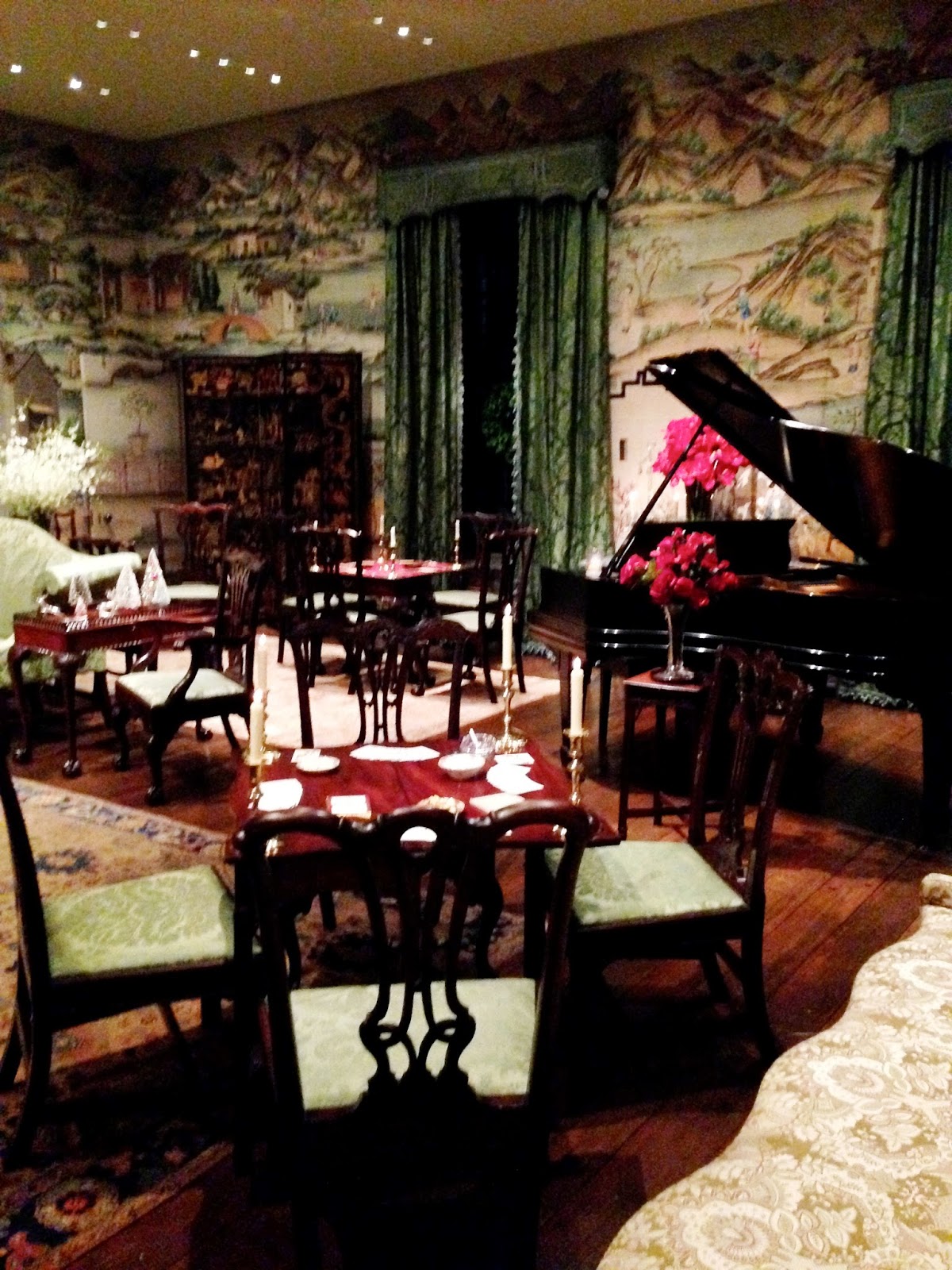 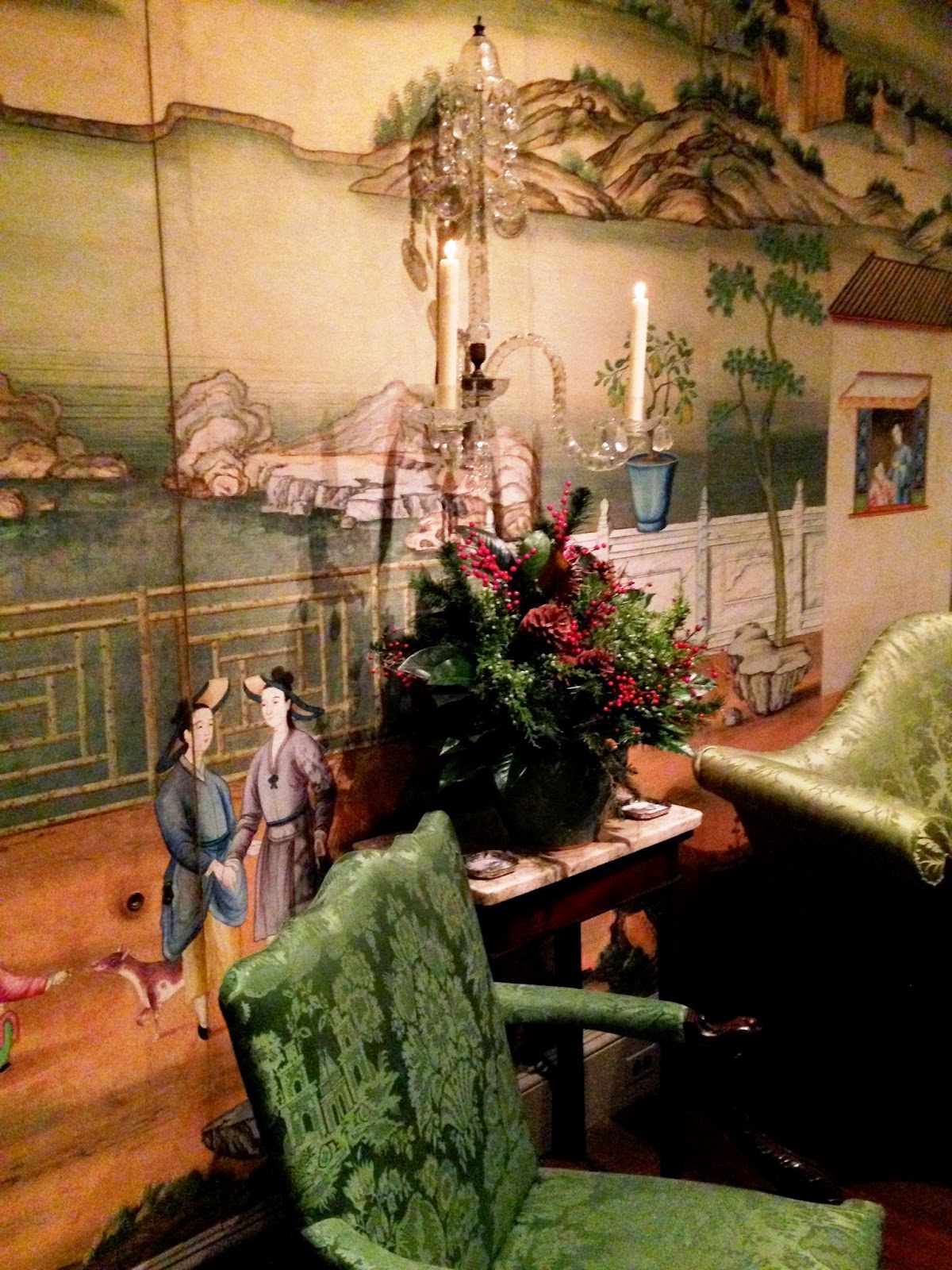 The entire room was actually decorated around the silk Chinese wallpaper, which was one long, continuous roll.  So as not to disturb the continuity of the scene depicted, Mr. du Pont had the ceilings of the room raised to accommodate the height of the paper.  It's good to be rich, n'est-ce pas?

Since I mentioned that every room in Winterthur, and almost every nook and cranny, has its own Christmas tree, here are some of my favorites. 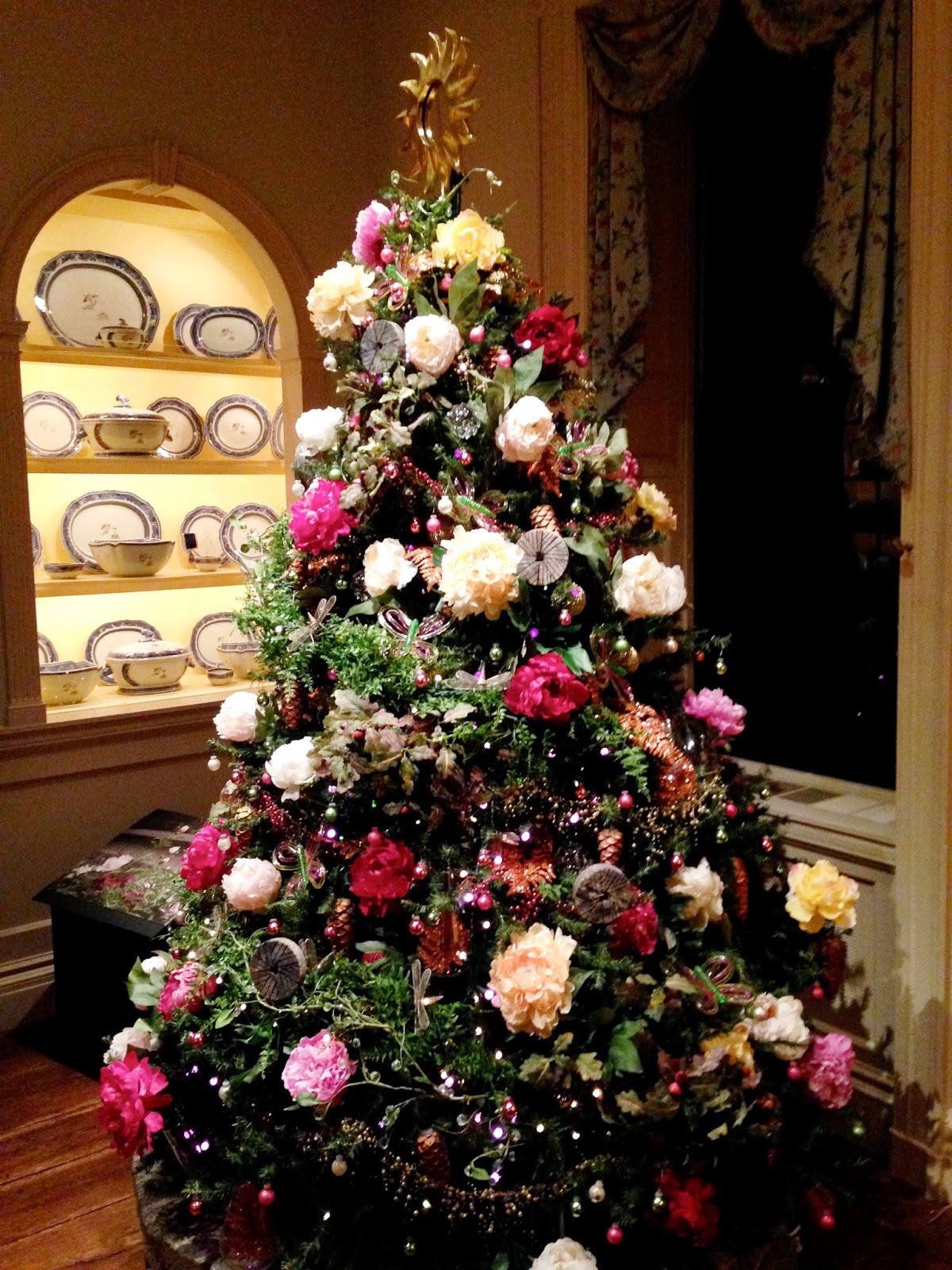 This was in the main family dining room. 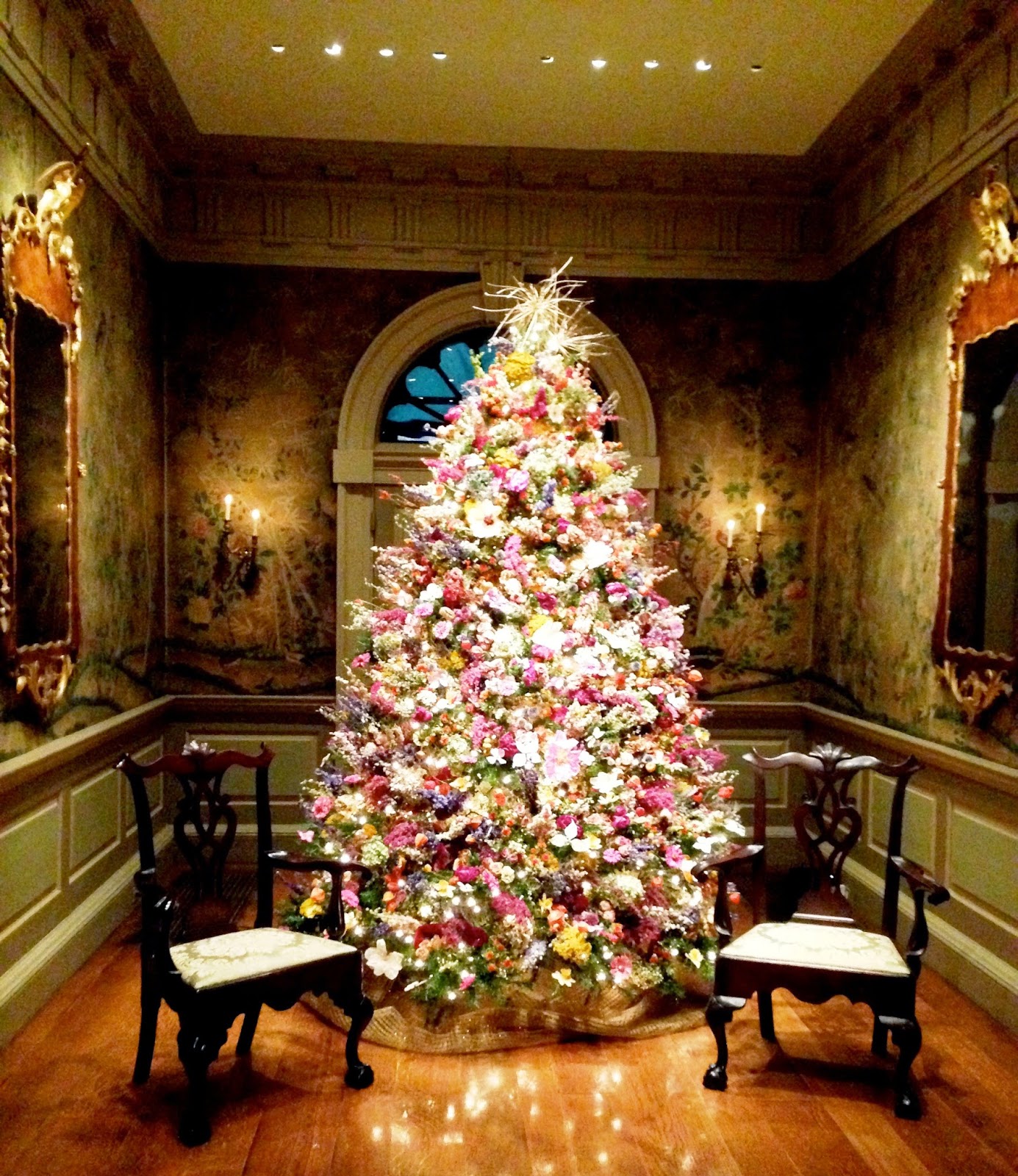 This beautiful tree, adorned with dried flower ornaments, stands all by itself in a hallway niche. 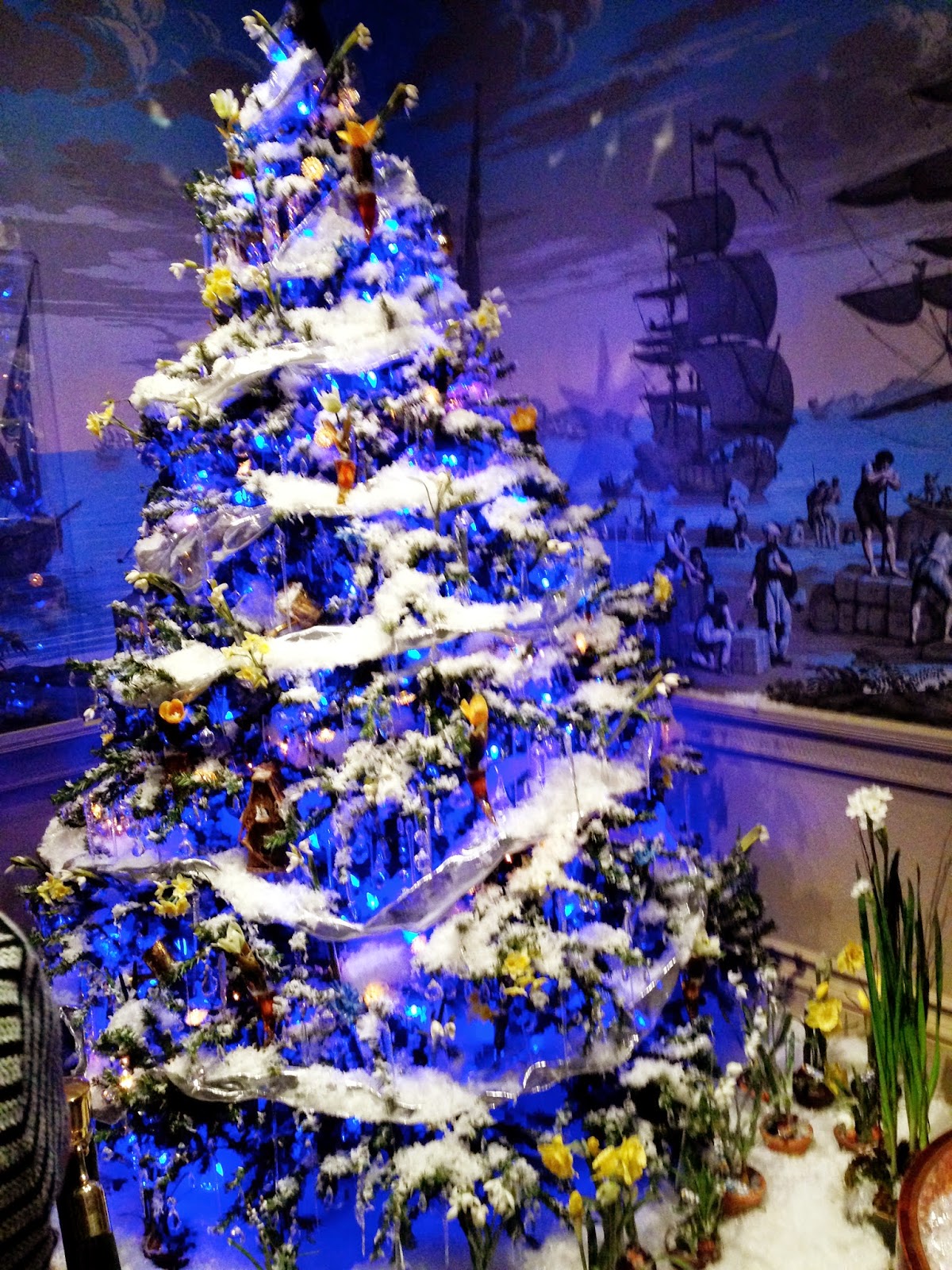 This blue and silver tree sits in a tiny corner of an adjacent hallway.  I love the elaborate wallpaper behind it. 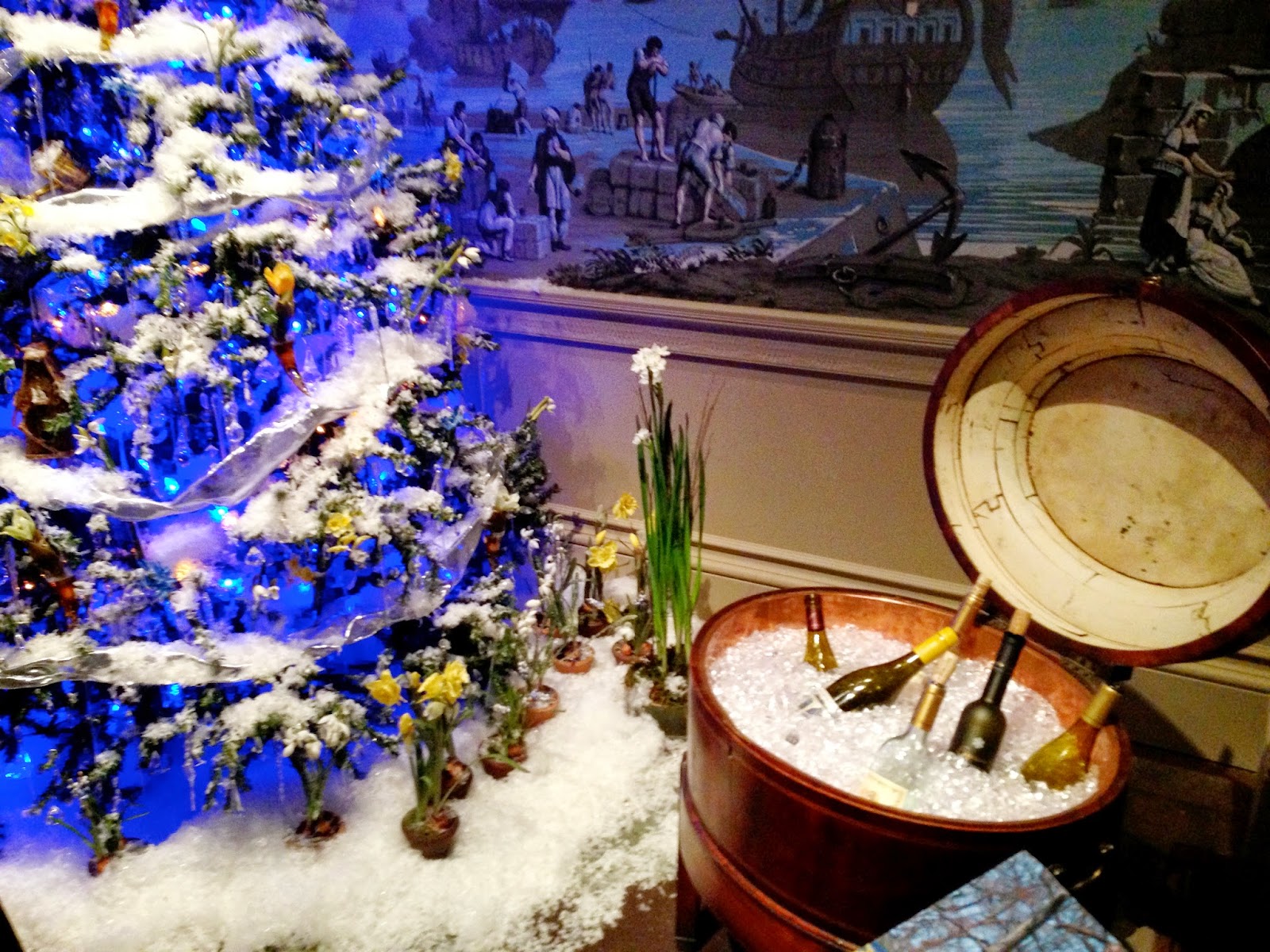 And I particularly love the copper container beside it brimming with “good cheer.” 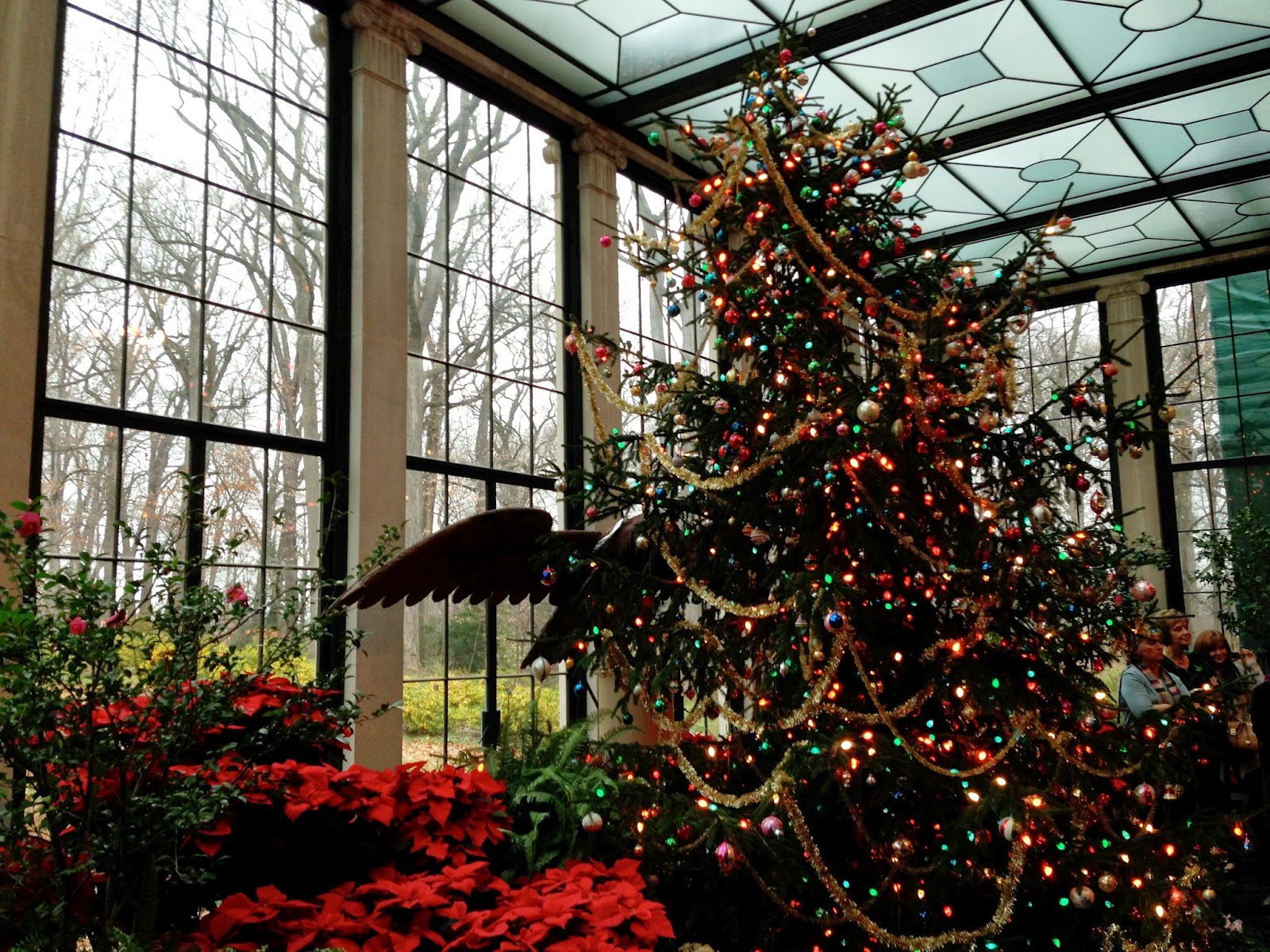 The most magnificent Christmas tree of all, however, can be found in the Conservatory surrounded by a sea of red poinsettias.  If you look closely, you can just make out a huge eagle spreading its wings.
Well, we’ve finally come to the end of our tour.  I hope you’ve enjoyed your Christmas with the Crawleys and the du Ponts at the wonderful Winterthur Museum as much as I have.
I’m eternally grateful to Cosprop, the world’s leading costumier to film, television, and theater, who lent all these magnificent Downton Abbey costumes, and to the Winterthur curators and staff who did such a fantastic job of putting the entire Exhibit together.
In addition, I would like to thank my dear friend, Earline Sanchez, for doing chauffeur duty on a cold and rainy day and for providing our essential survival kit of bottled water, trail mix and lots and lots of chocolate.
Special thanks to my dear friend, Linda Posusney, who took almost all of these wonderful photos.
And very special thanks to our superb tour guide, Addie Peyronin.  Addie is a graduate of the American Culture Winterthur Program, offered in conjunction with the University of Delaware.  Her degree is in American Material Culture (decorative arts), and her expertise and enthusiasm helped make our day at Winterthur Museum an unforgettable one.