A Very Crawley Christmas with the du Ponts – Part 1

It was a dark and stormy night………..just kidding!..........actually, it was a cold and rainy morning as we three ladies piled into Earline’s SUV to begin our journey across three States.  No sooner had we buckled our seat belts than the rain had turned to sleet.  But we were prepared for any eventuality; we had packed bottled water, trail mix and lots and lots of chocolate.

And suddenly, there it was.  The skies had cleared, and its lofty spires glinted in the sunlight before us.  We had reached our destination – Downton Abbey!! 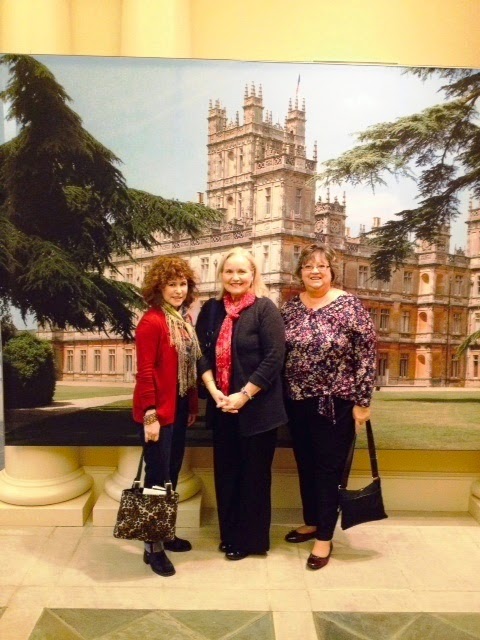 To be precise, we were in the rolling hills of northern Delaware at the magnificent Winterthur Museum, home to an unrivaled collection of American decorative arts and gardens and the palatial home of the du Pont family for more than two centuries.  Since March 1st, one wing of the museum has been devoted to a fabulous exhibition – Costumes of Downton Abbey, featuring over 40 exquisite costumes beautifully displayed with accompanying photographs, vignettes and some very apt bons mots from Oscar Wilde.

Let’s start our tour of the Abbey downstairs and work our way up. 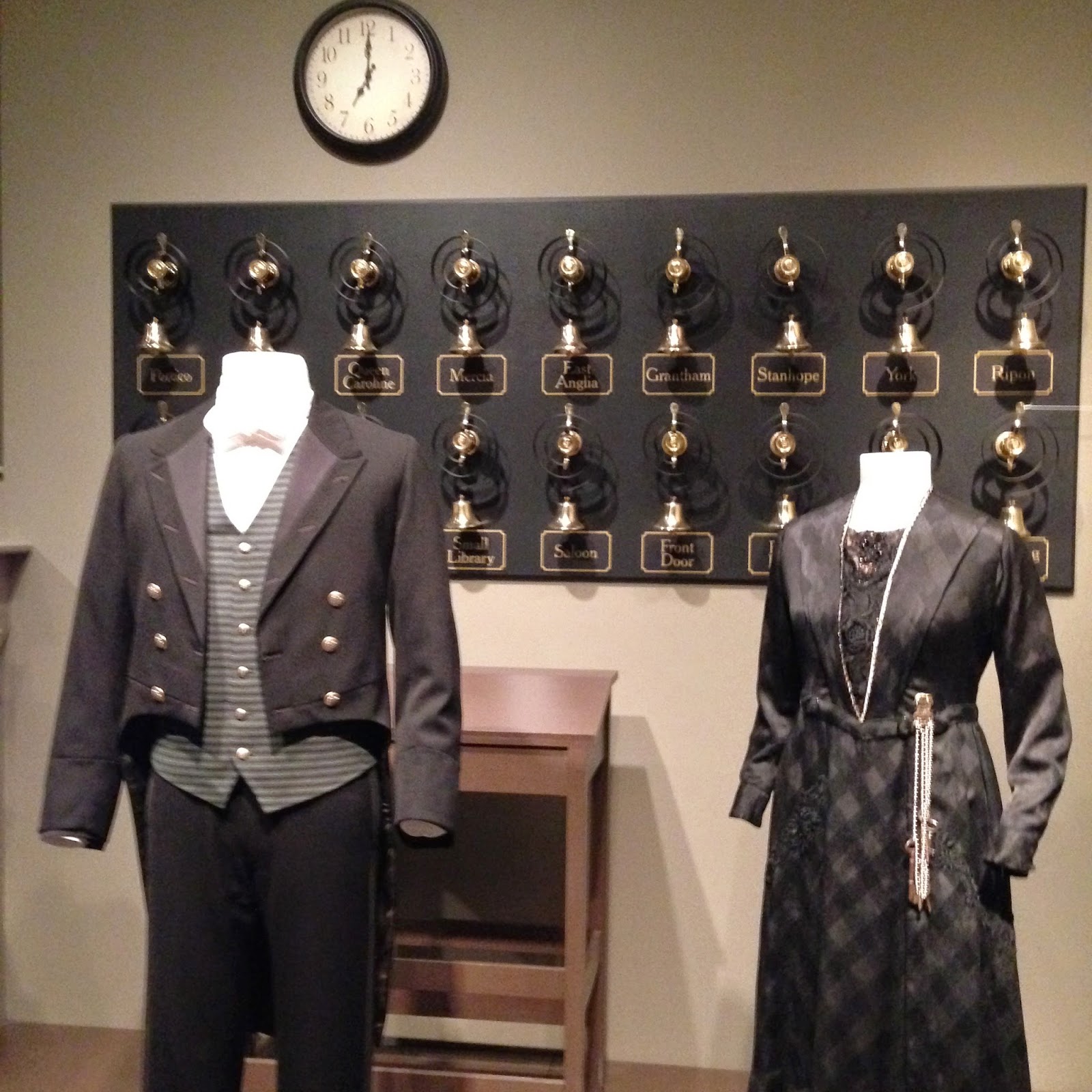 Here, in front of the board of bells used to summon the servants, we have the uniforms of Thomas and Mrs. Hughes.  Thomas, the Footman, is the man we all love to hate (Can’t wait to see what havoc he will wreak in Season 5!!.).  Mrs. Hughes, the Housekeeper, wears her keys, the symbol of her authority, on a long chain.  Do she and Carson, the Butler, have special feelings for each other???  Will they ever get together???  Perhaps next Season will reveal all….perhaps not.

At the beginning of the tour, it is noted that some of the costumes look different in color and texture “in person” than they appear on the screen.  Mrs. Hughes’ black-on-black dress, for instance, is far more beaded and heavily embellished up close.  Her real-life counterpart would have found a dress this heavy difficult to work in on a daily basis.  Her dress would have been made of a plain, light-weight material.  On the other hand, the keys she wore on her person at all times would have been larger and made of heavy metal.  The keys Mrs. Hughes wears are of a much lighter alloy, making them less cumbersome for the actress to wear, and, also, less likely to make a jangling sound that would be picked up by the cameras. 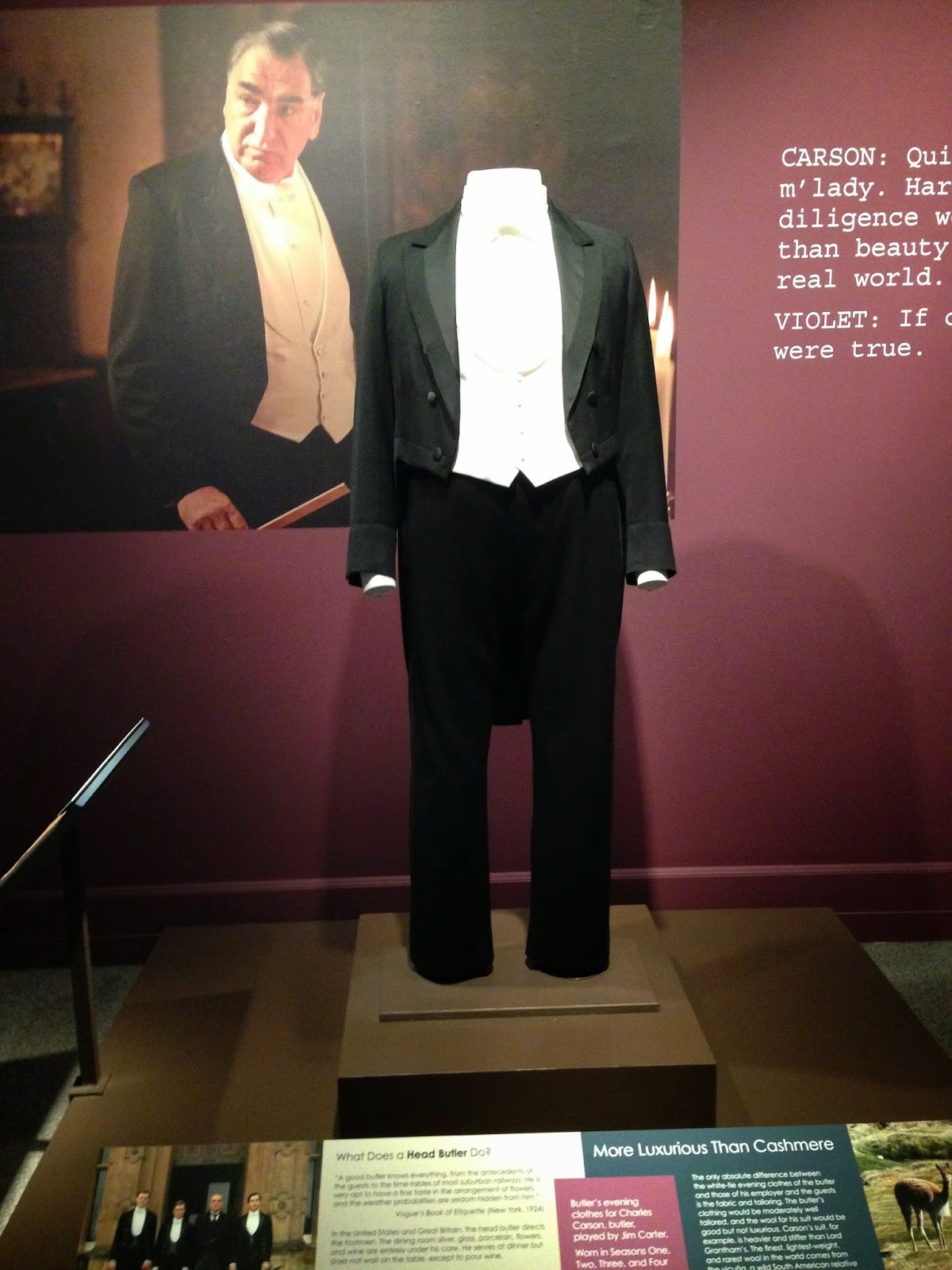 And here he is, Carson, the Butler, the man who keeps everything running smoothly upstairs and downstairs.  Dear efficient, devoted Carson, whose gruffness masks a warm heart and a colorful past.  Although he would be the first to deny she is his favorite, Lady Mary has held a special place in his fatherly heart since she was a little girl.  For me, some of the most touching moments in the Series have been those between Carson and Lady Mary. 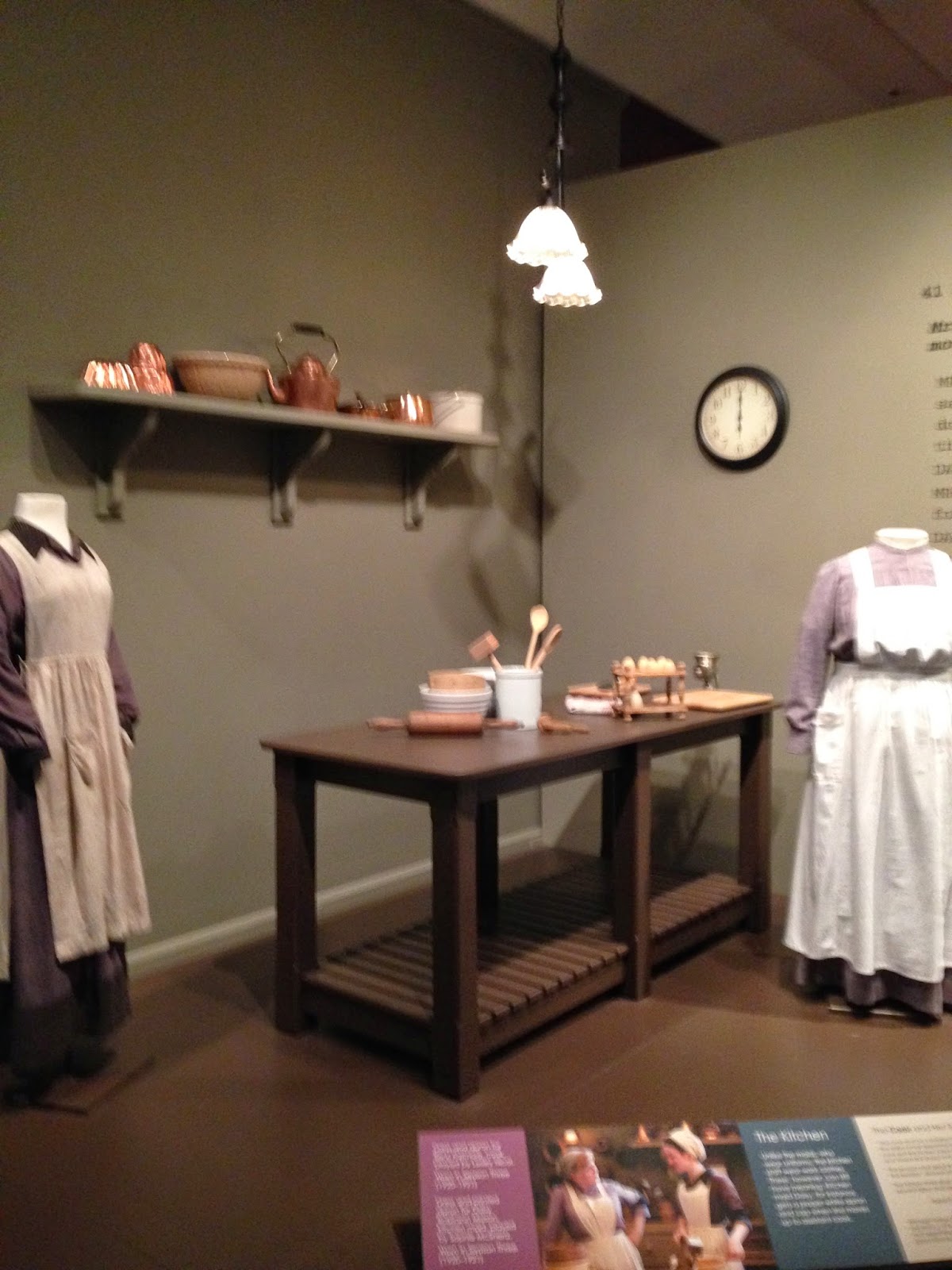 And here we have Mrs. Patmore’s domain – the kitchen.  The costume on the right is hers.   As you  Downton Abbey aficionados know, although interior and exterior scenes are shot at Highclere Castle in Newbury, the Castle’s kitchen has been completely modernized and updated.  So, a period authentic, downstairs kitchen with surrounding areas had to be recreated off site for filming. 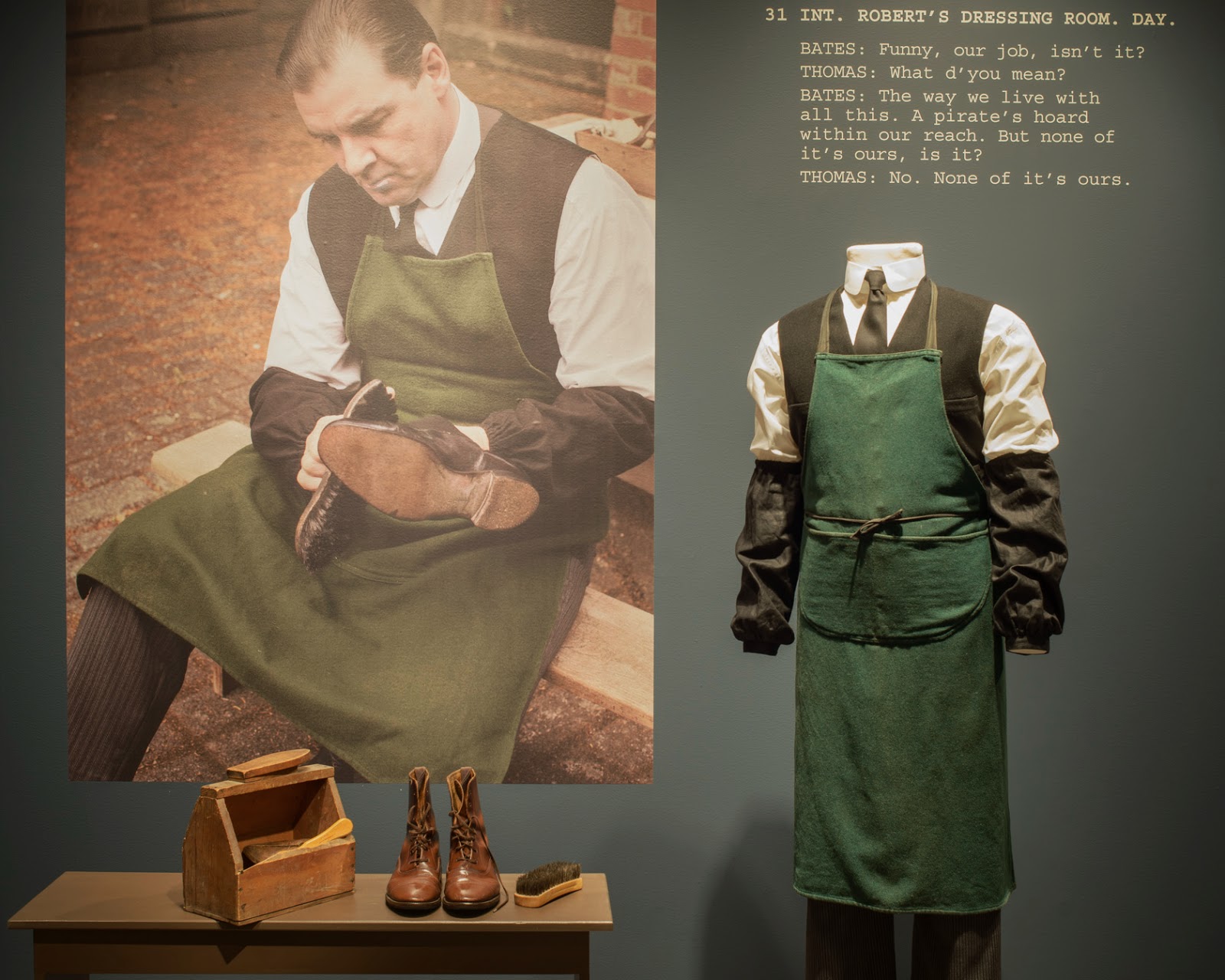 Mr. Bates, Lord Grantham’s valet, is clearly a man with a past (Did he really murder his wife?) and a somewhat unsettled future (Did he murder the man who raped his wife?  Will he be caught?).  The enigmatic Mr. Bates displayed some decidedly violent tendencies while in jail, but, then, he is so loving and tender with his faithful and adorable wife, Anna, that we can forgive him anything.  I know I can.  In fact, Mr. Bates could put his boots under my bed any time and he wouldn’t even have to polish them first.  Shirley MacLaine, who plays Lady Grantham’s mother, Martha Levinson, is on record as saying she’s a huge fan of Mr. Bates.  Can you blame her?

But, before we continue our Downton Abbey costume tour, here’s a little background on Winterthur and the du Pont family.  The landed-gentry worlds of the British Crawleys of Downton Abbey and the American du Ponts of Winterthur during the first half of the 20th century offer many similarities. 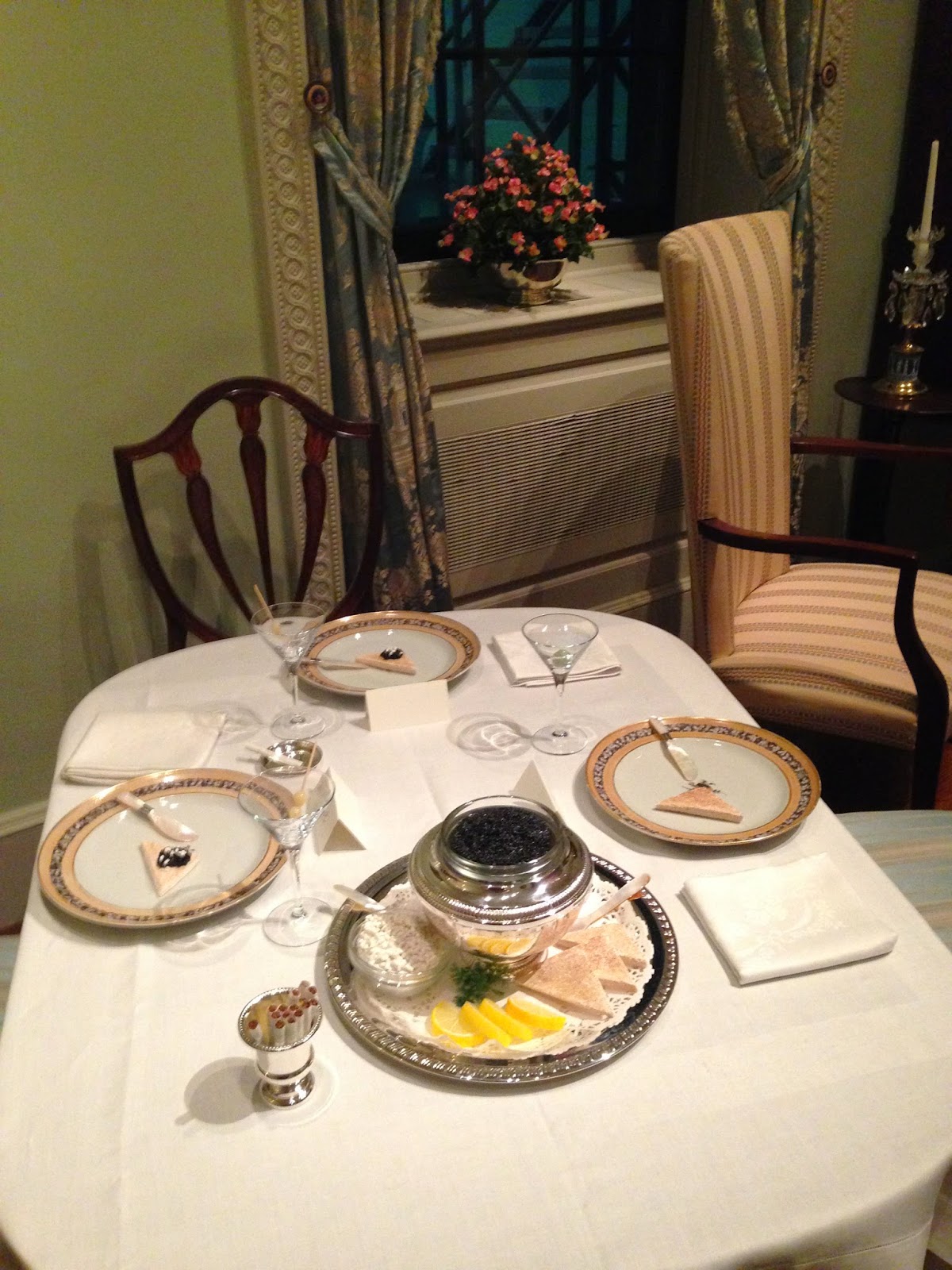 At one time, the Winterthur estate employed as many servants as Downton Abbey and encompassed over 2000 acres of rolling hills in an area of the State of Delaware known as the Brandywine Valley.  Extra servants were often added on the weekends, as Mr. and Mrs. du Pont loved to entertain and did so in lavish style.  The call board for servants at Winterthur had already been converted to a push-button electronic system while Downton Abbey was still using the bell system.

Here we have a table in one of the smaller parlors set for a sumptuous snack of caviar washed down with martinis.  Note the cigarettes in a silver cup.  You’ll find those all over the house and at every place setting in the main dining room.  Yes, everyone smoked back then, and the gracious host and hostess always had cigarettes readily available for their guests.

Here’s something I’ll bet you didn’t know?  The caviar that would have been served was from New Jersey.  Yes, that’s right!  Until over fishing decimated the sturgeon population, the town of Bayside (then known as Caviar, NJ) in Cumberland County was the world’s largest exporter of the “black gold.”


The roots of the American du Pont family begin in France.  In 1784, in recognition of service to the King, Louis XVI bestowed a patent of nobility on Pierre Samuel du Pont de Nemours.  In 1800, only six years after receiving his official Coat of Arms, Pierre Samuel du Pont de Nemours packed up his family and fled post-Revolutionary France for a new start in a new country.  Two years later, his younger son, Eleuthère Irénée, a chemist, founded a gunpowder company, E.I. du Pont de Nemours & Co., and built the first du Pont family home, Eleutherian Mills.

A passionate horticulturalist, Eleuthère planted a magnificent orchard and extensive gardens, a passion which he passed down to each succeeding generation.   In 1816, Eleuthère’s daughter, Evelina, married and built a 12-room Greek Revival house on a 450-acre parcel of her father’s land and named it Winterthur.  In 1867, her son sold Winterthur to his uncle, Evelina’s brother, Henry du Pont.  From that point on, the legacy of Winterthur would forever be linked with the du Pont dynasty.

The glory years of Winterthur were a direct result of Henry Francis du Pont (1880-1969).


Henry was a passionate collector of American treasures, and he expanded Winterthur to house his ever-expanding collections.  He had a very simple rule about what he collected.  He collected it when it was one of a kind and stopped collecting it when it was mass produced.

In 1951, he and his wife, Ruth, moved from Winterthur to a smaller home on the estate.  Winterthur would no longer be a family home, but would be Henry Francis du Pont’s showcase and a major tourist attraction from that day forward.

In 1961, the new first lady, Jacqueline Kennedy, asked Henry to oversee the much-needed renovation of the White House.  He was considered to be the greatest living collector of Americana and an authority on the subject of American historical decoration.  Henry invited Mrs. Kennedy for a private tour and lunch at Winterthur.  She stayed for dinner.

John B. Sweeney, the curator, recalls Mr. du Pont saying, “I don’t know Mrs. Kennedy very well. Of course I have known her mother all her life, but I have a feeling that her real interest is in French things, and she does not believe that you can have a really swell house with American furniture. I wanted her to see that you can.”  (For more about Jackie Kennedy’s visit to Winterthur, see “How Camelot Got Designed:  The First Lady’s Visit to Winterthur”)

The next stop on our tour of the Costumes of Downton Abbey will be upstairs to see what the well-dressed Crawleys are wearing.  You won’t want to miss this.  Stay tuned……

To read Part 3 in the Series, Click here.
Posted by Marie-Thérèse at 12:30 PM