My Excellent Adventure and How I Survived It

If you will indulge me, I am about to do something I rarely do – I’m about to share something intensely personal with you, my dear Readers, because this week is a week to celebrate and I’d love to include you in my circle of celebration.


It all started six years ago following a routine diagnostic procedure.  I don’t think I need to spell it out in graphic detail --- O.K., I will --- it was my first colonoscopy, which I should have had at age 50 but had put off and off and off for years.  It was a beautiful June, and my husband and I were in Lyon for the wedding of the daughter of dear friends.  It was the most beautiful wedding I have ever been privileged to attend, but, let’s just say, I knew something wasn’t quite right.


Things got pretty hectic when we returned home.  Mme Mère needed all my attention following a serious fall while we were away, etc., etc.  Suffice it to say that I finally got around to having that colonoscopy I had been putting off.   The results were not good.  Surgery was scheduled within the week.


The following is the e-mail I sent to concerned friends when I got home from the hospital.

Well, I am finally home from the hospital and, following a few setbacks and complications, am slowly recuperating.  Here are some of the highlights of my week. 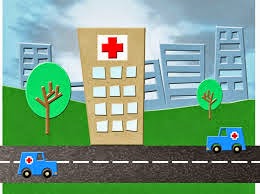 
I arrived at the hospital at 5:30 a.m. (a most uncivilized hour to do anything, in my estimation) and was wheeled into the operating room at 7:00 a.m.  Surgery lasted 6 hours and went beautifully, according to all involved.  (By the end of the week the Pathology Report came back; as my surgeon put it, “Nice clean margins.  We got it all.”  Thank you, Jesus!!!)


I was in and out of consciousness most of the day, but I remember being wheeled into my room and Dan being there.  I also remember hearing loud, angry voices from somewhere near my bed.


I slept on and off.  The room was unbearably stuffy, but I was too medicated to care.  My 88-year-old roommate, Mrs. Blaustein (not her real name), introduced herself, but I was a little too out-of-it to be very social.  She seemed nice enough.  At 11:00 a.m. Mr. Blaustein arrived with their middle-aged daughter.  For the next five hours Mr. and Mrs. Blaustein screamed at each other while the daughter did her best to run verbal interference.   It took a while for me to realize that they were both deaf as posts and that this was their normal communication pattern.  Dan arrived and we tried to have a conversation over the din.  He said I had a little a color back in my face, which made him happy.


After he left, I found out why the room was so stiflingly hot.  Mrs. Blaustein had the air conditioning controls on her side of the room and had turned them off.  When Mr. Blaustein gently pointed out that maybe her roommate (i.e., Me!) might like to have the air on, her response was, “So I should freeze?”  I liked Mr. Blaustein.  Everyone who came into the room complained about the heat, but Mrs. Blaustein would have none of it.  Just when I thought I could take it no longer, a nurse’s aide walked in with a giant fan and set it up right at the foot of my bed.  Blanche Dubois was right to depend on the kindness of strangers.


As Mr. Blaustein left, he patted my foot gently and said, “Feel better soon.”  He would do that on his way out each time.  I liked Mr. Blaustein, though I still wasn’t too sure about Mrs. Blaustein. 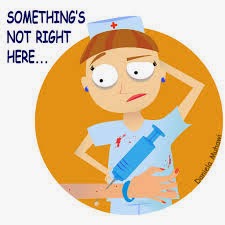 
At 4:00 a.m. I woke up knowing something was very wrong.  I wasn’t sure what it was, but I knew I was having a bad reaction to something.  I was having trouble breathing and started to shake uncontrollably and thrash about.  I ripped off my surgical stockings.  My legs were so swollen from the fluids pumping into me that the stockings had dug two huge welts into my thighs, one of which was bleeding.  Then, in a moment of wild exuberance, I pulled out my I.V. tubes.  There was blood everywhere.  I rang for the nurse.  Jason, the nurse’s assistant, arrived.


Jason reminded me of that skinny kid on TV who used to yell “Dynomite!!!!” every five minutes.  Remember him?  Jason never came in without a smile and something funny to say to cheer me up.  “You’re gonna be all right, Miss Marie,” he said.  “I’m gonna call the Rapid Response Team and we’re gonna take good care of you.”  He was as good as his word.


The Rapid Response Team arrived – well – rapidly.  There were about 10 of them, all female, all in clean, white lab coats, one eating from a container of yogurt; average age about 18.  They looked liked they had just finished their shifts at the Clinique counter at Macy’s.  I was not filled with confidence.  They stood quietly watching me shake, asked me what happened and then began to talk among themselves.


Then one of them looked at me and asked, “Mrs. Norris, are you normally an anxious person?”  I wanted to slap her, but I said as calmly as I could, “I’m having a reaction to one of those damn drugs you’re pumping into me through my epidural line.  Isn’t it obvious?”  After looking at me, taking blood pressure (sky high!!) and heart rate (equally off the charts!!), they hooked me up to an EKG machine, incorrectly, at first.  Good thing Jason was there to show them how.  I was beginning to think I was right about the Clinique counter.


Finally, one of them said, “I think she’s having a reaction to one of the drugs coming through her epidural line, but it’s impossible to know which one.”  I thought I saw Jason smile a little, or maybe I just imagined it.  In any case, the decision was made to give me a sedative to calm me down.   It worked, and I drifted off to sleep.  Dynomite!


A few hours later, I heard Mrs. Blaustein angrily asking one of the nurses what all the commotion had been about.  Poor Mrs. Blaustein!  I actually started to feel sorry for disturbing her sleep at that ungodly hour, until I remembered the air conditioning controls.


Dan arrived a few hours later expecting to see me looking even better than the day before, took one look at me and said, “Jesus, what the hell happened?”


He had to help me eat (actually drink) my breakfast, as I had considerable trouble finding my mouth.


I was feeling better and determined to take my pain management into my own hands.  I rang for the day nurse and asked her to have my epidural line taken out.


She looked shocked.  “I’m not allowed to remove an epidural line.  A doctor has to do that.”


A few hours later she arrived with a young doctor in tow.  He had already read my chart.  I gave him additional details and showed him my bloody thighs.   “No problem,” he said.  He took the line out and added, “If you need any pain meds, just ask.”


In a few hours, the numbness in my legs began to dissipate slightly.  I had turned the corner.


When Dan arrived I was smiling.  “Well, you certainly are full of surprises.” 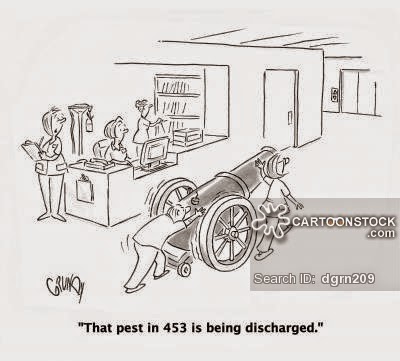 Mrs. Blaustein was released that afternoon.  I got up and turned the air conditioning on full blast.
Day 5 (Friday 9/12)


I am sitting at my very own kitchen table sipping Ginger Peach Tea out of a china cup and watching one of my favorite old movies on TCM – You Can’t Take It With You.


I still have a long road ahead.  We don’t yet know whether the new plumbing will function properly.  My legs are still battered and swollen, I have residual lung and heart problems, which will require follow-up, but Dan is happy, the cats are happy and I am happy.


I am home and Oh, Auntie Em, there’s no place like it.


I did, in fact, recover completely.  If you live long enough, you accumulate milestones along the way – some you prefer to forget, others you choose to celebrate. 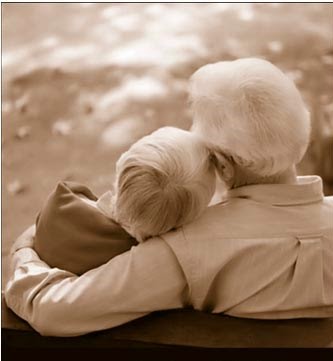 And, if God’s in his heaven and all’s right with the world, Dan and I will grow old together.
Posted by Marie-Thérèse at 12:27 AM