The Best Years of Her Life – Part 1

On Monday morning, June 10th, I got the call from St. Mary’s Catholic Home.  Madame Mère had passed away peacefully in her sleep.  I had been with her only a few days before.  We talked about her birthday in August.  She would be 97.


The day of her funeral was the most beautiful, sunny day we had had in weeks.  I’m sure she had something to do with that.   One by one, my friends came to pay their respects, and one by one each remarked how beautiful she still was at 96.   Whatever else she was or was not, Isabelle was always beautiful.


Not long ago, she told me she was starting to forget some of the details of her past, so I promised to write them down for her, to the best of my ability to remember the stories she had told me over the years.  We worked on it together.  I wrote; she corrected.  The following is an excerpt I entitled, “The Best Years of Her Life.”  This was the part of her life that she enjoyed reading and rereading the most.  I’d like to share it with you now.  I think she would be pleased.


Isabelle puts her budding opera career on hold and decides to do her bit for the war effort. 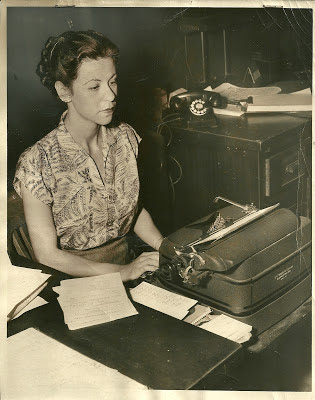 During the day she is a secretary and translator in the Commerce Department....
and evenings and weekends she is a Canteen Girl entertaining the boys on leave and doing her best to remind them exactly what it is they are fighting for.
American, British and French ships are arriving at the Philadelphia Naval Base on a regular basis to be repaired and refitted, and the Canteen Girls do their best to keep up morale, both foreign and domestic.

The Girls have only two Rules:

(1)    Don’t fall for the “I’m shipping out tomorrow and would really like to have something special to remember you by…” line;  and

(2)    Don’t leave the British and French sailors alone together.  (As their Canteen leader puts it, “They may be fighting on the same side, but give ‘em half a chance and they’ll kill each other on the dance floor first.”)

Rule No. 1 notwithstanding, couples are falling in love and getting married at a fairly brisk pace.  For these young men and women dancing in each other’s arms, the real enemy is not Hitler, Mussolini or Tojo -- it is time.  How much time will you have with that shy young man with his arm around your waist?  How much time does he have?  A week?  A month?  A year?  50 years?  There is no time to weigh your options or fret about the future.  You simply follow your heart.


Being perfectly fluent in French, Isabelle is a very-much-in-demand Canteen Girl.


She soon falls for a tall, handsome French sailor named Louis.  He has fair hair, bright blue eyes and a smile that sets her heart on fire.

﻿
Isabelle and Louis become engaged and spend as much time together as possible before he ships out to sea again.

﻿
A few weeks later, Isabelle is notified that Louis’ submarine was bombarded and sunk somewhere in the Atlantic Ocean.  There was only one survivor, and it was not Louis.


In her grief, Isabelle reaches out to Louis’ family in France and begins a life-long correspondence with his only sister, Jeanette.  They share their grief.  Through the duration of the War, Isabelle will send Jeanette packages filled with items no longer available in France:  sugar, stockings and lipstick.  Some slip through, some do not.


The war is over, the boys are home and people begin to build and rebuild their lives.  Isabelle is a contestant on a radio quiz show called “Strike It Rich.”  After several rounds, she is one of two remaining contestants.  Family and friends are listening as the final “Strike It Rich” question is asked:  “What was the name of the Count in the Dreyfus affair?”


Clever Isabelle, always at the top of her class, hesitates not an instant before answering,   “Count Esterhazy.”


She walks away with the grand prize.  When asked by the game show host what she plans to do with the money, she tells him she will use it to go to France to visit the family of her dead fiancé.


The next day, local and national newspapers run the story:  “Local Girl ‘Strikes It Rich’ – Will Use Money to Visit Family of Fiancé Killed in Action.”  She is an instant media sensation. 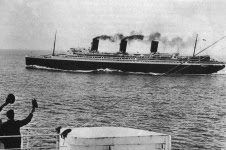 
Family, friends and photographers gather at the New York Pier to see Isabelle off.  She has booked passage on the SS Ile de France.


She shares a cabin with a middle-aged woman who is clearly a seasoned traveler.  The woman’s steamer trunks are plastered with stickers from all over the world.  One enormous trunk contains nothing but hats, which she uses to great effect.  Whenever an errant child gets within arm’s reach, she removes her hat and proceeds to beat the child over the head with it while yelling, “Midgets!!!  Damned midgets!!!  I hate midgets!”  Had she been travelling in 1st Class she would have been called  eccentric; since she was a 2nd Class passenger, she was simply known as the Mad Hatter!


During the voyage Isabelle meets a very attractive Parisian Philosophy Professor named André.  He offers to show her the “real” Paris when they land.  Isabelle sees the advantage of not passing up such an offer.


And so, we leave Isabelle in Paris.  In part 2, she finally meets the family of her first love and finds love with a tall, dark, handsome stranger.   Stay tuned.