﻿
﻿ With any luck, and if the opera gods are smiling on us that evening, all the hard work will pay off for this season’s Opening Night at the Metropolitan Opera.

On Monday, September 24th, the Met will open its season with “L’Elisir d’Amore” (“the Elixir of Love”), a delightful, romantic romp with a happy ending.
﻿
﻿ A brand new production of this beloved opera, there will be a lot riding on the shoulders of its young stars -- the magnificent Russian soprano Anna Netrebko, as Adina, and the superb American tenor Matthew Polenzani, as Nemorino.

Adina is smart, beautiful and the object of Nemorino’s devotion. Nemorino is a simple, country lad who can neither read nor write.

Dismissive of his attentions at first, through a series of hilarious events involving a magic elixir, Adina ends up falling in love with Nemorino, while the audience falls in love with the glorious music.
﻿
﻿ The role of Nemorino, one of the incomparable Luciano Pavarotti’s signature roles, contains one of the most beautiful and difficult arias ever written for tenor, “Una Furtiva Lagrima.”

It is, in fact, the aria everyone waits for. Nemorino has seen a furtive tear (una furtiva lagrima) fall from Adina’s beautiful eyes when she believes that she has lost him forever.

Even though he is off to join the Army, that tiny tear gives Nemorino hope that all is not lost, and he pours his heart, his soul and his love into that aria.

I had the great privilege of seeing Pavarotti perform this role many times, and each time he sang this aria, he brought down the house. 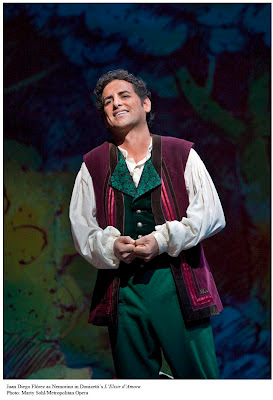 ﻿
On March 31st of this year, the Nemorino of Peruvian tenor, Juan Diego Florez, made operatic history at the Met. My husband and I were lucky enough to be in the audience.

He walked out slowly to the center of the stage, set down his jacket and battered suitcase and began to sing Nemorino’s aria. Within a very few notes, we all knew something special, something magical was happening, as we leaned forward in our seats hanging on every note. No one dared breathe; no one dared move.

As the final note dissolved into the theater, the audience broke into wild applause, stamping their feet and screaming “BRAVO!! BRAVO!!”

The applause began to die down, Florez threw his jacket over his shoulder, picked up his suitcase and turned to walk off stage. Suddenly a man a few seats to my left yelled out, “ENCORE!!”

Everyone laughed, knowing that the Met has a strict policy against singing encores. I had seen it in Europe, but never at the Met. It was unthinkable. But then, the unthinkable happened. Florez turned, looked at the audience, then at the conductor and put down his jacket and suitcase. The audience went crazy!

“I can’t believe it!!” my husband whispered excitedly in my ear. “I think he’s gonna do it again!!!”

And he did! And this time, he sang it not as Nemorino, the timid suitor, but as Juan Diego Florez, the full-throated tenor giving every ounce of himself to an audience which had shown him the full measure of its love. (To hear the aria and encore as it happened, click here.)

Those are the moments, mes chers amis, that keep opera goers like me coming back again and again and again; they are rare, they are precious, and when they happen they stay with you forever. If you get one or two during an entire season, it’s a great year.

After more than fifty years of sitting in darkened opera theaters all over the world, I still get the same tingle of excitement when the curtain goes up. And each new season holds the promise of magic.
Posted by Marie-Thérèse at 5:37 PM