Opening Night at the Met – Then and Now

My invitation to Opening Night at the Metropolitan Opera arrived in the mail last week.


Lest you be too impressed, I must tell you that every Met subscriber and/or Opera Guild member gets invited to Opening Night.

And if you go, you pay a hefty price for the privilege. But it is indeed a privilege. 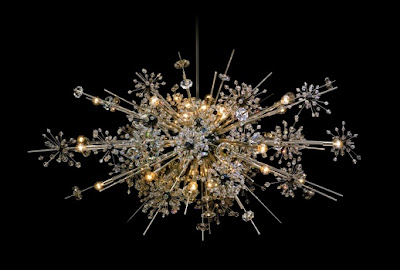 It’s been many years since my last Opening Night, but I do remember how exciting they were – the Opera house at her most elegant, crystal chandeliers sparkling like diamonds, the fragrance of red roses and perfume even more intoxicating than the champagne that flowed freely.


You couldn’t move without rubbing shoulders with the glitterati -- Jackie “O,” a true patroness of the arts, and her sister, Princess Lee Radziwill, movie stars, Broadway actors, TV personalities, politicians and anyone with even the slightest connection to New York’s beau monde were there. It was all very heady stuff.


Then as now, Opening Night is less about opera and more about those who want to be seen and what they choose to be seen in. Think of it as opera’s annual Red Carpet event. 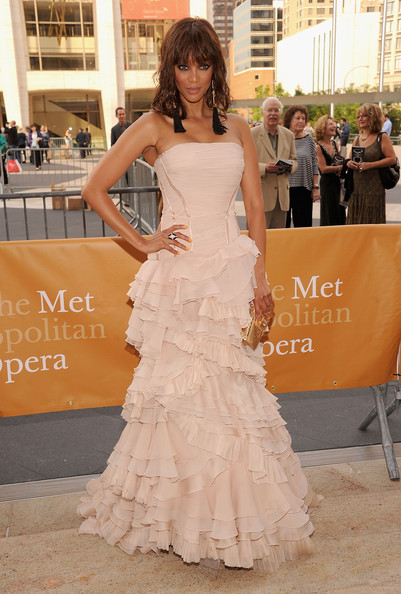 Honors last year for “The Dress” went to the beautiful Tyra Banks in this Roberto Cavalli bias-ruffled confection in barely-there blush. Isn’t it just tooooo gorgeous?


Is Tyra an opera fan? I have no idea. For all I know, she may have showed up, had her picture taken and left before the performance; but there’s no doubt she added a big dollop of Glam to the evening, which is what Opening Night is all about.


There was a time when I would see celebrities not just on Opening Night, but at almost every performance -- Burt Lancaster (a native New Yorker and huge opera fan), Kitty Carlisle, Ted Bessell, Jim Nabors, Ed Bradley, Mikhail Baryshnikov, Tony Randall, too many to mention.


I often saw Tony Randall at the Met. On one occasion he sat behind me and we had the most delightful conversation, one opera-lover to another. He was incredibly knowledgeable and utterly charming. 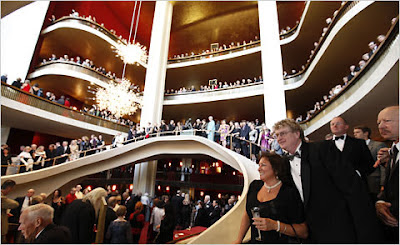 Opening Night this year will be on September 24th.


As usual, the festivities will begin with a cocktail reception in the Grand Tier and a black-tie dinner following the performance.


Not to be upstaged by the glitz and glam of its Opening Night patrons in the Grand Tier, the Met always calls on its heavy hitters for the performance on stage.  Previous Opening Night productions have starred Luciano Pavarotti, Placido Domingo and Renée Fleming, to name just an illustrious few. 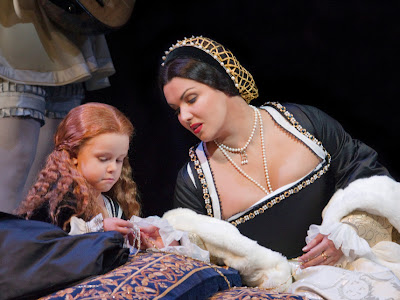 I saw it several weeks later, and I can tell you that it was superb. 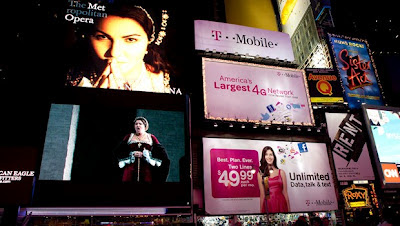 The performance was simulcast live in Times Square. 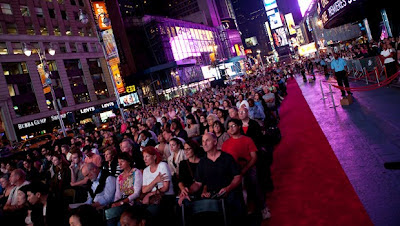 Audiences arrived hours in advance for the privilege of seeing this rarely performed opera with the magnificent Netrebko.
﻿ 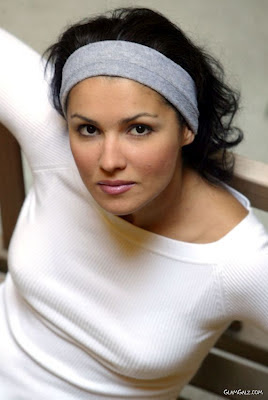 It’s no exaggeration to say that Netrebko is the reigning superstar of the operatic world. And there is little wonder why.

First of all, there’s the Voice, which marries lyric coloratura flexibility and range with an amazing depth of tone.

It has the shimmer of satin, the plushness of velvet and every note is colored with emotion.

Add to that her smoldering beauty, explosive dramatic presence and you have some idea of the excitement this Russian artist can generate during a performance.

She is quite simply mesmerizing. 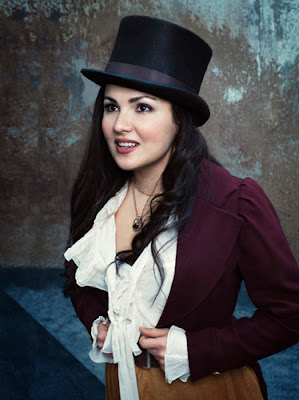 Opening night this year will again star Netrebko, this time in the role of Adina in a brand new production of the delightfully funny and touching opera “L’Elisir d’Amore” (The Elixir of Love).

Did I mention she’s also fabulous in comic roles?

Adina is a more complex character than she at first appears. She is smart, beautiful and the object of Nemorino’s devotion. Dismissive of his attentions at first, through a series of hilarious events sung to the most glorious music, Adina ends up falling in love with Nemorino. The role of Nemorino, one of the incomparable Luciano Pavarotti’s signature roles, contains one of the most beautiful arias ever written for tenor, “Una Furtiva Lagrima.” The wonderful American tenor Matthew Polenzani will be Netrebko’s ardent Nemorino.

Whether sipping champagne in the Grand Tier or swigging water from a plastic bottle in Times Square, my guess is that on Monday night, September 24th, the Opening Night Met audience is in for something truly special. I can’t wait!!