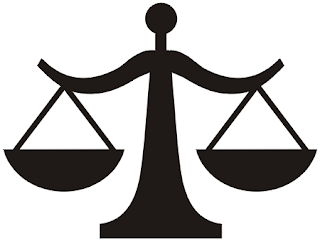 Whether short (me) or tall (my brother), no one in my family has ever had a problem with his or her weight. Other than sweets, which I don’t eat because I don’t like them, I have always eaten whatever I wanted. Basically, my weight has pretty much remained the same within a pound or two either way throughout my adult life. I take no credit for this, because it’s probably genetic.

I mention this not to pat myself on the back but to make the point that I have no personal experience with diets and dieting. The only thing I know about diets is that they work when you’re on them and stop working when you’re not. Other than that, I’m pretty clueless about them. At least, I was………….. 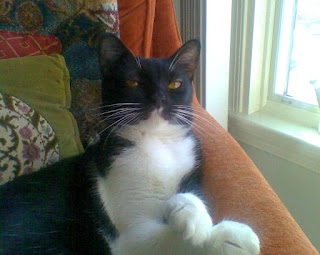 About two years ago, a beautiful black and white kitten with the most amazing copper-colored eyes joined our feline family. I named her Allegra. When I picked her up after her spaying (equivalent to a hysterectomy for a woman) the Vet told me that during the surgery, he removed quite a bit of fat around her stomach.

“Really!” I said in mild surprise. “Do you mean you did a kitty liposuction?”

Although she gets the same amount of food as her brother, Victor, and sister, Cecilia, Allegra has continued to gain weight.

Even my husband, who insisted she was just big boned, has finally admitted that she is somewhere north of chubby. The truth is, when Allegra walks she looks like Tugboat Annie pulling the QE II to shore behind her.

At her last checkup, the Vet said, “Mrs. Norris, your cat is obese and headed for severe health problems if we don’t do something about her weight right now, before it’s too late.” The voice of doom!

Feeling a bit defensive, like an overindulgent Mother, I told him that she got the same food in the same amount as her slimmer brother and sister, which was absolutely true. “It’s not your fault,” he replied. “It’s probably genetic.” 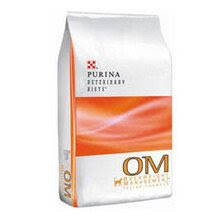 The decision was made to put Allegra on the Purina Weight Loss Program. A pretty and perky young thing named Krista introduced herself to me as Allegra’s Weight Loss Coach. My husband and I left with a big bag of OM (overweight management) food and a file folder full of useful information on feline obesity, nutrition, coupons and charts to track her progress. Wow! Who knew?

Tuesday night was Allegra’s first weigh-in. I am happy to report that she has lost 8 oz. (1/2 a pound) to everyone’s delight. I got a “Good job, Mom!!” from an enthusiastic Krista and Allegra got a big hug from her Weight Loss Coach and a gold star on her chart with a little kitty smiley face next to it. My husband and I were all smiles, too. Allegra was less enthusiastic and headed straight for the safety of the cat carrier in anticipation of the trip home. Her next weigh-in is in April. We’re all keeping our fingers and paws crossed that things continue in the right direction and Allegra gets another gold star on her chart. I’ll keep you posted.

The following day I visited Madame Mère at St. Mary’s Catholic Home where she has been a resident for the last three years. When I walked in, she was clearly in a state of high anxiety.

“I have a big problem,” she replied. “My clothes don’t fit anymore. I think I’m gaining weight. That’s never happened to me before,” she moaned.

“Well, it’s normal to gain some weight as you get older,” I said. “After all, you’ll be 96 this year. I guess it’s about time you gained a pound or two; however, if you’re concerned about it, you can go on a diet, or exercise a little bit or, maybe, one glass of wine at dinner instead of two? I’ve been reading a lot about nutrition and diets lately, maybe I could………………”

“JUST GET ME SOME NEW CLOTHES!” she said. Problem solved.
Posted by Marie-Thérèse at 2:56 PM