Grab the Cats and the Kelly and Go!

Well, by the time she reached us, the full-blown fury of Hurricane Irene turned out to be just a two-year old throwing a temper tantrum, thank Heaven; nevertheless, I always like to be prepared, and I was. By that I mean I had prepared a survival kit containing everything a woman needs to look her best while braving a disaster of the natural or unnatural variety. 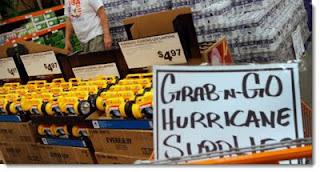 My survival kit included Q-tips, cotton balls, safety pins, lingerie, tinted moisturizer, concealer, lip gloss and Deva Curl Mist-er Right revitalizing spray in case, among other indignities, I had to face a case of the frizzies.

My husband left the office early and was just getting home as I assembled survival kit, cat carriers and a large black plastic bag in the foyer waiting for the signal to Grab-n-Go. He looked at the plastic bag and said, “Is that what I think it is?”

Indeed it was. That plastic trash bag contained precious cargo. Inside, nestled in its brown velvet, drawstring pouch in its original orange box was my black pebbled leather 28 cm. Kelly bag with brushed silver hardware.

Moments of crisis often force you to make cold, clear-eyed choices, and I had made mine. I would leave behind my entire collection of Hermès jewelry, accessories and scarves, but, come hell or high water, the Kelly was coming with me.

My mind travelled back more than 25 years to a blustery night in December. A blizzard had knocked out the power lines and I was wearing two heavy sweaters to keep warm, wrapping Christmas presents by candlelight and singing “Jingle Bells” softly to myself when the phone rang. My husband was calling from the office. There were no cell phones in those days.

“I’m leaving the office now. Can you be ready in 10 minutes? We have to get up to King of Prussia a.s.a.p.” King of Prussia was at least an hour and a half away from our house on a clear night with no traffic.

“Are you crazy? It’s Friday night before Christmas. The traffic will be horrendous!”

“Don’t worry, nobody’s crazy enough to be on the road in this blizzard.”

“So, why are we risking life and limb to get to King of Prussia?”

“Well, Gisèle called and your new Kelly bag is in.”

“I’ll explain everything in the car on the way up.”

As we drove through the snow storm, he told me the whole story. 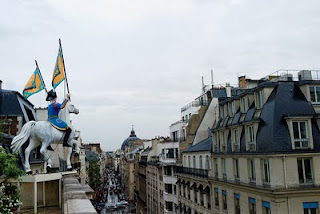 Several years earlier while in Paris we had stopped at Hermès on the rue du Faubourg Saint-Honoré for some of my favorite perfume, “Rouge.”

In the display case way above my head and far, far out of reach in every way was a gorgeous Kelly bag in royal blue crocodile.

Whatever I said about it, and I honestly do not remember what it was, it set my husband on a three-year odyssey through the idiosyncratic labyrinth of the world’s most luxurious of all Houses of luxury handbags, Hermès.

Along the way, he would endure shocks, insults and obstacles sufficient to dampen the fervor of most men, but my husband is not most men. He was a man on a mission.

The first thing he did upon our return stateside was to call Hermès in Manhattan. When he asked the officious Frenchman on the other end of the line the price of a Kelly bag, he received his first shock. Upon recovering from the shock of the price, he pulled himself together and said, “Well, I’d like to order a Kelly bag for my wife.” The stunned salesman replied, “Non, non, non, non, non, Monsieur, you do not ‘order’ a Kelly bag, you ‘await’ a Kelly bag. They are made, they are shipped, you wait. Et voilà!” 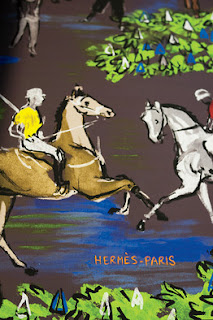 For an entire year my husband repeatedly called New York, Paris and Los Angeles, always with the same result. They would not even deign to put his name on the waiting list.

Then one day, while on business in King of Prussia, Pennsylvania, he found a tiny Hermès boutique in the shopping mall. He thought he’d give it another go.

A saleswoman named Gisèle was behind the counter that day, and he told her the whole sad story. She took pity on him.

“Eh bien,” she said, “the 28 cm Kelly will be a perfect fit for her. We don’t receive many in that size, but I will put your name on the list et on verra.”

Two years later, on the Friday before Christmas, Gisèle called my husband at the office. Because of the blizzard she was unable to reach the three names ahead of ours on the list. So, if we could make it to the store before closing, the Kelly bag was ours.

Or maybe it’s just that I own a piece of French culture that is timeless – its roots firmly in the past, giving vitality to the present and life to the future. That is the essence of the house of Hermès.

Whatever it is, I knew for certain that I wasn’t going to let that Bitch Irene come anywhere near my Kelly.
Posted by Marie-Thérèse at 11:19 PM