In Helena Frith Powell’s delightful book All You Need to Be Impossibly French, the pre-pubescent author meets Sophie, a Parisienne so impossibly chic that she is, so to speak, the word made flesh. Sophie tells her that all she really needs to be a Frenchwoman are two lipsticks and a lover. And one of those two lipsticks should be a luscious shade of red. This simple, straightforward statement puts the priorities of the Frenchwoman into perspective.

When Eurodisney (now known as Disneyland Paris) opened to the north of Paris in 1992, my friend, Sandrine, thought it might be fun to work there. Upon applying for a position, she was told that female employees were not permitted to wear red lipstick. Her choice was either pale pink or none at all. “Quelle horreur!”she responded and walked out on the spot, as did many more like her, until the Disney people finally came to their senses and changed the policy. 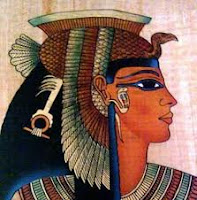 Some form of enhancement of lip color has been around since Cleopatra smeared a concoction mixed with iodine and poisonous mercury onto her lips to give her pucker a lethal punch.

The first modern lipstick in a metal tube, the product of a French chemist, was born in the 1920s and baptized “Rouge Baiser” or “Red Kiss.” And at about that same time in America, the Revson brothers created a new company and launched Revlon’s own line of luscious red lip colors followed a decade later by nail polish to match. While there is some question as to whether “Revlon Red” predated “Rouge Baiser,” there is no question about their effect. Suddenly, for the price of a tube of lipstick, any woman could look and feel like a Hollywood film star.

Fall is the perfect season to find your perfect shade of red. Overnight, cosmetics counters have gone from the bright pastels of summer to the golden russets and deep burgundies of fall, and somewhere within that range of rich colors is a red lipstick with your name on it. For those of you “d’un certain âge” or who have full or thin lips and have been told to avoid red altogether, I have only one word to say – “Nonsense.” Simply avoid dark, matte reds and opt for clear, more translucent reds that complement your skin tone. Cool skin tones look best in blue reds (think deep rose) while warm skin tones look best in yellow reds (think juicy tomato).

I found my perfect shade of red, “Poppy,” at the Laura Mercier counter, and every time I slip it on I think about impossibly chic Sophie and wonder if she is right. Are two lipsticks and a lover all a woman really needs? Probably not, but it’s a great place to start!
Posted by Marie-Thérèse at 3:23 PM